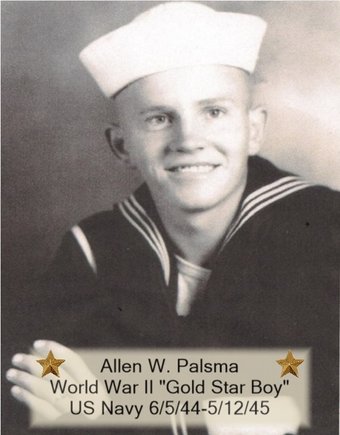 By the fall of 1944, the Japanese forces had been routed in almost all areas of the conflict in the Pacific.  It was at this time that a very young Allen Palsma, just out of high school in Springfield, South Dakota, began his service in the Pacific Theater of the war.  Allen was born to Dutch immigrants Auke Palsma and Willemke Rienstra on January 18, 1925 on the family farm near Avon, South Dakota.   Following graduation from Springfield High School, Allen went to Tyndall, South Dakota where he was transported to Omaha, Nebraska for his pre-induction physical and enlistment into the United States Navy on June 6, 1944.  His next stop was Faragut, Idaho, where, on September 19, 1944, he completed his basic training for the Navy.   On September 22, 1944, he joined the USS New Mexico in Bremerton, Washington, where it was being repaired from previous action against the Japanese in the Pacific.  On October 25, 1944, Allen and his shipmates began their journey to the South Pacific to join in the effort against the Japanese.

During the next months, Allen and the USS New Mexico were involved in the liberation of the Philippine Islands from the Japanese by playing key roles in famous decisive battles at the Leyte Gulf in the fall of 1944 and the Lingayen Gulf in January of 1945.  By this time, the Japanese were desperate and began launching suicide kamikaze attacks at US Navy ships.  Allen’s battleship, USS New Mexico, was constantly exposed to these attacks.

After the liberation of the Philippine Islands and some needed repairs in Hawaii, the USS New Mexico returned to the action by beginning preparations for the invasion of Okinawa.   May 12, 1945 proved to be a fateful day for Allen Palsma.  He had attended a bible study just forty minutes before he was called to duty.  It was about dusk when the USS New Mexico was approaching its berth in Hagushi Anchorage.  Two Japanese Kamikaze planes began to attack the ship. The second plane skidded across the upper deck, exploded and burst into flames, killing 54, seamen including Allen.  A memorial service was held the next day aboard the ship.  Allen’s remains were then transported to Okinawa Island for burial. Since the United States was still at war with Japan, Allen’s remains were not exhumed and brought back to Springfield until 1947.  Allen was posthumously awarded the Purple Heart for “military merit and wounds.”   On June 22, 1945, memorial services for Allen were held at Emmanuel Reformed Church in Springfield.