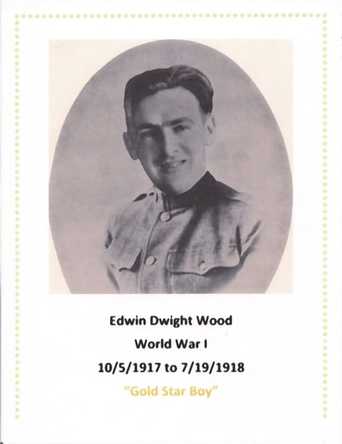 Dwight Wood was the first Springfield area “Gold Star Boy” of WWI.  He was killed in action the morning of July 19, 1918, of wounds received from German machine gun fire while advancing with his regiment’s assault on German Army forces entrenched in the French town of Chateau-Thiery.  The battle raged along the “Paris Road” between the towns of Missy-aux-Bois and Ploisy.  It is believed that Wood was temporarily interred in a grave somewhere along that road but his family was never able to acquire confirmation from the War Department, as to the exact location of his permanent grave somewhere in France.  His mother received word from the War Department, on August 27, 1918, that her son had been wounded on July 19, 1918.  It wasn’t until January 15, 1919, that she received the news of his death.  At the time of his death, Wood was serving with “L” Company, 26th Infantry Regiment, First Division, A.F.A.O., US Expeditionary Army.  The Springfield American Legion Post is named in honor of Dwight Wood.

Dwight was born in Greenwood, SD on October 24, 1895, but the family soon moved to Springfield where he grew  to manhood.  He was the youngest of four children of Mr. and Mrs. E.D. Wood.  Dwight attended school in Springfield.   In 1916, he enrolled as a student in the International Correspondence School of Scranton, PA where he received a graduate certificate in mathematics and also studied electrical engineering.  It was his ambition to continue his education and become an electrical engineer.  Early in 1917, to acquire money to continue his education, he went to Everett, Washington to work with his brother E.V. Wood  in the lumber and furniture business.

His career plans were cut short following America’s declaration of war against Germany on April 6, 1916. At that time, the US was almost totally unprepared for the conflict that lay ahead.   The war in Europe had been raging since July 28, 1914 between America’s allies, France, Britain and Russia against Germany and her allies.  By 1916, the global conflict had developed into a stalemate in Europe where trench warfare resulted in tremendous loss of life on both sides, especially in the Army infantry.    At the time of America’s declaration of war, the US held a standing Army of only 100,000 troops, ranking 17th among all other countries worldwide.   In December 1916, Dwight went to Bremerton, Washington to enlist in the US Navy but failed the physical.  Then he attempted to enlist in the Army Air Corp but failed again because no more men were deemed needed in that branch.   A mandatory military draft registration was enacted for service in the Army and Wood was among the very first called to service early in 1917.  This time, he was found physically fit for service and was inducted into the US Army and stationed at Fort Lewis, Washington, where he received a month of basic training.  In November 1917, he was reassigned to Fort Mills, Long Island, NY and initially attached to Company D, 161st Infantry Division in preparation for deployment to France.  His Division reached France in December 1917 and was then assigned to the staging areas near Is-sur-Tille.     By the end of the “Great War”, November 11, 1918, over two million US troops would serve in the fields of France.

In June 1918, the 161st was divided to fill up depleted regiments and Dwight was assigned to Co. L, 26th Infantry Division I, “Yankee Division”.   He and his Division fought in the Battle of Belleau Wood, in June of 1918, where US sustained casualties of nearly 10,000 troops, including almost 2000 KIA and another 2000 MIA.  Total allied casualties exceeded 150,000.   However costly in lives this battle was, it stopped the German advance of nearly 50 Divisions from proceeding deeper into France.  Immediately following Belleau Wood, allied forces went on the offensive and into the battle of Chateau–Thiery where Wood was killed.  Many historians contend that the battles at Belleau Wood and Chateau-Thiery marked the turning point of WWI.   The breakout of Allied Forces and the sustained, fierce and terribly costly battles that followed eventually lead to Germany’s surrender and the Armistice of November 11, 1918.  Edwin Dwight Wood is listed on the “Tablets of the Missing" at Aisne-Marne American Cemetery, Belleau, France.   The Springfield American Legion Post commemorates the service of Dwight Wood and all WWI Veterans by placing a wreath in his honor during their annual Memorial Day ceremony.   A significant amount of information for this biography was obtained by the author from a history written by his mother, Mary E. Wood, for the Woman’s Auxiliary, Dwight Wood Post #132.  Mrs. Wood’s history, written sometime following the War, was in turn compiled in part by reference to several letters she received from other WWI Veterans and Regimental Officers that served alongside Dwight.