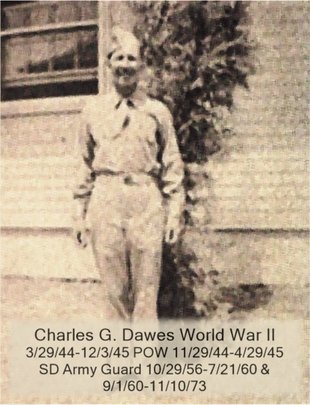 “Men, today is the first day of the rest of your life.”  Wise words coming from a National Guard platoon sergeant to his platoon in the 1960s, a man who knew firsthand the wisdom of those words and the prudence of living by them.  Twenty years earlier that platoon sergeant was a private just out of high school joining an effort to rid the world of the worst despot ever foisted on humanity.

On October 20, 1944 Charles “Chuck” Dawes along with the 103rd Infantry (Cactus) Division arrived in Marseilles, France to relieve the battered 3rd Division.  Charles, getting ready to celebrate his 19th birthday on November 23, had joined the army soon after finishing high school at Springfield, South Dakota.  Little did he realize at the time that less than a week later on November 29, 1944, members of the German Army would interrupt his celebration in a big way.

Charles entered the United States Army on March 29, 1944.  He had spent his entire life in Springfield, so the war experiences that were ahead of him would test his thus far unproven ability to adapt to whatever circumstances he found himself in.  On the night of November 29, 1944, the circumstance he found himself in was that of a prisoner of war (POW).    Because of the increased activity, Charles and the soldiers he was with knew the Germans were getting close.  However, they were surprised in the middle of the night by a knock on the door of the building they inhabited by a German demanding that they come out or they were going to grenade the building.   The group of 65, that Charles was with, had an orderly surrender and they were taken away without anyone being hurt.

After capture, Charles and the rest of the captives began a grueling march, with little food or water, to their destination at Stalag VII A in Moosburg Germany.   The prison camp was designed for 10,000 prisoners, but by the end of the war detained 80,000 prisoners.  The prisoners’ biggest threat along the march was not the German guards, but the French people who were incensed by the war.  The prisoners arrived at Moosburg in relatively good shape considering the circumstances.

At Moosburg, Charles and his fellow captives, settled into a routine of entering boxcars in the morning and traveling to Munich where they spent the day moving dirt and rocks and other obstacles blocking the streets of the city, the result of allied bombings.  Charles and the other prisoners’ biggest problems at Stalag VII were hunger, boredom, air raid alarms, personal hygiene, and being away from Americans.  Because of the Red Cross markings on the roofs of their prison quarters, they were protected from allied bombings.  For food, the prisoners were provided baked potatoes and bread.   Their hunger was somewhat mitigated by the POWs secretly trading cigarettes for food with the locals.

Late in April, the prisoners knew they were in for a change as the sound of the war got closer.   The fighting came close to the camp as guards were seen being shot out of towers.  On April 29, 1945, Charles and the rest of the prisoners were liberated and prepared to return home.  Finally, on June 4, 1945, all the paperwork was in order and Charles returned to the United States to finish his tour of duty.  After his discharge on December 3, 1945, he return to his life in Springfield South Dakota.  Charles would later add to his service to the country by serving another 20 plus years in the National Guard.  Reflecting back, Charles realized that while his existence during the five months of imprisoned hard labor without a shower, clean clothes or a decent diet was miserable and inhumane, none of his fellow prisoners had been severely mistreated or tortured and unlike the Japanese prison camps most of them survived.