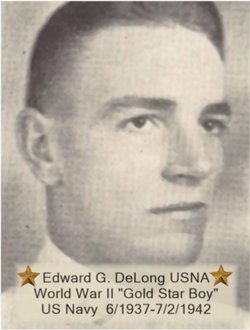 Springfield has plenty of Veterans with military service worthy of a motion picture.  In fact, Springfield has a Veteran who was part of a small force in the Philippine Islands, whose heroics were depicted in the book and motion picture “They Were Expendable” starring John Wayne. The military service of E. Grover DeLong is one of exceptional personal bravery and heroism, excellence in leadership, extreme devotion to the men under his command, and tragically, ending at age 27, with his ultimate sacrifice.

Grover was a graduate of Springfield High School, attended Southern Normal for one year, decided on a Navy career, was appointed to the U.S. Naval Academy at Annapolis, and graduated from there in 1937.   Following graduation, Grover immediately entered active duty with the U.S. Navy.  During his initial years of service, he was stationed at a California naval base where he taught gunnery and received extensive specialized training as an engineer of PT Boats.  The torpedo boat was a comparatively new addition to the U.S. Navy.  A small wooden boat, the PT, about 40 feet long, was usually powered by two high-powered gasoline motors.  Although vulnerable in its construction, the PT was fast, reaching up to 75 miles per hour; a small target; offensively armed with four torpedoes and machine guns for defense.  The PT was an ideal craft for close-in combat, raids, rescue, and patrol duties among the thousands of islands in the South Pacific.

On August 19, 1941, Grover was assigned overseas duty in the Philippines Theatre of Operations.  He quickly advanced in rank and responsibility, applying his training with the PT boat and soon found himself as commander of Motor Torpedo Boat PT-31, of Motor Torpedo Boat Squadron 3.   Grover’s and America’s direct involvement in the war with the Empire of Japan was only four months away, beginning December 7, 1941, when Japanese naval and air forces conducted the sneak attack at Pearl Harbor.  Immediately following, Japan attacked American bases throughout the Philippines closing in on Manila. They systematically backed the U.S. forces down the Bataan Peninsula, and later to the island of Corregidor.  DeLong’s PT squadron was instrumental in the evacuation of troops and supplies from Bataan to Corregidor and made history in these early and darkest days of the Pacific War by its raids on Japan’s shipping in the Manila area.

DeLong had a number of narrow escapes during the raids in enemy waters.  On the raid of January 20, 1943, his boat was grounded, due to engine failure.  To prevent his vessel from falling into enemy hands, he destroyed the boat and its torpedoes, and then directed the transportation of his crew by night through reef-studded water to the enemy shore where they avoided capture and eventually found their way back to allied Philippine forces.  When it became evident that no immediate help was forthcoming from the United States, remaining U.S. forces on Corregidor were forced to surrender on May 6, 1942.   DeLong was one of a number of key people to be flown out of Corregidor on the last day.  His plane was forced down by engine trouble on the island of Mindanao where DeLong and the other passengers hid in the jungle to avoid capture.  The plane was repaired, but left without Grover and the other passengers.  Stranded and alone in enemy held territory, he and a few others initially avoided capture and attempted to escape to the island of Borneo by use of a small native craft and homemade sail. Tragically, this attempt failed.  The Japanese captured Lieutenant Grover DeLong and he was executed on July 2, 1942.  He was posthumously awarded the Navy Cross and Silver Star.  He is buried in Arlington National Cemetery.