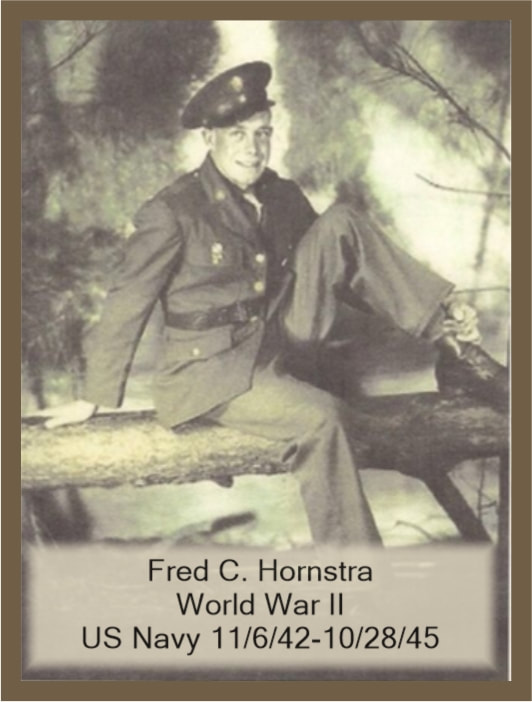 For most of America’s new soldiers, the training had been going on for two years in almost every part of the country.  By the spring of 1944, it was time to get the job done.  The necessary forces had gathered in England to accomplish the mission.  At Normandy, the Allies put 175,000 troops on shore on June 6, 1944.  However, it would take two million to get the job completely done so an orderly introduction of the remaining two million took place in the next months.  The 11th Cavalry’s turn finally came on November 23, 1944. The men of the 11th Cavalry were about to get a baptism by fire and one of those soldiers was Fred Hornstra from Springfield, South Dakota.

Fred Hornstra was 21 years old working in a factory in Michigan area when he was drafted in 1942.  He, along with all the Springfield area young men, were being drafted and sent off to all parts of the country for training.  Fred took his basic at Fort Leonard Wood, Missouri before being assigned to Troop A of the 44th  Reconnaissance Squadron of the 11th Cavalry Division where he would spend 26 months as a Light Truck Driver and seven months as a squad leader.

On June 1, 1944, Fred and the rest of the 11th Cavalry reverted to the control of the Army Ground force at Camp Gordo, Georgia for some extensive training before boarding the SS “Cilicia”at Pier 48 in New York and on September 29, setting sail for England, arriving on October 10.  After a beachhead had been established at Normandy, the allies were ready to move the Germans out of Northern Europe.  In moving his huge force across Northern Europe, Eisenhower divided the force into two thrusts, the North thrust led by British Field Marshall Bernard Law Montgomery and the South Thrust, led by Omar Bradley.  After a month of preparation, on November 23, 1944, the 11th Cavalry with its two squadrons of trained soldiers including Fred Hornstra, moved on to the continent.  They had been attached to the 9th Army which was part of Eisenhower’s North thrust so were assigned to the British 21st Army Group, a move still being criticized today.  Americans want their soldiers to be commanded by only other Americans.

By the time the 11th Cavalry arrived on the continent, the Germans had been routed and chased across Northern Europe and had taken up defensive positions along the German border to protect the homeland.  By December 11, Fred and his squadron had moved into position on this line, probably thinking the war was almost over.  Within a few days, the division found out differently.  In what would be called “The Battle of the Bulge,” at 0530 on December 16, the Germans made a last desperate attempt to break out through the Ardennes Forest and sprint for the warm water port at Antwerp, Belgium.  A few days before the German breakout, The 11th Cavalry had taken positions near the Roer River, just north of the Germans’ breakout.  The events of the next few days of the German breakout will not soon be dimmed in the memory of Fred and the rest of the 11th Cavalry.  Now, with all the veneer of military glamour torn away, the 11th Cavalry became acquainted at first hand with true ugliness of war.  There was the intense cold, the ever-present semi-frozen mud, the deadly whine and sickening crunch of the 88’s, the staccato reverberation of the burp guns, and the incessant falling of mortar shells out of nowhere.  During one of artillery attacks, Fred had a round from an 88 land just a few feet from him. The concussion threw him into the air, covering him with mud and debris, but left him physically intact. Luckily, it was a dud that did not explode. A buddy seeing his shell shocked condition volunteered his R&R time so that Fred could recover. He later said that he owed his sanity to his buddy and his life to a “Jew that peed in the powder”.  (Note – The Nazis used the imprisoned Jews in the camps to build munitions and they did what they could to render them defective.)

The results of ‘Battle of the Bulge removed any doubts anyone may have had as to who was going to prevail in the European portion of WWII.  However there was plenty of war left to finish off the Germans and Fred Hornstra and the 11th Cavalry would have a front row seat, as they would be in the thick of it.  By now, Fred had become a squad Leader and had the tremendous burden of accomplishing his missions while keeping about ten men healthy and alive.  In combat, squad leaders may be the most important leadership positions on the battle field.   Fred noted that in combat the common German soldiers were honorable people not unlike the American GI’s. The SS troops however were fanatics even among their own people and often paid the ultimate price for their actions.

As the war progressed toward Germany, the talk began about who would have the honors of leading the offensive into Germany. For some inexplicable reason, Eisenhower picked Montgomery in the North to lead the final offensive into Germany which directly affected Fred Hornstra because the 11th Cavalry was assigned to the British 21st Army Group.  The plan was to cross the Roer and move to the Rhine as quickly as possible and cross it and then move to the Elba River deep inside Germany.  On February 23, the offensive began with the 11th Cavalry exploding across the Roer making its way to the Rhine River.  The action was fast, furious and dangerous.  The distance was covered quickly until the allies got closer to the Rhine.  The 11th Cavalry crossed the Rhine at Wesel, and headed for the Elba.  The battle continued to be fierce and intense along the 378 miles traveled in 21 days.  The Group captured 5,927 prisoners and 655 of the enemy were killed or wounded.

Linkup with the Russians was made on May 6 as the Group hosted five officers of the Red Army. V-E Day found the 11th Cavalry in Kunrau, Germany.  It was over for Corporal Fred Hornstra and the rest of the 11th Cavalry.  He had just spent about six months collecting experiences that he would keep for the rest of his life.  He had been a part of the end to the greatest threat to world order up to that point.  He was awarded the Eamet Campaign Medal with two Bronze Service Stars and the Good Conduct medal.  Fred returned via the Queen Mary  from Europe on August 2, 1945 and was discharged at Fort Bragg, NC on October 28, 1945.  He returned home to Springfield and spent the rest of his life quietly farming and raising a family, comfortable with the knowledge that he had served his country in its hour of need.