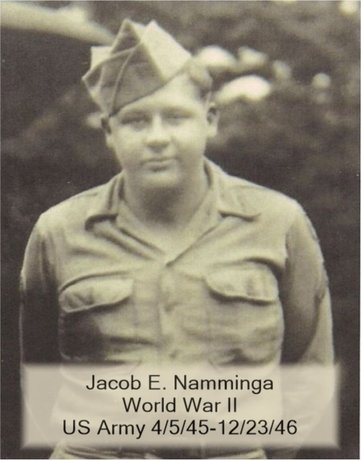 General Douglas MacArthur was probably the most controversial general in America since the Civil War.  He was courageous in WWI, brilliant in WWII, and unresponsive and insubordinate in the Korean War.  What he is not as well known for but may be his finest accomplishment is directing the reconstruction of Japan after WWII.  His success is reflected in the democratic industrial free market giant that Japan has become today.  However, this eccentric leader would not have had a chance at success in Japan if he had not been able to rely on steady reliable young men brought in after the war to provide stability during the first crucial months of the Japanese experiment.  They came from all parts of America to keep Japan in business, which was so important those first few months after the end of the war.  One of the thousands of these men that MacArthur was dependent on was Jake Namminga from Southeastern South Dakota.

Jake registered for the draft in Tyndall and was drafted in the Army on April 5, 1945.  His physical exam was at Ft. Snelling, MN, after which he was shipped to Camp Livingston, LA for six months.  President Roosevelt died and the Germans surrendered while he was at boot camp.  Jake spent some time at a camp in Northern Florida for a week before boarding a train for Portland Oregon.  Before he departed, Jake recalls watching movies that indoctrinated them to dislike the Japanese.  “By the time we were ready to leave we were pretty tough.”   Jake shipped out for the Pacific from San Francisco aboard  the  USS  Mayo.
Jake was assigned to the 25th Infantry Division (Lighting Division”), 8th Army, which had come from Luzon, Philippine Islands.  When they arrived at Yokohama at the end of October of 1945, there were not a lot of people.  Slowly, the citizens came down from the hills. Some of them didn’t look well.  His first duty was to act as a longshoreman, which meant that he assisted in the process of removing supplies from boats to the docks. He first worked in the hatch. Whalers lifted the goods out of the hatch via crane and onto the dock.  Jake used a forklift to transport the goods around the warehouse.  He asked for another duty and was transferred to mail duty.  The mail was delivered to him and he would drop it off in each city as he passed by on the coal-fired train. He traveled to Osaka, Kobe and Tokyo.  This was intra-mail.  His route ended in the south.  He would then bring mail back to the north.

Jake saw Tokyo, which was black.  Buildings were destroyed.  The locals often disliked the American presence.  The Japanese did not have enough food.  When working on the docks, Japanese worked with them, mostly hungry young kids.  Locals would take gallon cans, pick up scraps from their garbage and then sit next to the soldiers to ensure that no one took their food.  He saw many Geishas. “I felt sorry for these girls.”  Parents would prostitute their daughters.  Both Generals Eisenhower and McArthur came through their area.  He was ten feet from the prior.  He also ran into several people in Japan that he knew; ie, his brother-in-Law, Clarence Ludens, Duane Hubregtse, Grimme, Don Fryda, and Fenema.

Jake left Japan on October 28, 1946 aboard the USS Marine Serpent, satisfied that he had been a small part in the Japanese reconstruction experiment that would prove to be successful beyond anyone’s prediction.  Jake returned to Yankton on December 24, 1946.  He was discharged at Ft. Lewis, Washington on December 23, 1946.