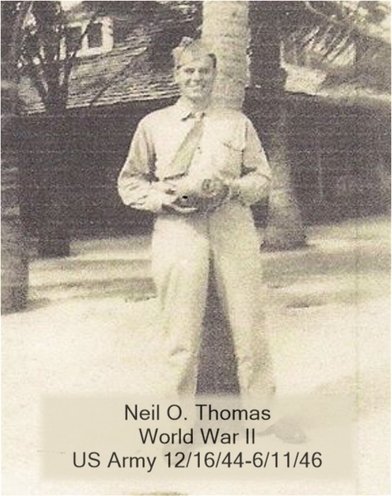 As the wars in the Pacific and Atlantic theatres continued in the early 1940s, the young men and woman who were drawing closer to the age of induction into the service were wondering what the future held for them.   With allied prospects looking grim in Europe with the beginning of the Battle of the Bulge, and problematic with the Japanese use of Kamikaze attacks and the vow of the Emperor to defend the Japanese homeland to the last person, Neil Thomas from Springfield faced his future with uncertainty.

After his advanced training, Neil was told that he would be assigned to the Aleutian Islands.  However, with the victory in Europe over the Axis powers, the orders for Neil and many soldiers were changed.   While his original orders were for him to depart from Ft. Mead in Maryland to the Aleutian Islands, the change or orders sent him to Seattle, Washington in preparation for what he thought would be an assignment in the Islands of the South Pacific.

The fear of the convoy being attacked by the enemy was real but the trip to Hawaii was uneventful, other than the discomfort of a South Dakotan being exposed to sea sickness.  When the convoy arrived at the Hawaiian Islands, Neil found that he would be permanently assigned to the 16th Coast Artillery Regiment of the U.S. Army.  Specifically, his unit was Battery B, 97th AAA Gun Battalion.  Due to an injury, sustained while on duty, Neil was assigned to limited duty and during that time, President Truman made the decision to use atomic bombs to convince the Japanese to end the war.  It is estimated that thousands of American GIs’ lives were saved by using the bomb to eliminate the need for an invasion of the Japanese mainland.  In bringing the war to an end, Neil’s duty assignment was changed to provide for guarding the perimeter of the Hawaiian island of Oahu.

As soldiers with more time in service were rotated to the mainland for discharge, Neil was retrained to operate the permanently located and semi-mobile howitzer guns that were located at Diamond Head.  When operating the guns, Neil’s job was to determine and monitor the azimuth, which measures the elevation of the guns as they were fired.

One more duty assignment before being transferred to the mainland placed Neil in charge of one of the NCO clubs on the island.  In May of 1946 he shipped out for San Francisco, took a train to Ft Leavenworth, Kansas where he was discharged on June 11, 1946.  Neil obtained the rank of Private First Class and received the American Theater Ribbon, Asiatic-Pacific Theater Ribbon, Good Conduct Medal, and Victory Ribbon.