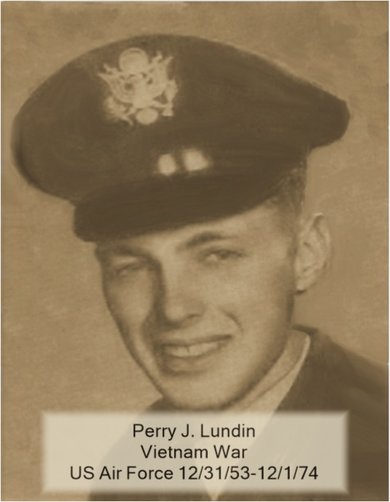 Major Perry Lundin grew to manhood on the family farm west of Springfield.    He acquired his elementary and high school educations at Perkins and Kirkwood Rural Schools and Springfield High School.   Perry pursued college at South Dakota State University.  During his third year at State, he thought it certain that he was going to be drafted into the Army.   The Korean War had just ended a few months earlier.  However, the continuation of the Cold War between the United States and her allies and the communist governments of the Soviet Union and China was of grave concern.   The need for a strong military was believed to be imperative for America’s survival.  The draft was still present and thousands of young men continued to be called up to serve.  Perry’s preference was to fly planes, so he elected to enter the Aviation Cadet Program.

He volunteered for military service in the United States Air Force and was inducted in December of 1953.   On December 31, 1953,   Perry entered the Pre-flight Phase of pilot training at Lackland AFB in San Antonio, Texas.  In 1954, Perry was transferred to Spence AFB, Moultrie, Georgia and completed his Primary Flight training.  Later in 1954, Perry transferred to Goodfellow AFB, San Angelo, Texas where he completed Basic Flight training and graduated on March 30, 1955 as a rated pilot with a  commission of 2nd Lieutenant.

Perry’s next stop was Wheelus AFB, Tripoli, Libya where he flew C-47 transports in base support and had various desk jobs.  He was promoted to rank of 1st Lieutenant in September 1956.  In January of 1957, Lt. Lundin spent nearly three years attached to the 379th Bomb Squadron, 310th Bomb Wing at Smokey Hill AFB (later named Schilling AFB) near Salina, Kansas.  While at Schilling, his unit was assigned to Nuclear Alert Duty flying bombers (B-47’s) to England on a rotational basis and later to Alaska.  While there, the pilots lived next to the aircraft, ready to launch at any time.

In his next assignment from June of 1960 until June of 1966 with the 596th Bomber Squadron stationed at Dow AFB SAC, Bangor, Maine, Perry served as Co-Pilot and Aircraft Commander flying B-52 Bombers on 24 hour airborne nuclear alert sorties.  When not flying, he stood week long ground alerts.   Lt. Lundin was promoted to rank of Captain in October 1962.

In June 1966, Cpt. Lundin was re-assigned to the 60th Bomber Squadron stationed at Ramey AFB, Puerto Rico.  He continued duties as a B-52 Aircraft Commander and also served as an Instructor Pilot in B-52 and C-54 aircraft.  While at Ramey, he also had various administrative duties.   Cpt. Lundin’s next assignment, July 1968, was at Shaw AFB in Sumpter, South Carolina where he checked out in the EB-66 electronic countermeasures aircraft.

After his duty at Shaw was completed, Perry was scheduled to transfer to Thailand when his orders were changed to Osan AFB, South Korea.  In 1968 and 1969, Perry worked in the command center at Osan as a Staff Officer for the 314th Air Division, where he flew C-47’s again.  Lundin was promoted to Major in March 1969.

In January 1970, following his stay at Osan, Perry was sent back to B-52’s at Carswell AFB, Fort Worth, Texas and was assigned to the 7th Bomb Wing as the Wing’s Air Weapons Officer in support of the Southeast Asia conflict.   While at Carswell he flew the B-52 and the Airbase T-29.

Major Perry Lundin retired from the Air Force at Carswell AFB receiving an honorable discharge on November 30, 1974.   Perry’s military career extended over twenty years during which time he served in many capacities including bomber pilot, transport pilot, instructor, and administrator.   He earned numerous commendations and promotions to his final rank as Major, US Air Force.   Following his discharge, Perry completed his education at East Texas State with a degree in Industry and Technology and pursued a civilian career in both the auto parts and restaurant businesses.