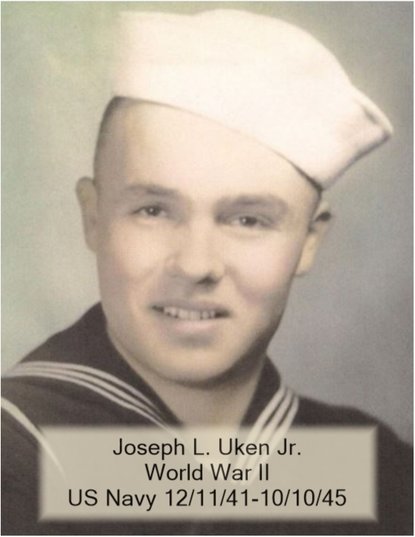 Some say Joe Uken was the luckiest man to have worn a naval uniform during WWII.  Joe missed the sinking of two submarines due to fortuitous reassignments.  In both cases, all crewmen were lost.  In a third instance all the crew, including Joe, survived the grounding on a shoal.  The submarine, however, was lost.

During his 3½ years of service on four different submarines, Joe took part in numerous war patrols.  He routinely experienced the mental terror of depth charges launched at his boat.  The war patrols he took part in varied widely and included the USS Triton’s (SS 201) patrolling Alaskan waters, the sinking of numerous enemy ships, the USS Gudgeon’s (SS 211) rescue of 28 men on Timor Island and the landing of six  soldiers on the Philippine Islands to facilitate guerilla movements there.

Joe enlisted in the Navy on December 16, 1941 at the age of 20.  His basic training took place in San Diego, California.  His demanding rigorous submarine training took place in Hawaii.  To qualify for submarine duty, candidates had to pass a series of physical and mental tests to ensure they were able to withstand the extraordinary demands of duty in the tight confines of a submarine.  At the conclusion of his training May 6, 1942, Joe joined the crew of the USS Triton (SS 201), on which he took part in two war patrols before being reassigned to the USS Gudgeon (SS 211) as an electrician’s mate (EM).  It was during this time that Joe would complete the training necessary to earn the coveted Submarine Warfare Insignia (Dolphin) pin indicating Joe was qualified in submarines.

Tragically, six months after Joe was transferred to the USS Gudgeon, the Triton was sunk with all hands lost.  During his 11 months of service on the USS Gudgeon, Joe took part in four war patrols.  On August 3, 1943 he was transferred to the US Naval Hospital at Treasure Island, California for surgery.  Once again, after his transfer, tragedy struck - his former ship, the Gudgeon, was lost with all hands.

Most historians would probably agree that the outcome of the war was probably certain after the success of the US at the naval battle at Midway and the ejection of the Japanese from Guadalcanal.  Senior Japanese military leaders might even agree.  However, because of the Japanese suicidal sense of honor, the war was far from over and many battles were yet to be fought to convince the Japanese people that continuing the war effort was insane.

After a very short stint on the USS Ciro, Joe’s was assigned to the USS Darter (SS 227).  He was to be involved in four war patrols with the Darter, the last one in the Leyte Gulf playing a very significant and important role in maybe the most important naval battle in the Pacific War.

By the fall of 1944 the Japanese forces had been routed in almost all areas of conflict.  A stand at Leyte Gulf in the Philippines was beginning to emerge where the Japanese felt they had a last chance to change the momentum of the war and the Americans were looking for a knockout blow of the Japanese Navy.  Leyte Gulf was becoming the focal point because MacArthur had made one of his famous beach landings on Leyte Island and his forces needed to be protected from shelling from the Japanese Navy.  The problem was locating the Japanese fleet and engaging them before they could cause problems for MacArthur’s forces on land.  Into the search arrived the Darter with Joe Uken aboard along with its companion submarine the USS Dace (SS 247). The Darter was on its fourth war patrol and along with the Dace was patrolling the waters of the Leyte Gulf.  Little did the crews know that they were about to cement their place in naval history by locating the Japanese fleet, sinking two heavy cruisers (the Maya and Atago) and putting a third heavy cruiser (the Takao) out of service.   In positioning to finish off the Takao, the Darter ran aground on a shoal and had to be abandoned with no loss of life.

With the Japanese fleet located, the United States fleet was able to engage it.  Despite some blunders by Admiral Halsey and even bigger blunders by the Japanese Navy in not exploiting Halsey’s mistakes, the United States fleet was able to route the Japanese fleet to never become a major factor for the rest of the war.  Joe Uken’s military career had been full of near misses but was topped off by being part of the crew on a submarine that played a very critical role in one of the most important naval engagements in the Pacific War.

During his military career Joe received the “Good Conduct Medal”, the “Submarine Combat Service Medal” (for actions while serving on the USS Darter) and most prestigious of all, the Gudgeon received the “Navy Unit Citation” (ship equivalent to the individual Silver Star).

Having risen in rank to an Electrician’s Mate Petty Officer First Class, Joe finished his war experience attending further electrical training in Pittsburg, PA.  On June 22, 1945 he joined a large portion of the former USS Darter crew, including Captain David McClintock, on the newly commissioned submarine USS Menhaden (SS 337).  Joe ended his service October 10, 1945 and returned to his home in Springfield, SD.