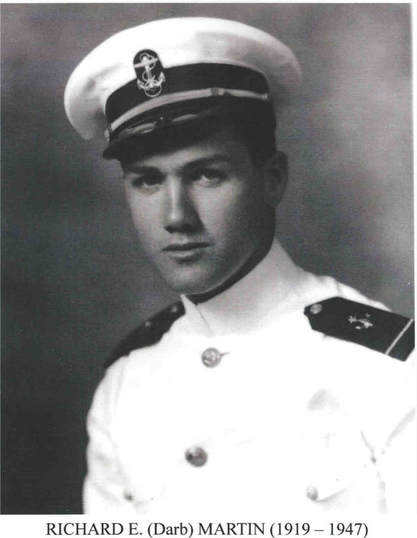 Richard Edward Martin (Darby) was born on December 31, 1919 on a farm near Perkins, South Dakota and died tragically on June 2, 1947 in Springfield of incurable Hodgkin's Disease . After graduating from Springfield high School in 1937, he attended Southern State Normal School two years before entering the United States Naval Academy in the  summer of 1939.

Diagnosed with Hodgkin's Disease at the Naval Academy, he had to resign from the academy his sophomore year and returned to South Dakota where he obtained his bachelor's degree from Northern State Teachers College in late 1941. He taught and coached at Springfield High School for a year and then went to California where he was employed in research work for the Navy at California Institute of Technology (Caltech), where he received many awards for his work.  After the war, he returned to South Dakota, where he worked for the state and helped his brother, Jack, with coaching the Southern football team. However, his incurable disease continued to take its toll and he died on June 2, 1947.

Darby was appointed to the United States Naval Academy (Navy), where he was famous for his prowess on the basketball court culminating in hitting the key baskets in beating Army in the 1941 rivalry game. Later, after being diagnosed with Hodgkin's disease, the army coach sent a letter to Darby "expressing his regret concerning Darby's illness and of his confidence that the spirit he displayed on the basketball Court against Army and in life would carry him through the fight he had ahead of him."

Darby was highly thought of by all who knew him and had many accolades paid to him, for example:
Those who grew up with Darby in Springfield described him as a "Peach of a Guy." Recollections by some women who were his students the year Darby taught at Springfield High School recall that all of the girls in the  high school had a "crush" on him. In one story typical of high school girls at a slumber party, it was decided to make an anonymous telephone call to Darby and ask him what color of pajamas he was wearing. Immediately recognizing the voice on the telephone, and using her name, Darby said he was not wearing any.

Darby spent his last days at Sacred Heart Hospital in Yankton. He was in terrible pain from the Hodgkin's disease, mostly headache pain. His mother (Nana) spent as much time with him as she could. His young nieces, Jackie and Mary Pat, were there and remember that Darby wanted to see his little girls one last time, but the nuns didn't think it was a good idea. In a rare act of civil disobedience, Darby's mother and sister conspired to  sneak the  girls in to see Darby by hiding them in the waiting room, and when the coast was clear of  nuns, scooted the  scofflaws into Darby's room where they had an affectionate few minutes one last time together with him. As an indicator of how popular Darby was, the funeral was so well attended that the Catholic Church in Springfield could not hold everyone so a loud speaker  was installed outside so those who could not  get in were able to hear the service.