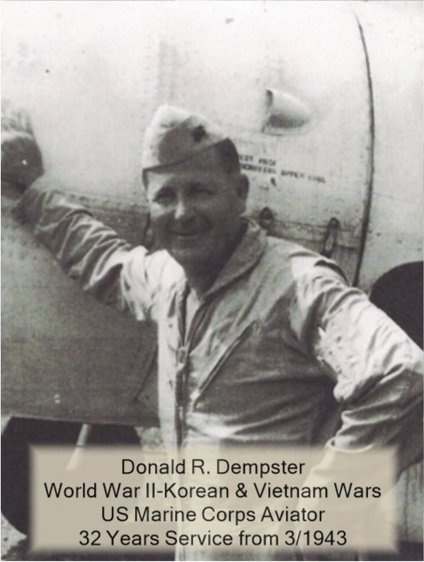 In 1940, against all odds, a passion for flying was born in a teen on a farm near Springfield, South Dakota.  Don Dempster was born and raised on a farm north of Springfield.   His love of airplanes started at about the age of five when his parents took him to see a ‘barnstormer’ performance. The ceiling in his room was covered with airplane models he put together and every afternoon at five he would watch the mail plane fly over the farm.

Don joined the NavCad program in November of 1942 during his sophomore year at Southern State Teachers College.  He was called for active duty in March of 1943.  He was sent to Iowa City for three months of physical training and then to Dallas, TX for flight training, to be followed by training in Pensacola where he received his wings on May 19, 1944 and advanced flight training in Jacksonville, Florida.  On 13 August 1944 Don and Charlene (“Spot”) McCollum were married when Don was home on leave prior to duty in El Toro, CA.  His training in California was mainly ‘close air support’ for the invasion of Japan.  He was sent to Okinawa for this purpose, but the war ended while he was aboard ship.  Don spent time in Japan and China after the war and returned to the United States in July of 1946 for duty in Florida as flight instructor and in North Carolina with VMF-225s.

On June 25, 1950, hordes of the North Korean’s People’s Army crossed the 38th parallel into South Korea and the Korean War began.  In a colossal blunder by the Soviet Union, the United Nations was able to dodge a Soviet veto and, led by the United States, entered the war on the side of South Korea.  By early July, American forces arrived and took over leadership of the United Nations Command.

After the end of WWII, the United States Military was allowed to shrink to dangerous levels.  Mobilizing quickly, the United States began the long process of augmenting its forces in South Korea.  In March of 1951, Lieutenant Dempster deployed to Japan and joined VMF-312 flying the F4U-4 (Corsair) off the USS Bataan aircraft carrier.  Its mission was to escort friendly ships and blockade enemy craft on the west coast of Korea along with providing close air support over the Western half of Korea for both US Army and Marine ground forces.  VMF-312 ended its duty in June of 1951 having lost three of its pilots to enemy action.

In June of 1951, Lieutenant Dempster joined VMF-323 on board the USS Sicily.  The VMF-323 (Death Rattlers) were tasked with naval gunfire spotting, close air support for ground forces, armed reconnaissance, and combat air patrol; all in support of an ongoing blockade of the Northeastern coast of Korea.  On June 20, the Allied offensive ceased as peace negotiations began at Panmunjom.  For the next three months, until his tour ended in November, the primary mission of Captain (promoted in May) Dempster and VMF-323 was the blockade of both the Northwest and Northeast coasts of Korea.  The combat missions continued to be dangerous and by the time Captain Dempster finished his tour in November, the squadron had lost six more pilots to enemy action.  In one particular harrowing mission for Don, his wingman was downed with Don’s corsair sustaining damage.

During his combat tour in Korea, Captain Dempster flew seventy-five missions earning the Air Medal with three stars.  In later years when reminiscing about the Korean War, his fellow pilot friends, who flew off inland airfields, complained about how tough they had it living in tents with mud everywhere and how good Don had it on the aircraft carriers with clean beds and hot food.  Don had to remind them that when they returned from a mission, they always knew where their airfield was but he had to find his in the middle of the ocean.

For the rest of his 32-year career, Don successfully completed the Marine career schools, Command and Staff School and Naval Warfare School.  He experienced a wide variety of jobs in a wide variety of places.  Continuing as a fighter pilot, his jobs ranged from S-4 at Kaneohe, Hawaii to S-3 at Atsugi, Japan to Inspector General at Cherry Point, North Carolina and a host of other diversified jobs throughout the country.  Standing out as a highlight in his career was a stint in England as a commanding officer of a RAF Control and Reporting Squadron, thought to be the first time a Marine fighter pilot commanded a RAF Squadron. Another highlight in his career was commanding officer on May 15, 1964 of eight Marine Fighter Squadron 451 pilots on a record breaking flight from Rota, Spain to MCAS, Beaufort, SC.  Colonel Dempster’s  most important job, though, came in 1968 in Vietnam, as G-2 (Air Plans and Operations intelligence) at MACV headquarters in Saigon.  MACV was the nerve center for the American War effort in Vietnam.  The year at his position was made even more demanding by the Tet offensive in February and its effect generally on the war effort and specifically on Saigon.

After almost 32 years and three wars, Don Dempster retired in 1975 with the rank of Colonel at Cherry Point, North Carolina.  In an unlikely story, the rural teen with a passion for flying had packed a great deal of excitement, adventure, experience and danger into 32 years.