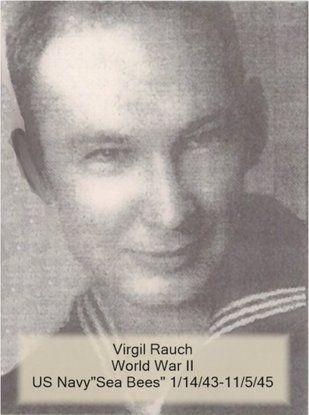 When one thinks of war, one naturally thinks of the horror of the battles. This is natural because it is the most emotional part of war-making and therefore gets more attention than the tremendous amount of support activities necessary to conduct the war.  Far more personnel are necessary for the support activities than for fighting the battles.  In the warfare of the mid-twentieth century, this was especially true due to the advances in military technology and the tremendous amount of equipment and construction necessary to fight the war.

The Navy's answer to this necessity was the creation of the Seabees.  The name "Seabee" came from Construction Battalions (CBs).  Naval Construction Battalions were first introduced into the Navy in June of 1942.   More than 325,000 men served with the Seabees in World War II, fighting and building on six continents and more than 300 islands. Seabees are made up of the toughest, most resourceful and energetic bunch of builders, dockwallopers, repair men, and anti-boobytrap operators in the military.  Many, due to the expertise necessary, were recruited from the civilian construction trade and were older (average 37 years) than the average soldier.

The over-all Seabee organization is broken down into five different types of units, each having a high level of specialization.  One of these units is the construction battalion.  Each member of the construction battalion is a specialist in some area but often finds himself helping in other areas.  One of the Seabee construction battalions was the 70th US Naval Construction Battalion and one of its members was Virgil Rauch.  Virgil Rauch was teaching in Billings, Montana, when World War II broke out on December 7, 1941.  He had been teaching welding at Billings Polytechnic Institute before joining the Seabees in Oklahoma City on January 14, 1943.  He was shipped to Camp Perry, Virginia for basic training.  Virgil was identified for his expertise in welding and was given special handling to take advantage of his welding skills.

Virgil joined the 70th US Naval Construction Battalion and was with them in April of 1943 when they landed in North Africa.  Their job was to support allied actions and the landings in Sicily and Italy.  Virgil had a first class rating and was in charge of a welding crew whose job it was to build five Marine Railways in North Africa, which were used to repair and service landing craft used in the invasion of Italy and Normandy.  After completion, the 70th Battalion left for home, arriving on Christmas Day 1943.  He was assigned to company B stationed in Rhode Island and on to Camp Parks, California.  From there, the 70th embarked for the Pacific Theatre on October 19, 1944.

The strategy in the Pacific was two-fold in defeating the Japanese.  The Navy's strategy was island hopping across the Pacific, pushing the Japanese back to Japan.  This required the Seabees to construct airstrips, bridges, roads, gasoline storage tanks, hospitals and housing on each island.  They often operated under fire and frequently were forced to take part in the fighting to defend themselves and their construction projects.  Virgil and the 70th Battalion's first stop was Hawaii.  Virgil's B Company was moved to Guam to build battalion headquarters for the 70th and the Amphibious Forces Pontoon Assembly Yard.  Virgil was part of the company that was involved in supporting the 5th Marines in the invasion of Iwo Jima and Okinawa.  At Iwo Jima, the job was to transport Marines and their supplies.  During the operation, their LST was bracketed by mortar shells.  They were saved by an alert destroyer that took out the mortar nest before they were hit.   Virgil was on deck duty and said he did not have time to be scared.  Also, he noted that he did not know how anybody survived on that island, as it seemed the entire island lit up with fire.   On the fifth day, Virgil was shipped to Guam, and then on to Saipan for three weeks, where his welding skills were needed to construct an airfield.  On Christmas Day, Virgil was assigned to an LST (Landing Ship Troop).  Each LST carried about 300 Marines.  They had a few days of anti-aircraft practice and then went on to the invasion of Okinawa. There, he had a night welding crew on an LSD (Landing Ship Dock) to repair damaged barges (barges were used to transport food and supplies or as makeshift roads to enable trucks to drive to shore).  Virgil was at Okinawa for about three weeks.

V-J Day came at a time when the 70th Battalion was reunited on Guam.  The plans were preparing for the invasion of Japan.  With the war over, the plans were converted to plans for the support of occupation.  The war over, Virgil returned home and was discharged on November 5, 1945.  He ended as a Ship Fitter First Class, V-6 and received the American Area Campaign Medal, European-African-M.E. Campaign Medal, Asiatic-Pacific Area Campaign Medal and the World War 2 Victory Medal.  After being discharged from service, Virgil finished his college degree at Rocky Mountain College in Billings, Montana and obtained a graduate degree at the University of Minnesota.  He spent time teaching high school and working at various jobs before he accepted a position at Southern State College in Springfield.  There, Virgil taught machine shop and basic tool and die making for nineteen years. He spent the rest of his life raising a family and teaching at Southern State College in Springfield, South Dakota.