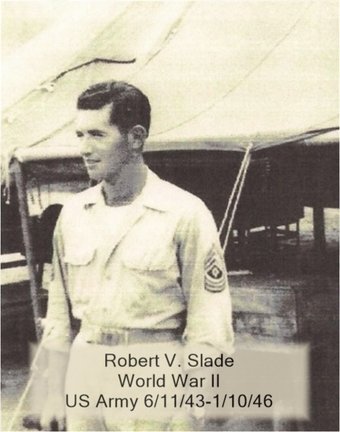 Beginning in 1943 into 1944, millions of America’s youth prepared for the mammoth effort to push the German Army out of its new found gains in the Atlantic Theater and collapse the Japanese Greater East Asia Co-Prosperity Sphere in the Pacific Theater.   Soon after Pearl Harbor, General MacArthur had been caught unprepared by the advancing Japanese and routed out of American holdings in the Philippine Islands.  Upon leaving the Philippines, General MacArthur boldly proclaimed “I shall return.”

Working their way across the Pacific were numerous military units fulfilling different roles in addition to training for its ultimate mission of helping MacArthur retake the Philippines.  Among the units was the 161st Infantry Regiment as part of the 25th Infantry Division.  In the 161st Infantry Regiment was Robert Slade from Springfield, South Dakota.  Bob had been attending Southern State Teachers College in Springfield when the United States entered the war.  Bob answered the call and entered the army on June 11, 1943 at Fort Leavenworth, Kansas.  He did his basic training at Fort Ord, California and shipped out to Auckland, New Zealand to join the 161st Infantry Regiment of the Tropical Lighting 25th Infantry Division.  After ten more months of training at New Caledonia, Guadalcanal and Manus Island, Bob Slade and the rest of the regiment and division were ready to assist General MacArthur in fulfilling his pledge to return to the Philippines Islands.

On January 11, 1945, two days after General MacArthur had made his second highly publicized walk through the water onto the beach at Lingayen Gulf, Slade and the rest of the 25th division began their role in liberating the Philippine Islands by hitting the San Fabian area of Lingayan beach and beginning three months of intense combat in MacArthur’s northern advance on the island of Luzon.  The division met fierce resistance at Binalonan Village, San Manuel, and Balete Pass.  They took many casualties including the Assistant Division Commander, Brigadier General Dalton.  Company E saw five company commanders killed in four days.  The northern advance was successful and the Japanese were eliminated as a threat in the northern part of Luzon.

Japan surrendered in August of 1946.  With the end of the war, First Sergeant Slade and the rest of the 161st infantry Regiment were sent to Japan for occupation duty.  The 161st Infantry Regiment received the Philippine Presidential unit Citation for Valor and First Sergeant Slade received the Bronze Star, Combat Infantry Badge, Asiatic Pacific Theatre Ribbon, Good Conduct Medal, and Philippine Liberation Ribbon.  On January 10, 1946, Sergeant Slade was discharged at Fort Leavenworth, Kansas and returned to Springfield where he spent the rest of his life farming and raising a family.