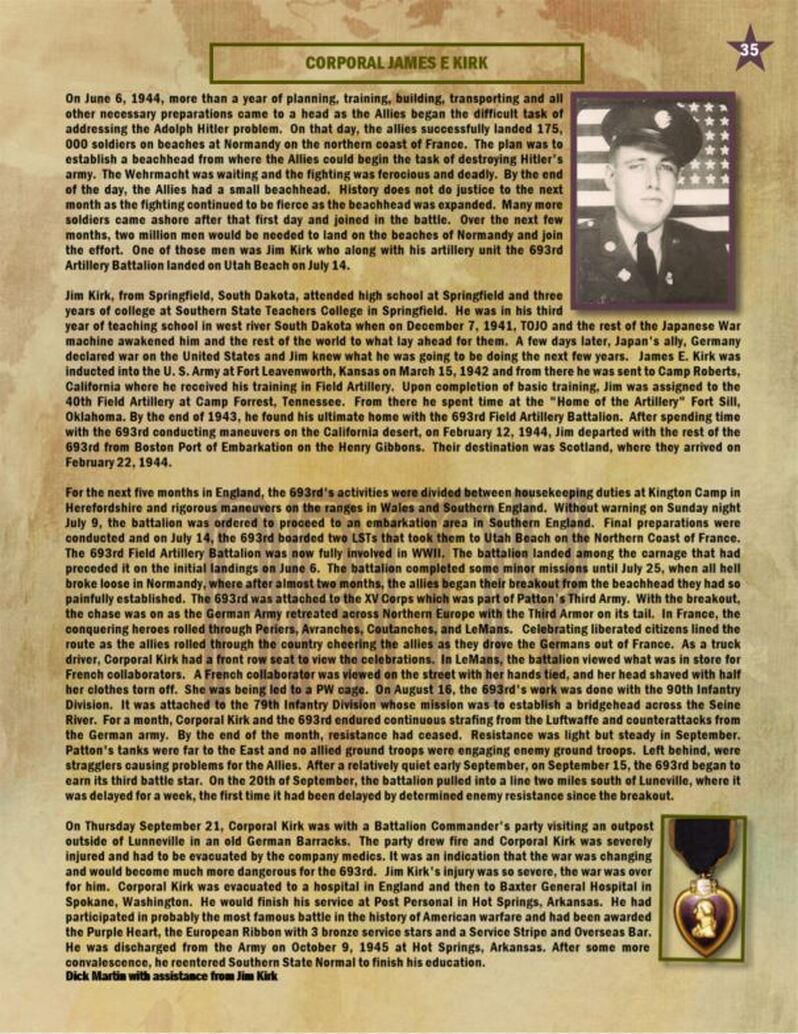 On June 6, 1944, more than a year of planning, training, building, transporting and all other necessary preparations came to a head as the Allies began the difficult task of addressing the Adolph Hitler problem.  On that day, the Allies successfully landed 175,000 soldiers on beaches at Normandy on the northern coast of France.  The plan was to establish a beachhead from where the Allies could begin the task of destroying Hitler’s army.  The Wehrmacht was waiting and the fighting was ferocious and deadly.  By the end of the day, the Allies had a small beachhead.  History does not do justice to the next month as the fighting continued to be fierce as the beachhead was expanded.  Many more soldiers came ashore after that first day and joined in the battle.  Over the next few months, two million men would be needed to land on the beaches of Normandy and join the effort.  One of those men was Jim Kirk who along with his artillery unit, the 693rd Artillery Battalion, landed on Utah Beach on July 14.

Jim Kirk, from Springfield, South Dakota, attended high school at Springfield and three years of college at Southern State Teachers College in Springfield.  He was in his third year of teaching school in west river South Dakota when on December 7, 1941, TOJO and the rest of the Japanese War machine awakened him and the rest of the world to what lay ahead for them.  A few days later, Japan’s ally Germany declared war on the United States and Jim knew what he was going to be doing the next few years.

James E. Kirk was inducted into the U. S. Army at Fort Leavenworth, Kansas on March 15, 1942 and from there he was sent to Camp Roberts California where he received his training in Field Artillery.  Upon completion of basic training, Jim was assigned to the 40th Field Artillery at Camp Forrest, Tennessee.  From there he spent time at the “Home of the Artillery” Fort Sill, Oklahoma. By the end of 1943, he found his ultimate home with the 693rd Field Artillery Battalion.  After spending time with the 693rd conducting maneuvers on the California desert, on February 12, 1944, Jim departed with the rest of the 693rd from Boston Port of Embarkation on the Henry Gibbons.  Their destination was Scotland, where they arrived on February 22, 1944.

For the next five months in England, the 693rd’s activities were divided between housekeeping duties at Kington Camp in Herefordshire and rigorous maneuvers on the ranges in Wales and Southern England.  Without warning on Sunday night July 9, the battalion was ordered to proceed to an embarkation area in Southern England.  Final preparations were conducted and on July 14, the 693rd boarded two LSTs that took them to Utah Beach on the Northern Coast of France.  The 693rd Field Artillery Battalion was now fully involved in WWII.  The battalion landed among the carnage that had preceded it on the initial landings on June 6.  The battalion completed some minor missions until July 25, when all hell broke loose in Normandy when, after almost two months, the allies began their breakout from the beachhead they had so painfully established.  The 693rd was attached to the XV Corps which was part of Patton’s Third Army.  With the breakout, the chase was on as the German Army retreated across Northern Europe with the Third Armor on its tail.  In France, the conquering heroes rolled through Periers, Avranches, Coutanches, and Le Mans.   Celebrating liberated citizens lined the route as the allies rolled through the country cheering the allies as they drove the Germans out of France.  As a truck driver, Corporal Kirk had a front row seat to view the celebrations.  In Le Mans, the battalion viewed what was in store for French collaborators.   A French collaborator was viewed on the street with her hands tied, and her head shaved with half her clothes torn off.  She was being led to a PW cage.

On August 16, the 693rd’s work was done with the 90th Infantry Division.  It was attached to the 79th Infantry Division whose mission was to establish a bridgehead across the Seine River.  For a month, Corporal Kirk and the 693rd endured continuous strafing from the Luftwaffe and counterattacks from the German army.  By the end of the month, resistance had ceased.  Resistance was light but steady in September.  Patton’s tanks were far to the East and no allied ground troops were engaging enemy ground troops.  Left behind were stragglers causing problems for the Allies.

After a relatively quiet early September, on September 15, the 693rd began to earn its third battle star.  On the 20th of September, the battalion pulled into a line two miles south of Luneville, where it was delayed for a week, the first time it had been delayed by determined enemy resistance since the breakout.

On Thursday September 21, Corporal Kirk was with a Battalion Commander’s party visiting an outpost outside of Lunneville in an old German Barracks.  The party drew fire and Corporal Kirk was severely injured and had to be evacuated by the company medics. It was an indication that the war was changing and would become much more dangerous for the 693rd.   Jim Kirk’s injury was so severe, the war was over for him.

Corporal Kirk was evacuated to a hospital in England and then to Baxter General Hospital in Spokane, Washington.  He would finish his service at Post Personal in Hot Springs, Arkansas.  He had participated in probably the most famous battle in the history of American warfare and had been awarded the Purple Heart, the European Ribbon with 3 bronze service stars and a Service Stripe and Overseas Bar.  He was discharged from the Army on October 9, 1945 at Hot Springs, Arkansas. After some more convalescence, he reentered Southern State Normal to finish his education.