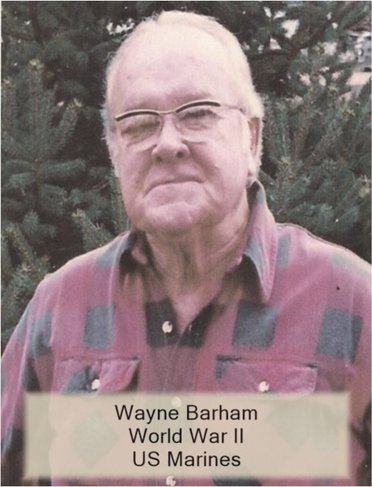 As a young boy, growing up during the Great Depression in Champaign, Illinois, Wayne Barham could not have imagined that the course of his adult life would be set a decade later by a promise made to a dying buddy upon the battlefield in a far off Pacific island called Guam.   Wayne was attending high school in Champaign and had not even heard of Pearl Harbor until America formally declared war on the Empire of Japan following Japan’s sneak attack on American naval and air forces stationed at Pearl.   What many people do not know is that on “the day that will live in infamy”, and the days shortly after, the Japanese also attacked American military bases on the islands of Wake, Guam, and the Philippine Islands resulting in the eventual capture and occupation of these and other strategically valuable islands.  On Wayne’s 18th birthday he went to a movie called Wake Island.  Shaking with rage and fired by patriotism he decided to enlist in the U.S. Marine Corps.  He was inducted in Chicago in August 1942.  For the rest of the War, it would become the primary mission of the U.S. Marine Corps to defeat and reoccupy all the territory seized by the Japanese, push them back to their home islands, and destroy their military capacity.

Wayne acquired his basic training at Camp Elliot, a Marine boot camp in San Diego, California.  His small arms training included the B.A.R. (Browning automatic rifle) and 50 caliber machine gun.  Wayne knew then that being a squads B.A.R. man meant he would likely be on point in combat.   Following basic training, he was assigned to Company K, Third Battalion, Ninth Marine Regiment, Third Marine Division.  The Ninth Marines, together with the balance of Third Division, were sent to the South Pacific Theater of Operations.  Wayne and Company K left the U.S. on December 4, 1943.   It was during basic training that Wayne met his best friend and comrade, a boy from Springfield, S.D., by the name of Jack Rich.

In January 1944, the Ninth Marines were sent to Guadalcanal following two months of combat on Bougainville.  The Ninth remained on Guadalcanal until the morning of June 2 when Wayne, Jack, and the other Marines in Company K were loaded aboard troop transports and sailed to Kwajalein in preparation for the invasion of Guam.  The convoy arrived on June 10 and Company K was boarded on LSTs (Landing Ship Tank) to proceed to Guam together with a great armada, Task Force 53. The Task Force included major battleships and aircraft carriers that loomed far above the LSTs.  It was reassuring to Wayne, that although now silent, these great warships, bristling with firepower and spoiling for a fight, were on his side.

Because of an anticipated naval battle at the time of the Saipan invasion, the Guam campaign was delayed and the Ninth Marines became a floating reserve for Saipan.  Wayne and the Ninth Marines aboard the LSTs, where then separated from Task Force 53, and sent back to the Marshalls. It was at that time that the small convoy of LSTs and LCIs was attacked by four Japanese torpedo bombers.  All four planes were quickly shot down into the sea although one of the LCIs was hit during the brief encounter.  The entire bow of the LCI exploded and the forward gun crew, firing at the Japanese planes, disappeared.   Wayne and the other Marines were topside watching the action unfold.  They cheered, as if at a football game, each time one of the enemy planes was shot down.   The LST convoy proceeded without further incident and put in at Eniwetok where they remained for 27 days afloat the LSTs and growing impatient.   Eniwetok Atoll, whose huge 20-mile-wide lagoon was rapidly becoming a forward naval base, was the major staging station for the Marine, Navy, and Army invasion of Guam.

W-Day for the invasion had been originally set for 3 days following the Saipan assault, presumably June 15.  The actual invasion did not occur until July 23.  Task Force 53 had struck the Japanese airfields and installations in advance of the Ninth Marines advance to the beach in landing craft.  Wayne and Company K were among the first of 20 waves to land.  Upon hitting the beach, Wayne and the other Marines had to cross over 500 yards of open and flat beach. The Marines were raked by Japanese machine gun and small arms fire. Casualties were heavy. Wayne made it to a ridge of dunes but then endured heavy mortar fire from the enemy.  Casualties continued to mount.  A mortar shell landed so close to Wayne that it lifted him off the ground.  He sustained shrapnel wounds in both legs and was evacuated the next morning to a hospital ship.   While Wayne and the other wounded waited to be taken off the beach to the ship, the Japanese started shelling the beach.  Wayne watched as the shells, first hitting off shore, were redirected by the enemy and began coming closer and closer.  A shell hit close by and Wayne was again hit by shrapnel, this time in the back of his head.  He took off his helmet to discover a small hole in the back and a larger out the top.  The fragment had only creased his skull.

Upon medical treatment on the hospital ship, Wayne was released on July 25 and immediately sent back into combat.  His legs were to be freshly bandaged each day.  It was getting dark when the Japanese launched a fierce counterattack which lasted all night.  Some combat was hand-to-hand but the Marines held and it was estimated that the Japanese sustained over 3500 causalities that night.  Company K was in continuous combat for the next several days and was a part of a second landing on Cabra Island just offshore from Guam.  With difficulty, due to Company K’s Cabra Island action, Wayne finally found and rejoined his unit and they were ordered to move north across the island.  The fighting was fierce and brutal. Wayne was often called forward to use his B.A.R. to throw rapid fire into caves where the enemy was hiding.

On August 1, Wayne’s best friend, Jack Rich, lost his life when a Japanese hand grenade exploded between Jack’s legs.  Jack was still conscious as Wayne tried to console him.  Jack had often told Wayne about his home in Springfield, the quiet and friendly town out in South Dakota.  While Jack lie dying in a foxhole with Wayne at his side, Jack asked Wayne to come to Springfield after the War, visit his parents and tell them what happened.  Wayne made and kept the promise to do so, which lead to events that set the course for the remainder of Wayne’s life.

After fourteen days of combat on Guam and wounded twice already, Wayne was permanently taken out of action on August 3rd, when a Japanese hand grenade exploded in his face.  His war ended in that moment.  A corpsman located him and both crawled out of the line of fire.   Wayne was taken out to a hospital ship and subsequently to a hospital on Russell Island. He was totally blind and told how “lucky” he was to still be alive.  Wayne was sent to another hospital on Guadalcanal where doctors told him that it might be possible to operate on his left eye and restore limited vision.  He could never see again from his right eye. Wayne was then loaded on a plane and sent back to the States.  This was his first plane ride but he could not see to enjoy it. The plane touched down in the U.S.A. and Wayne was sent to the hospital at Mare Island, California.  The Philadelphia Naval Hospital was his final home in the Marine Corps.  The surgery to his left eye was performed there in October and resulted in limited vision allowing Wayne to see, with significant magnification correction, by new glasses.

It was mid-December when the doctors sent Wayne home on his first ten-day leave in over two years. Wayne returned to Champaign for a long overdue visit with his family and friends.  The local newspaper reporters greeted him as a twenty-year-old Marine hero.  Wayne says he was never a hero…more of a survivor.   Wayne Barham was discharged from the U.S. Marine Corps in December 1944.  He was awarded assorted medals and ribbons including three Purple Hearts.

Fulfilling his promise to Jack Rich, Wayne came out to Springfield, met Jack’s parents and confirmed that the town was everything and more that Jack had described.    Wayne took a liking to Springfield and decided to continue his education at Southern State College.  He later relocated his family to Springfield, taught school at Springfield High and then at Southern.  Wayne was an educator in Springfield for over 30 years where he was greatly admired by all the students he touched.  Wayne now resides at the Sioux Falls Veterans Home.