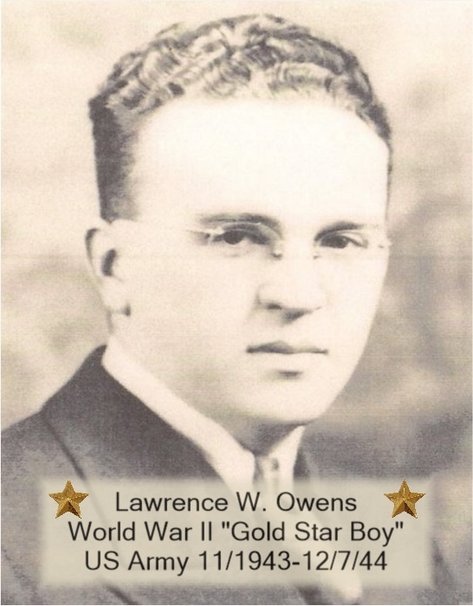 Lawrence Owens, the son of William and Virginia Owens, was born in Springfield, S.D., on January 5, 1912.  Lawrence  was still a small boy when, on April 6, 1917, America officially declared war on Germany and entered  World War I on the side of the Allies: Great Britain, France, and Russia.  On November 11, 1918, fighting in World War I came to an end following the signing of an armistice between the Allies and Germany that called for a ceasefire effective at 11 a.m.– forever known as the “11th hour of the 11th day of the 11th month.”

The Treaty of Versailles, signed on June 18, 1919, specified the terms of peace for WW I, and as Owens grew to manhood, it was the common belief of most Americans that the treaty assured that the First World War was “the war to end all wars”.    In fact, the Treaty of Versailles was largely negotiated between the Allies with little participation from Germany, sowing the seeds that only twenty years later, would erupt into another world conflict, a war even more terrible and tragic than the Great War, a war in which Owens and almost 20 million American men and women would be called to arms and a war where far too many, like Lawrence Owens, would never return.

Lawrence attended grade school and high school in Springfield.  He was an outstanding athlete at Springfield High.  Lawrence was known as a splendid young man, thorough student and star athlete.  He lettered three years in football and basketball.  He continued his education attending Southern Normal for three years and completed his college degree at Augustana College in Sioux Falls, S.D., graduating in the class of 1935.  Owens then taught school in Freeman, Wagner, Elk Point and Menno.   Just prior to his induction into the U.S. Army on November 18, 1943, he was high school principal in Sioux Center, IA.

Following his basic training at Fort Bragg, Owens was assigned to Company B, 1st Battalion, 399th Infantry Regiment, 100th Division (the Century Division),  in the Sixth Army Group.     Owens, together with the 399th Regiment and other elements of the Century Division, left Manhattan early in October, 1944, and arrived  at the harbor in Marseille, France on October 20.  The convoy, first to make a landing at France’s largest seaport since the area had been liberated, arrived directly from the United States.  The 100th, like other units, left home with equipment packed and loaded so it could not be removed immediately from the ships and put to front line use. Normally, the program called for a lay-over near the port during which cargo vessels would be unloaded, equipment issued, and other equipment unpacked.  This procedure was abruptly changed when Sixth Army Group ordered one combat team to be ready to go into the line by November 1.  Seventh Army and its three infantry divisions — the 3rd, 36th and 45th — had made the initial landings in Southern France in August and were exhausted after racing the Germans all the way up to Belfort from Normandy.   G.I.s, who had slogged all the way from the Riviera to the Vosges Mountains, needed a rest. However, the 100th Division, first reinforcement to appear for the Army, was on the continent and was needed badly at the front.  It was a tough order to fill.  Maj. Gen. Withers A. Burress, Richmond, Va., who had commanded the Century Division since its activation, had to take quick steps to get his own green troops equipped and ready to move. Large quantities of material had yet to arrive in the harbor and more was waiting to be unloaded from ships already at anchor. The rush job was accomplished by October 29, and the first combat team, the 399th,  went into the  line, relieving the 179th Infantry, 45th Division, veterans of Sicily, Italy, Anzio and Southern France.  It had been a fast trip — as fast a transition as any outfit ever made from boat to combat.   Part of the division still was in Marseille when Owens and the 399th went into the line near St. Remy on November 1.    Less than a week after the division took over its own sector, the 100th became the first American unit to crack the German winter defensive line in the area near Raon-l’Etape.   In two weeks, the Century had contributed to the complete breaching of the “impregnable” Vosges Mountains.  The Century Division may have been green when it first hit the cold, muddy, densely wooded heights of the Vosges Mountains, but Veterans were made overnight in the fighting and  Private Owens,  with the 399th Regiment, was continuously on the front during this action.

With the Vosges campaign over by November 26, except for mopping up, and with American forces ready to spill out onto the Alsatian Plain, the 100th was ordered north to the toughest part of the XV Corps sector. The entire division hit the line again on December 3 with one of the toughest missions any division had been assigned.  Relieving the 44th Infantry Division of part of its sector, the 100th was to drive northeast and breach the Maginot Line near Bitche, the heart of the entire fortifications system.  It was during the Battle for Bitche, on December 7, 1944, that Private Lawrence W. Owens was K.I.A.   Owens gave his life for his country.  His wife and her parents were living in Menno, S.D.  where Owens was remembered at his memorial  service as a great soldier and good man who sacrificed his life for the United States.