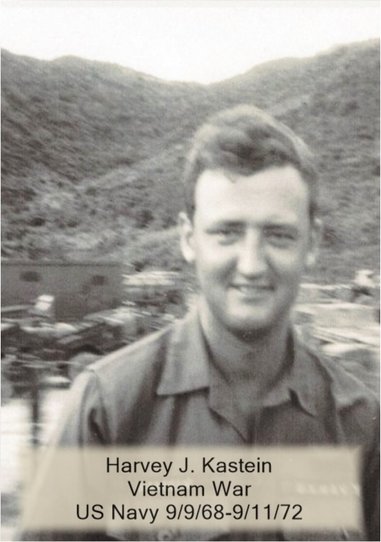 In the mid 1960’s, high school aged baby boomers began to hear of strife in a far-off land that many had never heard of before.  As the months went by, the conflict became more graphic and public. High school aged males began to realize what was facing them when they graduated from high school.  The selective service system, at the time, was made up of a myriad of exemptions.  The exemptions were well meaning but affected the decision making of most males graduating from high school.  The system of exemptions proved to be unfair.  If a male graduate was on the verge of marriage or entering college, the system exempted him from service.  If neither one of those fit the graduates situation in life at that time, he was deemed to be eligible for service.  In 1967, Harvey J. Kastein, finished high school in Springfield, South Dakota with neither of those exemptions at his disposal.

After finishing high school in Springfield, South Dakota in 1967 and the Vietnam War looming ever larger, Harvey relocated to Wisconsin to work with a bricklayer, knowing he would probably be hearing from the selective service.  He did not intend to attend college or marry so he knew there was some military for him in the future.  After receiving various paperwork from the draft board, he decided to enter the Navy.  He and a friend, Terry Gretchman, decided to enlist in a 120-day delay “buddy program,” that allowed for a 120-day delay until they entered the Navy and some assurances thereafter that they would serve together.

In December of 1968 Harvey and Terry reported to San Diego for nine weeks of basic training.  At the end of basic training, Harvey was assigned to the USS Collett DD 730, a WWII  era Allen M Summer  class destroyer stationed at Long Beach, California, which was part of the USS Coral Sea task force of the Seventh Fleet.  Harvey and Terry never saw each other again during their days in the service.

Harvey first deployment had an auspicious beginning as the ship navigated its way straight through a typhoon on its way to Japan.  It was a harrowing experience for a young adventurer from the prairies of South Dakota.  The deployment was to last from September 23, 1969 until March 23, 1970 and consist mostly of training exercises until February 10, 1970.  On that date, the Collett became part of the  Naval Gunfire Support team along the coast of Vietnam, providing supporting fire for friendly forces inland involved in operation “Dung Son 3/70” twenty miles south of Da Nang.

At the conclusion of his first deployment Harvey volunteered for Vietnam in-country duty.  To prepare for the one year Vietnam in-country, Harvey received survival, language and arms training in Coronado, California.  Upon arrival in Vietnam, Harvey was assigned to Tien Sha where he was part of harbor security at Danang.  He worked on patrol boats inspecting shipping in and out of the harbor.  After six months, life became more dangerous when Harvey was transferred to the Mekong Delta, a severely impoverish area 35 miles Southwest of Saigon.  From Dong Tam he would be part of a crew on a heavily armed kind of swamp boat that would provide fire support, supplies and other necessities to the area forces.  During this time, Harvey was wounded in a mortar attack on his base camp.  His wounds did not require evacuation so he resumed his tour only to later be felled by an unexpected collapsed lung that did require his evacuation.

After being rehabilitated at ZAMA Army Hospital in Japan and Great Lakes Naval Hospital in Chicago, Harvey found himself back in Long Beach and assigned to the USS Gridley DLG 21, a Leahy-class guided missile cruiser.  The ship was headed for the waters off Vietnam, a place Harvey was getting very familiar with.   He spent the rest of his time in the Navy on the Gridley involved in training exercises with periodic naval gunfire support for the land forces operating in Vietnam.

Harvey returned to the United States after having spent three Vietnam tours (two at sea and one in-country) and 1,266 days at sea or on foreign lands of his 1368 days active service, or 92.5% of his time in the Navy spent away from the USA.  He, along with fellow soldiers, were greeted at home by indifference and in some cases verbal assaults.  Still, a man from the prairie had just had the opportunity to serve his country by spending almost four years in the Navy involved in a major international conflict.  Along the way, he experienced the fraternity among fellow soldiers in a war zone and cultures and people unknown to him back in Southeastern South Dakota.  He was awarded the National Defense Medal, the Vietnam Service Medal with one silver and 1 bronze star, the Republic of Vietnam Campaign Medal with device and the Armed Forces Expeditionary Medal.

On September 11, 1972, Harvey Jay Kastein was discharged from the Navy as a Technician 3rd Class.  He returned to Springfield where he raised a family and spent most of his working life as a mail truck driver.