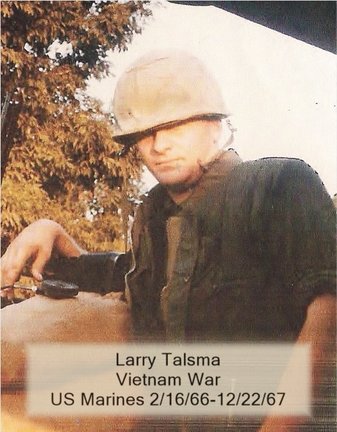 March 8, 1965 (as only the Marines knew how) the first wave of assault troops in eleven Marine amphibian tractors (LCVPs) touched down at RED Beach 2, just North of Da Nang, Vietnam - the first unit-sized American force to enter Vietnam.  Fortunately, the day would be reminiscent of MacArthur’s World War II Landings at Leyte and Lingayen beaches in the Philippine Islands and not the day the marines had at Iwo Jima.  Vietnam would be divided into four Corps Tactical Zones called Military Regions.  The Marines would be assigned to I (pronounced “eye”) Corp.  This military region (adjacent to North Vietnam) would prove to be the most dangerous and suffer the most casualties for America during the Vietnam conflict.

At this time, back in southeastern South Dakota, Larry Talsma was finishing high school and preparing to take over running the family ranch.  Little did he know that Uncle Sam was going to require him to take a two-year timeout and spend some time in a faraway land very different from his familiar ranch country in South Dakota.   At the time that Larry finished high school, males either married, went to college, or went to Vietnam.  For Larry, there were no prospects for marriage at this time and the family ranch was waiting for him instead of college, so he prepared to answer the call as a draftee in the army.

At the induction center in Sioux Falls on February 16, 1966, the room was full of army draftees ready to be inducted into the United States Army.  Before they could proceed, the officer in charge informed the group that two volunteers were needed for the Marines.   There were no volunteers, so Larry was volunteered by the officer in charge.  Larry had had premonitions of being in the Marines and being aware of the pride, esprit de corps, and reputation of the Marines, he was content with being one of those picked.

Larry took six weeks of basic training at Camp Pendleton, California, where he especially remembers all the hand to hand combat training that the new marines received.  In one especially physical session, Larry found himself on his behind.  When he got up, he looked down and was stunned to see that he had dislocated his leg at the knee.  He made some adjustments, his leg popped back into place, and in true Marine fashion finished the session and went on to finish basic training.

After basic training, Larry went to Camp La Jejune, North Carolina, to get advanced training as a fuel analyst.  In his training, he worked with transporting large amounts of fuel from ships to shore installations and other similar transfers.  After finishing at Camp La Jejune, Larry went back home for a month’s leave before heading for Vietnam where he never saw a fuel transport line or did any work with fuel again.

Larry arrived in Da Nang to rendezvous with the First Marine Division in the I Corps Military Region.  With no artillery training, Larry was surprised to be assigned to the Headquarters Battery of the 11th Marine Regiment, the division’s artillery regiment.  The regiment was tasked with the job of providing artillery support for the division’s infantry units and for protecting Da Nang.  The different 11th Marine batteries were spread out around Da Nang and the I Corps area.  Headquarter’s Battery was the nerve center of the regiment and required constant contact with the spread-out batteries.  Larry spent most of his time with the motor pool providing transportation (two and a half ton trucks) to ferry supplies and troops back and forth between the batteries.  On many occasions, he found himself in potentially tenuous situations at night on remote roads by himself with no security.  When Larry wasn’t driving, he was doing maintenance keeping the trucks running in the adverse weather and road conditions.

In leaving home after his pre-Vietnam leave, Larry did not think he would see anyone he knew for the next year.  However, on one of his trips ferrying troops in the I corps area, his truck slowly passed a marine patrol on a road out of An Hoa.  Larry was surprised by a bearded marine suddenly on the running board of his truck.  It was Dan Mejstrik, a friend from his home town in South Dakota.  They managed a short reunion until Larry’s truck passed Dan’s patrol.  The chance meeting had been a great break for both of them before they went back to the task at hand and never saw each other again in Vietnam.

Near the end of his tour in Vietnam, Larry was transferred to the Military Police Company of Headquarters Battalion of the First Marine Division to help run a POW camp.  Running a camp holding enemy prisoners being interrogated by US agents was very different from his duties in the Headquarters Battery of the artillery regiment.  His experiences would stay with him, but would be his last, because the POW camp was his last assignment in Vietnam.  He returned home just before Christmas of 1967.
Corporal Larry Talsma was awarded the National Defense Service Medal, the Vietnam Service Medal and the Vietnam Campaign Medal.   On December 22, 1967, Larry was discharged from the Marines at Santa Anna, California.  He returned to Springfield to pick up his life where he had left off and spent the rest of his life quietly as a family man and rancher.