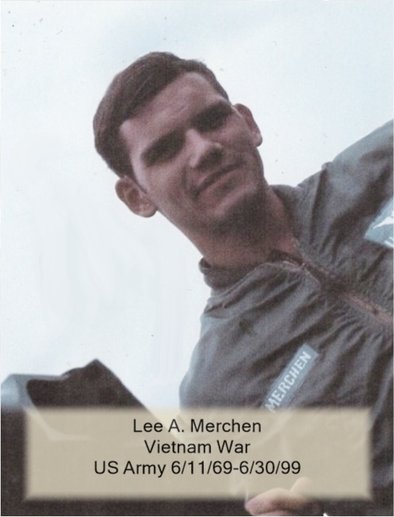 Mobility!!!  Each new war sees big advances in mobility.  From horses to internal combustion powered vehicles to primitive airplanes and tanks to jet engine airplanes to helicopters, the combatant that takes earliest and fullest advantage of the advances in mobility gains a huge advantage in a new war.  In WWII, it was Germany and the blitzkrieg.  In Vietnam, it was the US and the helicopter.  The helicopter became probably the most significant weapon in the US arsenal and dictated much of the US tactics in Vietnam.  To operate the machine effectively, a huge supply of qualified men were needed to train.

One of those qualified men was Lee Merchen in Springfield, South Dakota; although Lee had no inkling that piloting a helicopter was in his future when in 1969 he was notified he would be drafted.  He had been in college for a year and held various jobs and knew the draft board would eventually catch up with him. When it did, he took his basic at Fort Leonard Wood, Missouri where his training officer talked him into going to OCS.  He completed AIT at Fort Lewis Washington before completing OCS at Fort Sill, Oklahoma, the home of the artillery, where he was commissioned a 2nd Lieutenant in the Artillery.

Lee had the flying bug at an early age.  With the resources he had, he was able to do some flight training in Wagner and soloed in a Cessna 150, but wasn’t able to get a Private Pilot’s License..  He had his eyes on the “High School to Flight School” program leading to becoming a warrant officer aviator in the army, but discovered in his physical that his vision was not 20/20.  During his OCS training, two of his classmates made him aware that 20/20 vision was not a requirement or prior flying experience), so Lee was able to switch directions and pursue his flying passion at flight school .
The first phase of Lee’s flight training was the initial training in TH55s and instrument training in TH13s at Ft. Wolters, Texas. He was successful with that training so he continued on to phase 2 at Ft. Rucker, Alabama, where he was trained in UH-1s and advanced aircraft.

Upon completion of his training, Lee was sent to Vietnam, where, flying the maximum allowed 110 hours a month, he joined A 227th of the 1st Cavalry at Pleiku which was soon redesignated the 3rd Assault Helicopter Company in support of MACV advisors in a mix of missions transporting different advisors to different places hauling supplies, locals, and the dead and injured.

Lee’s tour in Vietnam coincided with the drawdown of strength in Vietnam, resulting in Lee getting caught in the chaos of the military’s downsizing while trying to meet its needs with a smaller force.  As a result, after eight months of flying, Lee got assigned as a forward observer for C Battery, 3rd Battalion of the 82nd Field Artillery.  Having been trained in artillery at Fort Sill, it was a dramatic change from being a helicopter pilot, and the change tested Lee’s adaptability.

Upon his return from Vietnam, Lee continued with what would become a 30 year career in the military.   Thanks in part to his unusual assignment to an artillery unit at the end of his Vietnam tour, Lee survived the massive reduction in the military force (rif) from the Vietnam buildup and began a long career of a mix of schools, helicopter flying, artillery, and nonrelated assignments.

Intermixed among all of these assignments, in 1990, Lee was assigned the brigade executive officer of the newly formed 128th Aviation Brigade in Panama.  Lee arrived after operation “Just Cause.” which was the US operation to depose dictator Manual Noriega.  It was a tough two years that saw a battalion commander and two others killed when their UH1 was shot down by insurgent fire in El Salvador and two other accidents that took the lives of more.

On June 30, 1999, Lee was discharged from the army after a somewhat rare career of  30 years.  He also obtained the rank of Colonel (06) which reflects extraordinary success, accomplishments and value to the army.  During the thirty years Lee had a wide variety of assignments taking him all over the world ending in assignments with great demands and responsibilities.  He was awarded a chest full of medals including some of the most prestigious.  In addition to two Legion of Merit Medals and the Bronze Star Medal, Lee was awarded three Meritorious Service Medals, eleven Air Medals, The Army Commendation Medal, The Achievement medal and the Good Conduct medal.  He also received two National Defense Service Medals, the Army Service Ribbon, two Overseas Service Ribbons, Republic of Vietnam Campaign Medal and Vietnam Gallantry Cross Unit Citation with Bronze Star, Master Army Aviator Badge, and Air Assault Badge.  The best way to end a biography of Colonel Lee Merchen’s  thirty years and 19 days in the United States Army is to quote passages from his last Legion of Merit awarded to him on September 30, 1999, a couple of months after his discharge:

“Throughout your career you served in positions of increased responsibility…You set the standard and earned the highest admiration, respect, and loyalty…Your exemplary professionalism and patriotism  ...”

In 2000, shortly after his discharge, Lee visited the New Tribes Mission Aviation training and support facility in McNeal, Arizona where he currently works as a volunteer.
Dick Martin and Lee Merchen