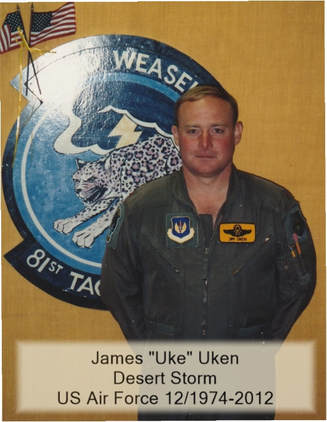 Jim Uken, nicknamed “Uke“ in one of his earlier assignments, was commissioned a 2nd Lieutenant, USAF, in December of 1974 through the AFROTC Program at South Dakota State University.  He then reported to Mather AFB, Sacramento, CA, for flight training where he earned his Navigator wings and subsequently completed a specialized school for training Electronic Warfare Officers.

While the U.S. has established and maintained a veritable dominance in the realm of air superiority since the Vietnam era, by no means has the threat to U.S. assets diminished. Few countries around the world have the ability to match the U.S. and its vastly capable forces in strictly air-to-air combat, but there remains a credible threat from the ground in the form of the Integrated Air Defense Systems, or IADS. While the last U.S. air-to-air combat loss was a sole F-18 Hornet during Desert Storm, many more losses have occurred due to surface-to-air missile systems (SAMs) and radar guided anti-aircraft artillery (AAA). The ground-based threat to aircraft is becoming increasingly relevant to modern air combat, especially given the advances in technology and the enemies cost effectiveness of employing IADS systems. (See Appendix)

By now a seasoned Major,  Uke was ready the morning of 17 January 1991 when, flying with his squadron commander, they led the first four ships of attack aircraft to penetrate Kuwaiti airspace ahead of the coalitions 2000 aircraft attacking  Iraqi targets in Kuwait and Iraq. The first Gulf War ended on February 28, 1991 with Major Uken and the rest of the Wild Weasel Crews credited with destroying more than 250 enemy SAM sites.

Lt Col Uken’s last flying assignment was as Commander of the 561st Fighter Sq. “Black Knights”, Nellis AFB, NV. After promotion to Colonel and his flying days now over, Uke had amassed almost 4000 fighter hours with 2668 of these hours in the F-4G Wild Weasel, 141 combat missions, and 447 combat hours. He was selected to attend the senior officer Air War College (1997) and spent the rest of his career in staff jobs at NATO and as Director of the Goldwater Range complex in Arizona. Nearing mandatory retirement in 2004, he gladly accepted the Wing Commander’s request he maintain the same position as a Civil Servant which he did until full retirement in 2012.

By Dick Martin and Jim “Uke” Uken
History of the Wild Weasle Program
In March of 1965, an aerial interdiction campaign against ground targets in North Vietnam – Operation Rolling Thunder – got underway. In response, the North Vietnamese began strengthening their air defenses, but not without help. In May 1965, reconnaissance flights over North Vietnam revealed the first surface-to-air (SAM) sites.  U.S. military strategists quickly took notice when on July 24, 1965, the new technology shot down a USAF F-4C Phantom II. It was the beginning of a chilling twist in air warfare; even the very next day, an SA-2 brought down an American reconnaissance drone flying at 59,000 feet. The game had irrevocably changed.

Retaliatory strikes were directed at offending SAM sites, but were met with failure as the North Vietnamese often substituted fake missiles and used dummy sites as a ploy. The losses continued to mount as the threat of the radar-guided missiles forced strikers down to low altitudes within the effective range of the dense enemy anti-aircraft artillery.

In October 1965, a group of ten specially-selected United States Air Force aviators were gathered at a remote part of Eglin Air Force Base in the Florida panhandle. This highly-classified operation, called Project Weasel, was designed to develop new equipment and tactics to counter the SAM threat over Vietnam.  As a result, installed in their North American F-100F Super Sabre aircraft were radar homing and warning receivers designed to locate the signal emitted by the SAM radar operators. The aircraft also featured SAM launch detectors, which would notify the crew if a missile had been launched.  Within a month, aircraft were deployed in complete secrecy to Korat Royal Thai Air Base, arriving in theater Thanksgiving Day of 1965.  The deadly cat-and-mouse game between the “Wild Weasels” and the North Vietnamese air defenses had started, beginning with flights near the border region of Vietnam and Laos, scoring the first kill on a SAM site in history during a mission on December 22.  A later effort was made to shift the objective from suppression to the outright Destruction of Enemy Air.  The Weasels would again purposely entice the SAM operators to shoot at them, and once the emitting signal was initially found and fixed by the F-100s, it was subsequently finished by the F-105s.

By the end of Vietnam, the Wild Weasels had lost dozens of aircraft and forty-two aircrew had been killed, declared missing, or became Prisoners Of War (POWs). It is estimated the group destroyed (or helped to destroy) over 40 SAM sites; however, the threat of Weasels prowling the airspace caused untold numbers of SAM operators to shut down their radars, allowing U.S. aircraft to operate in an environment relatively sanitized from ground-based threats.  Over the next 15 years the Wild Weasel mission and aircraft were updated to counter the evolving Warsaw Pact threat.