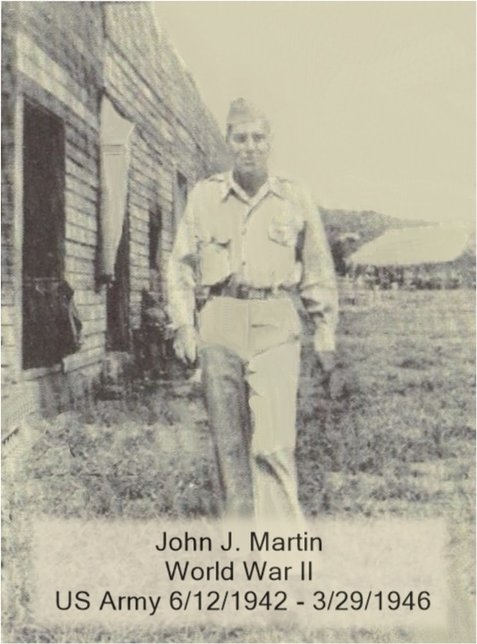 On January 9, 1945, one of the most famous pictures of the war in the Pacific was taken when General Douglas MacArthur fulfilled his promise of returning to the Philippine Islands by wading ashore as part of the landing on the beaches at Lingayen Gulf.  A few months previously, he had provided the same photo-op when he landed at Leyte Gulf.  Part of the force landing that day at Lingayen Gulf was the 160th Infantry Regiment, the unit containing Lt. John (Jack) Martin of Springfield, South Dakota.  To liberate the Philippine Islands, the 160th was about to start 125 days of sustained combat against the empire of Japan.  Lt. Martin would be awarded the Silver Star and two Bronze Stars for valor, the Purple Heart for wounds, Asiatic Pacific Service Medal, World War II Victory Medal and the Combat Infantry Badge.  During that time, the 160th Infantry Regiment paid a heavy price in casualties but inflicted a devastating toll on the Japanese force.

John “Jack” Martin was enjoying a teaching and coaching job at Tyndall, South Dakota when he, like so many others, answered the call from his country.  After Officer’s Candidate school at Fort Benning, Georgia and various other military schools, on May 17, 1943, Jack found himself joining the 160th Infantry Regiment in Hawaii which was involved in intensive amphibious, jungle, and ranger training.

On December 24, 1943, Jack and the rest of the 160th Infantry Regiment sailed for Guadalcanal where it spent four months protecting the island and airstrip against further attack from the Japanese and mopping-up what was left of the enemy.  On May 1, 1944, Jack’s regiment made an amphibious landing at Borgen Bay, near Camp Gloucester, New Britain, which brought them near the Japanese stronghold of Rabaul.  During its stay at New Britain, the 160th Infantry Regiment underwent more amphibious, jungle, and patrolling training, and invasion plans were prepared for the Lingayon Gulf to liberate the Philippine Islands.  Final rehearsals for the invasion were made at Lae, New Guinea.

On December 31, 1944, First Lieutenant John (Jack) Martin and the 160th Infantry Regiment were underway to the Philippine Islands with the largest amphibious landing force assembled in the Pacific war up to that time,
Facing MacArthur’s force were the confident General Yamashita and 250,000 Japanese soldiers tasked with defending the Island of Luzon.  Yamashita’s plan was a defense in depth, meaning he planned to let MacArthur and his men wade ashore, encircle them, and crush them.

After landing with General MacArthur at Lingayen Gulf in the Philippines on January 9, 1945, the publicity was over and the 160th Infantry Regiment would not be out of danger until June 10.  The regiment, with approximately 3,000 soldiers, immediately spearheaded the 6th Army to Clark Airfield, a major strategic prize that was strongly defended by 10,000 Japanese soldiers in heavily fortified positions.

After 53 days of carrying the bulk of the fighting for the 40th Division on Luzon and killing 3,500 Japanese and losing 1,000 wounded and killed of their own, Lt. Martin and the 160th Infantry were relieved and began preparations for landing on the Philippine Islands of Panay, Guimaras and Negros.   During his time on Luzon, First Lieutenant John J. Martin earned two Bronze Stars for Valor, one of which read:

“For heroic achievement in connection with military operations against the enemy on Luzon, Philippine Islands from 14 January to 3 March 1945.  As executive officer of his company, First Lieutenant Martin not only performed his prescribed duties, but often disregarded enemy fire to assist the forward elements in an attack.  On 29 January 1945 he moved forward of the company command post to organize the evacuation of wounded.  The company was under intense machine gun and mortar fire, but First Lieutenant Martin moved into the impact area with no thought for his own safety.  His devotion to duty and his ability for organization was inspiration to every man in the company.”

On March 18, 1945, the 160th hit the beach of Panay.  Against a superior number of well-prepared Japanese soldiers the 160th moved through the jungle and dug out the enemy and secured the island.  During his time on Panay, First Lieutenant John J Martin earned a Purple Heart for wounds and the Silver Star for valor, which read:

“For gallantry in action near Bucari, Panay, Philippine Islands, on 9 May 1945.  When his company was subjected to a heavy night counterattack by a large number of the enemy, which overran the perimeter and turned one of their machine guns on the company, First Lieutenant Martin, though wounded by a grenade fragment at the beginning of the attack, left the shelter of his foxhole to reorganize his company. Leading a small group of men, he successfully repulsed the enemy, forcing them to withdraw leaving many dead and wounded.  First Lieutenant Martin’s action enabled his company to retain its position, fulfill its mission, and prevent further loss of life of the men under his command.”

Combat for Captain John (Jack) Martin and the 160th Infantry Regiment ended on June 10, 1945.  They had been an integral part of the liberation of the Philippine Islands by taking part in intense combat actions on the islands of Luzon, Panay, and Guimaras.  The regiment had lost 400 KIA and 1100 wounded and had killed over 5,000 enemy Japanese soldiers.

However, Captain Martin and the 160th Infantry Regiment were not finished.  On June 16, 1945, the regiment began its preparation as part of the spearhead for the invasion of Japan.  Instead, President Truman dropped two atomic bombs on Japan and the war was over.

The war having ended, in September and October Jack’s regiment moved into Korea for occupation duty.  On November 8, 1945, Captain John J Martin headed home arriving on December 8, 1945.  Jack was discharged on March 29, 1946 at Fort Leavenworth, Kansas.

Jack returned to his home of Springfield, South Dakota where he raised a family and spent the rest of his life as a teacher, coach, and athletic director at Southern State College in Springfield.  During his military service, he had been awarded the Purple Heart, Bronze Star, Silver Star, Combat Infantry Badge, Asiatic Pacific Service Medal and the World War II Victory Medal.  He remained in the reserves for twenty years and attained the rank of Lieutenant Colonel.

After Jack had passed away, a book was found in his belongings named “Sunburst Saga” by William Ward McCreedy.  It is not a history of the 160th Regiment, but a series of anecdotes occurring during its time in the Philippines.  In the back of the book is listed all the “killed in action” soldiers from the 160th Infantry Regiment.  Next to the names of the KIAs, in Jack’s hand writing, were notes such as “Pinky,” “Komo,” “died,” and finally “right next to me”.