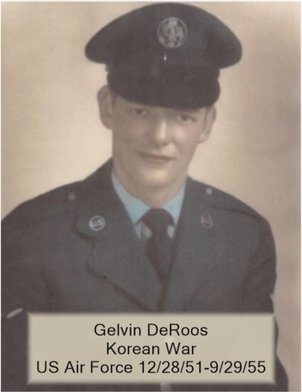 The Korean War, in which the United States was involved, was a conflict between Communist and non-Communist forces in Korea from June 23, 1950 to July 27, 1953.  At that time the Soviet Union and its allies were threatening the rest of the world with Communist ideology and the United States was gearing up and directing its efforts to a strategy of stopping the spread of Communism.  It was into this situation that Gelvin DeRoos entered active duty with the United States Air Force.

Gelvin DeRoos was born in Springfield, South Dakota on April 6, 1930 and moved to Denver, Colorado in 1949.  Before entering the Air Force, he was involved in sales in Denver, Colorado.  He entered the Air Force December 31, 1951.  He took his basic training at Lackland Air Force Base, San Antonio, Texas. Upon completing his training, he was assigned to the 31st Fighter Escort Wing at Turner Air Force Base in Albany, Georgia where he would spend the next three years assigned to the personnel office doing morning reports, payroll and other office duties.

During the Cold War, to prepare for any military incidents with the Soviet Union, the United States spent a tremendous amount of time, energy and money advancing the technology and procedures in all areas of warfare.  Gelvin's 31st Fighter Escort Wing would be involved in “advances” that were necessary in the defense of the United States. The overall goal of one of their missions was the mass movement of the entire Wing from Turner Air Force Base in Albany, Georgia to Misawa Air Base in Japan. In addition, the  mission was to test aerial in-flight refueling over the ocean from Travis Air Force Base in California to Hickman Air Force Base in Hawaii.

On July 4, 1952, Gelvin’s squadron readied itself to move out but did not know their destination was Misawa on the Northern tip of Japan until they boarded the plane.  It was two days before “Execution Day” of the mass movement of the “Wing".  Fifty-eight F-84G pilots flew over in their single engine jets and left on this assignment on “Execution Day”.  As to the other part of the mission, the 31st Fighter Wing pioneered in the development of in-flight refueling. On July 6, 1952, the Wing executed “Operation Fox Peter One.” Fifty-eight jet airplanes received fuel from a fuel tanker through a specially designed probe.  When the refueling exercise from California to Hawaii was completed, the F-84G Fighter Wing island-hopped and refueled across the rest of the Pacific.  Because of the sheer magnitude of moving an entire Wing overseas and doing the refueling task, it was deemed that the 31st Fighter Escort Wing be the recipient of the “first-ever Air Force Outstanding Unit Award” and Gelvin personally received the “Airman of the Six Months” award and shortly thereafter was promoted to Staff Sergeant.

After his discharge from the Air Force in 1955, Gelvin finished his college education at the University of South Dakota.  After teaching business subjects for three years, he spent the rest of his career in the Rural Electric Cooperative program.  He retired in 1992 and now lives in Urbandale, Iowa.