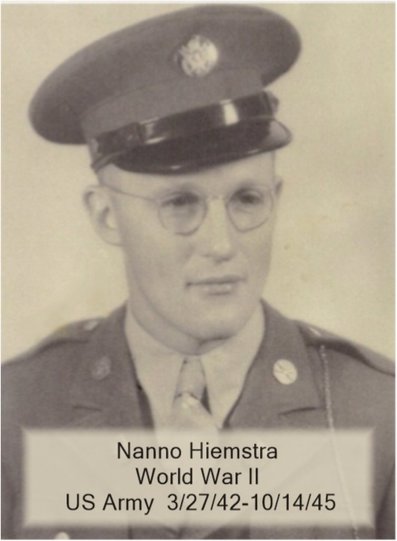 General George S. Patton, a most controversial American military leader, was both praised and cursed by the men that fought for him, but there can be no question that he was successful in the battles in which his troops fought.  One of his most noteworthy leadership positions was with the Third Army in the European theater toward the end of the Second World War.  One of the men that fought under the leadership of General Patton was Sgt. Nanno Hiemstra, originally from Springfield, SD, and drafted into the army in his new home in Wisconsin.  Nanno was part of the highly decorated 90th Infantry Division that was reactivated in 1942 and fought in most of the major battles that brought about the defeat of Nazi Germany in 1945.

Nanno received his basic training at Camp Barkley, Texas.  He received advanced training and became a heavy truck/tractor driver, specifically to pull 105 mm Howitzer guns to their firing positions.  He received additional training in Texas, Louisiana, and California in preparation for being deployed overseas.  In 1944, his unit was shipped to Ft. Dix, NJ and in March they boarded the HMS Ethicon Castle and with limited communications, because of the danger of German U boats, began the slow journey across the ocean to Liverpool, England.

In Europe, additional training and equipment preparations were made in anticipation of the invasion of the coast of France.  Nanno would be part of the largest invasion force ever assembled, driving his M5, Diamond T,  caterpillar pulling a 105 mm Howitzer to major battles across the continent.  He went ashore on Utah Beach on D-Day +2.  Nanno reported: “The landing craft went as far as they could go in the water but once the tractors and Howitzers were unloaded there was still water up to the tractor seats.  The tractors would run under water over five feet because of the waterproofing.  Shells were falling all around us as the Germans were firing at us from guns placed on the cliffs.”

During the six weeks after the invasion, the 90th Division was involved in the most difficult, demanding and bloody battles of the war.  The division worked its way across France, Belgium, Holland, with its final destination being Berlin.  On the way, Nanno was involved with being one of the first American soldiers to cross the Moselle River.  He was one of four drivers that drove his tractor pulling guns, ammunition, food, and medicine across the river and then would return with wounded soldiers on the tractor and trailer.  For his actions in battle, he was later awarded the Bronze Star.

The Battle of the Bulge took the American Army by complete surprise.  In a final desperate attempt to break out of the encircling allied armies, Hitler ordered his elite soldiers to force their way to Antwerp, Belgium to give the Germans access to a port and additional resources to continue fighting the war.  Despite struggling against the constant cold, ice, and snow during December and January, as ordered, General Patton stopped the German offensive with three divisions, one of those being the 90th Division.  In the bitter fighting that ensued and at a great cost to both sides, the allies gradually took control of the battlefield.  In his memoires, Nanno reported, “Finally, when the Germans retreated, we took a lot of prisoners.  One week alone there were 1,500 prisoners just within the 90th Division.  The roads were filled with dead Germans and destroyed equipment.”

With continued fighting, the 90th was tasked with crossing the Rhine River.  A long week of fighting was part of the battle for Frankfurt Germany; but after that, Nanno and the rest of the allied armies were nearing the end of the fighting.  Nanno was present when the 90th made an astounding discovery in Merker’s Salt Mine.   Hidden in the underground salt mine were Germany’s entire gold supply, a great portion of its wealth, and many stolen treasures.

After 332 days in combat, Nanno and the 90th ended up in Czechoslovakia on May 8th, 1945 when the war in Europe was finally over.  Like many other European units, the 90th was held in Europe and anticipated being transferred to the Pacific Theater and the war against Japan.  When the Pacific war was over Nanno was sent back to the states on September 1945.

Awards and medals that Nanno received during his time of service were the Bronze Star for heroism while crossing the Moselle River, the Invasion Arrowhead, and Battle Stars for Normandy, Northern France, Ardennes, Rhineland, Central Europe and the French Croix de Guerre, and the Silver Battle Star.