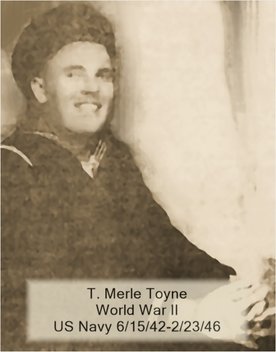 Japan’s Admiral Isoroku Yamamota, Commander-in-Chief of the Japanese Imperial Navy and commander of Japan’s unprovoked attack on Pearl Harbor, actually opposed war against the United States.  He lived in the U.S prior to the war, being a student at Harvard University and naval attaché in Washington DC.  He traveled extensively and was well aware of America’s economic and industrial might. While other Imperial staff celebrated their military success against America at Pearl Harbor, Yamamota lamented. He correctly predicted that Japan’s surprise attack would result only in “awaking the sleeping giant” whose overwhelming resources would eventually be brought to bear against Japan with devastating destruction. So it was when T. Merle Toyne, together with millions of other young American men and women, in the first months following the Pearl Harbor attack, answered the call of duty by flooding military recruiting stations.

Merle enlisted in the U.S. Navy immediately upon graduation from high school. The farm boy from Iowa eventually sailed over most of the world’s oceans serving on six different naval vessels.  He was inducted into the Navy at Des Moines on June 15, 1942 and was first stationed at the Naval Training Station, Great Lakes, Illinois attaining the rank of Seaman First Class.  In August, Merle was assigned to his first ship, the destroyer USS Prairie, at Boston and then New Orleans.

German U-boats inflicted tremendous losses upon allied shipping in the early years of WWII.  Toyne spent the earlier part of the conflict aboard the Prairie.  In April 1943, he was assigned to the mine sweeper USS YMS 165, patrolling and convoying the North Atlantic shipping lanes from the East Coast to Gibraltar.  Toyne additionally served a brief period in South Atlantic waters between Recife, Brazil and Port of Spain Trinidad. By June 1943, he was reassigned for a short while to the destroyer tender/repairship U.S.S. Alcor.  In July, he began a ten month service on the mine sweeper USS J.D. Edwards, primarily securing shipping routes along the African coast.  In May 1944, Toyne was assigned to the destroyer USS Alden, operating out of Norfolk, screening the new Battleship Wisconsin during a phase of that new ship’s shakedown training.

Merle’s time at sea was temporarily suspended in June 1944, when he was sent to the U.S. Naval Training Station in Newport, R.I. where, for the next three months, he received special training in the repair of battle damaged vessels.  In September, he reported for duty on the USS Zaniah, a repair and distilling ship, initially operating in the Panama Canal Zone but soon dispatched for special operations out of Pearl Harbor to the Solomon Islands and later Okinawa.

The summer of 1945 was a warm, busy and bloody experience in the Okinawa theatre.  As combined US forces continued to advance, Japan’s ferocity turned ever more desperate.  During the 3-day battle of Leyte Gulf, the enemy pulled a wildly unexpected move. Kamikaze, which means “divine wind” and refers to the typhoons that twice destroyed Mongol fleets intent on invading Japan in the thirteenth century, were suicide planes filled with high explosives and just enough fuel to reach their targets.  The planes inflicted great destruction upon US Naval vessels by flying the explosive laden planes directly into the ships.  This practice continued until the end of the war.  Merle was aboard the Zaniah at this critical time when damage was at its height and repair facilities and personnel scarce.  Toyne’s ship repair unit repaired 45 battle damaged vessels in floating dry docks, returning them to the line of duty.  Kamikaze attacks on American vessels at anchor or moored to the dock were frequent.  Although Zaniah was never directly attacked during her sojourn off Okinawa, two sister ships were struck nearby.  The Zaniah performed repair and water distillation services till the end of the war.  Merle’s responsibilities increased during this period and he was promoted to the rank of Yeoman Third Class.

Following Japan’s surrender, Merle was honorably discharged from active duty on February 23, 1946.  He continued to serve inactively till March 1, 1950.  He then attended college at Iowa State and earned his Bachelor degree from the University of Missouri.  After being a teacher for some years he relocated to farm in the Springfield area.