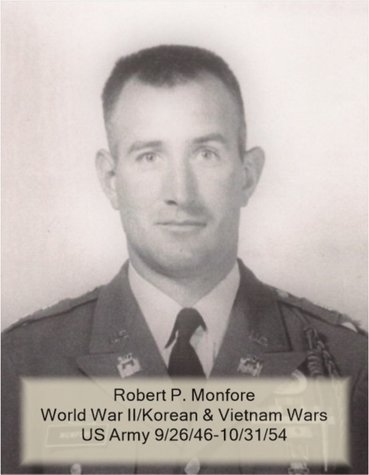 After the most devastating war in history, the mood in America in 1946 consisted of relief, exhaustion, and belief that the United States was in for a period without war.  Even before WWII was over, however, the intrigue began as the victors began jockeying to claim the spoils of war. Despite being adamantly opposed to recolonizing, the United States gave in and allowed France back into Vietnam.  Likewise, the Soviet Union gained a position at the peace table by joining the war effort just before Japan surrendered.  Allowing these two blunders to occur would come back to bite the United States in a very big way.

Bob Monfore of Springfield, South Dakota, was one of those coming of age at this time and planning to join the military.  At the time, he could not have known how big a part of his military life Korea and Vietnam would become.   Too young to serve, Bob followed WW II as best he could.  Bob would follow his father--who served in WWI and WWII--and would be a part of the Monfore family’s long, proud history of answering the call.  Bob enlisted in the Army on September 26, 1946, just 12 days before his 18th birthday. He did his basic at Fort Benning, Georgia, and completed the Engineer Basic Course at Ft Belvoir, Virginia.   In the next five years, Lieutenant Monfore had numerous engineer assignments at Itama and Nagoya Air Force Bases in Japan, and at Kimpo Air Force Base in Korea.

The Korean War broke out on June 5, 1950.  At the time, Lieutenant Monfore was at Fort Bragg, North Carolina, where he finished his tour and on January 23, 1953, joined the war effort in Korea by being assigned to the 206th Engineers.  While there, he was involved in various engineering projects and equipment maintenance until the war ended with the signing of the Armistice Agreement on July 27, 1953.  After the end of the war, Captain Monfore remained in Korea as an adviser to the Republic of Korea troops as they constructed military facilities, at times using North Korean prisoners as laborers.

Bob left Korea on April 29, 1954, bound for Fort Campbell, Kentucky where he would remain until he left the downsizing Army on October 31, 1954.  Back in Springfield, South Dakota, on November 29, 1956, Bob was appointed Commander of B Company of the 137th Engineer Battalion, a newly formed National Guard Company that Bob was instrumental in organizing. Bob was named commander of the National Guard’s Headquarters Battalion at Wagner, South Dakota, in 1957.

In the late 1950s, in addition to his work with the National Guard, Bob spent his time farming.  It was a time in the Great Plains of severe drought and wind erosion, conditions not conducive to farming.  At the same time, situations around the world were heating up and his military services were needed, so he reentered the service on August 1, 1961.  From 1963 until March of 1970, Major Monfore served in Rangoon, Burma; Fort Knox, Kentucky; and Seoul, South Korea.  At that point, Lieutenant Colonel Monfore reported to Vietnam where he would face his toughest challenge yet in commanding the 62nd Engineer Battalion in a dangerous war in South Vietnam.

The landscape of Vietnam was full of jungles with plenty of cover for the enemy to hide.  For security purposes, much of the cover had to be removed, a job for the army engineers and specifically the 62nd Engineer land clearing battalion commanded by LTC Monfore, who helicoptered to and from the battalion work sites.  With 110 bulldozers at his command, the 62nd cleared over a million acres of land and plowed paths for roads for military movement.  The bulldozers did their work subjected to enemy fire, landmines, and booby-traps.

On May 8, 1971, LTC Monfore’s demanding tour in Vietnam ended with his assignment to the Office of the Deputy Chief of Staff for Personnel in Heidelberg, Germany, where he finished his career. He was promoted to full Colonel on January 27, 1973, and retired from the Army on December 1, 1973, having served 27 years as a Combat Engineer.  During his 27 years in the army, he was awarded the WWII Victory Medal, Army OCC (Japan) Medal, Parachute badge, Glider Badge, Army OCC (Korea) Medal, Senior Parachute Badge, Korean Service Medal, National Defense Service Medal, ROK PUC, Bronze Star Medal, Vietnam Service Medal, UN Service Medal, AFEM, JSCM, ARCOM, LEGION OF Merit, and RVN honor Medal. Colonel Monfore returned to his farm in southeastern South Dakota to spend the rest of his life farming and raising a family, satisfied that he had done his duty in service to his country and thankful for all of the memories.