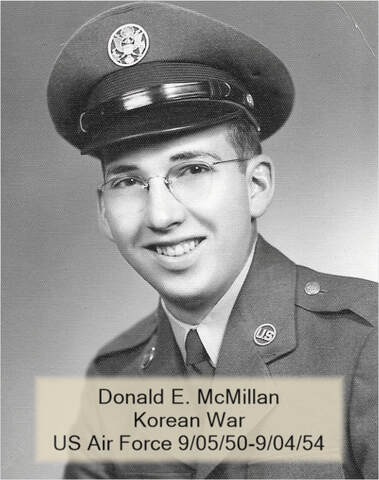 Even before the end of World War II, the United States blundered by allowing the Soviet Union into the war against the defeated Japanese.  Being In the war at the end earned the Soviet Union a spot at the peace table and a chance to cause all kinds of problems contributing to the division of Korea into the North dominated by Communism and the South dominated by Democracy.

On June 25, 1950, hordes of Communist North Korean soldiers crossed the 38th parallel invading South Korea initiating a United Nations response lead by the United States, headquartered in Tokyo, Japan.  After a year of the two warring sides moving each other all over the peninsula, the war became static along the 38th parallel.  In July of 1951. the two sides began armistice talks.  For the next two years, as the talks dragged on, the movements of the war remained static along the 38th parallel but no less deadly as the fighting continued.

During the summer of 1950 with the war raging in Korea, Don McMillan decided to join the military.  The National Guard unit in Chamberlain was out as his doctor wouldn't pass him for the physical.  He decided to join the Air Force.  He went to Sioux Falls for a physical, passed it and enlisted just before Labor Day on September 5, 1950.  Don’s first assignment was basic training in San Antonio, Texas.  Prior to the Korean War, the Air Force was part of the Army and was called the Army Air Force.  There were so many enlistees that many had to be barracked in tents.  Initially, the new air force lacked the resources to completely uniform its recruits.  The training squadron Don was in was one of the first to get the Air Force Blue uniforms.  Many were not issued military shoes for some time.  Because there were too many recruits at San Antonio, Don was in San Antonio for only a week when he got shipped, via bus, to Wichita Falls, Texas to finish his basic training.   The air force base there was the training center for airplane and engine mechanics.  It was also Don’s hell for 5 weeks. Basic training was only six weeks at that time.  Wichita was one of the two bases Don was stationed at in four years which had airplanes.  Don never did fly in an air force plane during his four years in the US Air Force.

After completing basic, in January of 1951, Don was sent to Cheyenne, Wyoming to take training as an Installer—Cableman, because of his high test scores, his first choice.  Warren Air Force Base in Cheyenne was a very old base going back to the time when the Calvary had a camp in Cheyenne.  The poor living conditions at Warren made for an unpleasant six months for Don.  The school turned out to be a six-month school in learning how to install and repair telephones.  At graduation in June of 1951, there was a request for some of the top graduates to stay on as instructors. Don liked Wyoming, if not Warren, and was second in this class, so he applied for the position and was accepted.  Subsequently, he was sent to the instructor school to be trained as an instructor in the Installer-Cableman school.

Don had hopes of staying on at Cheyenne for the rest of his enlistment;  however, there was a "hurry up” call for telephone workers in the Far East, so he prepared to be shipped out on his way to Japan and assigned to the telephone crew for the Far Eastern Headquarters, Japan.  Don was assigned housing in a commandeered hotel building across the street from the palace of Japan's Emperor. In a strange twist, Don’s work required him to work with equipment given to Japan by fellow Axis power Germany.

Because Japan was prone to earth quakes, Don often experienced ash trays falling over and buildings shaking.  On an exploration trip to the basement of the building where he lived, Don was surprised to discover that the building was built on springs to absorb the shock of the frequent earth quakes. The Airman's club, also across the street, was as nice a club as Don had ever seen.  Don worked at the site of the headquarters of the US Air Force which was housed in one of the tallest, at the time, buildings in Tokyo.  Don said he came in contact with more rank there than he had ever seen before.

After being in Japan for some time, Don was promoted to Sergeant and was appointed to a crew chief which was a supervisory position that gave Don more free time than he was accustom too.  With the extra free time, he was able to visit Mt Fuji, the Great Buddha statue in Kamakura South of Tokyo, and other places of interest in Japan.

After spending 18 months of overseas duty in Japan, Don’s tour of duty in Japan ended and he returned to the states on a ship called the Funston. It was a smaller, older transport ship with war brides (married to GIs) along with other military personnel aboard.  Because of the bad weather the ship encountered, many of the Japanese brides got very sick on the smaller rocking ship.

Don landed in the state of Washington in February of 1954. Before leaving there, he was given the opportunity of getting out of the military. He only had about six months left and was offered early discharge. The catch was he would have to enlist in the reserves. He decided to complete his full tour of duty and discharge from the air force.  He was sent to Andrews Air Force Base in Washington, DC, where he worked on transmitter sites until his enlistment was complete on September 4, 1954.  During his time in the Air Force, Don attained the rank of Staff Sergeant (E-6) and was awarded the Universal Service, Korean Service, Good Conduct and National Defense Service Medals.

Don returned to civilian life in South Dakota, where he raised a family and spent most of his professional life as an instructor at the University of South Dakota at Springfield.

Written by the late Donald McMillan, edited by Dick Martin with assistance from Nancy McMillan Flammang.