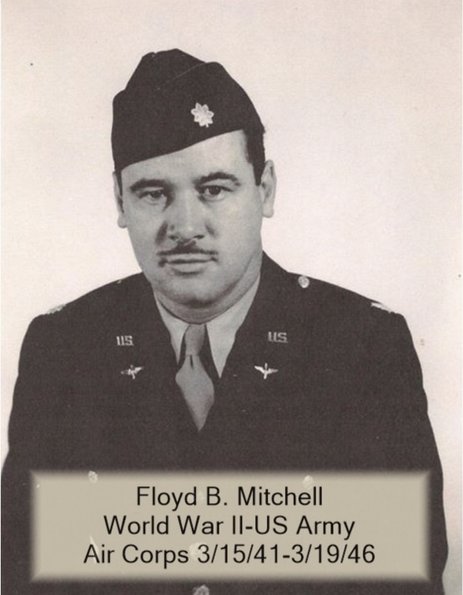 In the spring of 1933, Floyd B. Mitchell graduated from The University of Iowa.  In addition, and much more significant than he could imagine at the time, he finished his ROTC training and was commissioned an officer in the United States Army.   The world situation was still fairly quiet in the Atlantic and Pacific Theatres, so Floyd had no inkling of what was to come.   He spent the next eight years fulfilling his commitment in the Army reserves while beginning a teaching and coaching career at Parkston, South Dakota.

By 1941, the world situation became much more problematic and the United States began to “beef up” for what was looking like a tumultuous next few years.  On March 15, 1941 Major Floyd Mitchell entered the active service.  He was destined for the 446th Bombardment Group, but initially spent time running the Postal Exchange at Moffett Army Base in California.

On April 1, 1943, the 446th Bombardment Group (Heavy) was activated at Davis-Monthan Field, Tucson, Arizona.  The group was made up of Headquarters and the 704th, 705th, 706th and the 707th Bombardment Squadrons.  Most of the personnel came from other 2nd Air Force stations.  Major Floyd Mitchell was made Ground Executive Officer of the 705th Bombardment Squadron.  Training began in earnest.  The air echelon and the ground crews met in Orlando where they took training in as close to combat conditions as was possible.  The next stop in their training was supposed to be Alamogordo, New Mexico.  Before they could begin training, their training site was changed to Lowry AFB in Denver, Colorado, a much more hospitable weather spot. While at Lowry, Floyd made use of his pre Air Force experience and coached football.  His team played the University of Colorado and lost 18-6.  Floyd spent four and a half months training at Lowry Field.  At the conclusion of training on October 18, 1943, the ground element left for Camp Shanks, New York and on October 25th embarked on the Queen Mary for England where they arrived on November 2, 1943.  The aircraft left Lowry AFB on October 20 and flew the Southern route through Florida, Puerto Rico, Brazil, Dakar, and Marrakesh; the 446th would conduct its operations against the enemy in Europe and earn the nickname, the “Bungay Buckaroos.”

As Ground Executive Officer of the 705th squadron, Major Mitchell was tasked with controlling what the commander saw, and spent his time oiling the effectiveness of the senior leadership.  Major Mitchell ensured that the squadron ran smoothly and that all aspects of an efficiently run operation were addressed so that maximum effort could be directed at the German war machine.    He was an assistant to the commander and made it possible for the commander to be effective in his leadership role.   As an indication of Floyd’s effectiveness during this time period, the citation awarding him the Bronze Star Medal said in part:
“ He directed the ground activities of the Group in all its phases since the organization became operational,  that he exercised a firm and steady control over station life,  and that he fostered smooth working relations among the group which  resulted in a spirit of cooperation which was reflected in the operational success of the Group.”

From December of 1943 until April of 1945, the 446th operated chiefly against strategic objectives on the European Continent. Missions included such targets as U-boat installations at Kiel, the port at Bremen, ball bearing works at Berlin, aero-engine plants at Rostock, motor works at Ulm, and oil refineries at Hamburg and Magdeburg.  Planes of the 446th were part of the first heavy bombers at Normandy on D-Day and bombed marshalling yards, bridges, and road junctions during the Battle of the Bulge.  Tactical missions included support and interdictory operations, hitting bridges, gun batteries, and enemy troops, and dropping supplies to Allied troops at such places as Wesel and Nijmegen.   From its first mission on December 16, 1943 until its last mission on April 25, 1945, the 446th Bombardment Group flew 273 missions, and dropped 16,819 tons of bombs, losing 58 aircraft and 500+ KIA or MIA.

With the ending of the war, the 446th Bombardment Group redeployed the air echelon to the United States in June of 1945.  The ground personnel prepared the base to be turned over to the Royal Air Force and returned to the United States arriving on July 11, 1945.  Lieutenant Colonel Mitchell did not return until September 9 of 1945.

Lt Col Mitchell was discharged from the Air Force on March 19, 1946.  At that point he had been awarded the EAME Ribbon w/4 BR Stars, the American Defense Ribbon, the Victory Medal, the Bronze Star Medal, and the American Theater Ribbon. In civilian life, Floyd went on to a distinguished career as a coach and teacher spending most of the years as head basketball coach while assisting in other sports at Southern State College in Springfield, South Dakota.