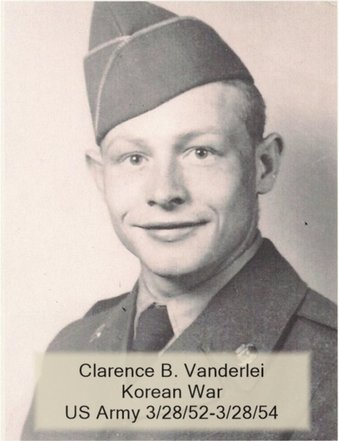 American involvement in the Korean War was well into the second year when, on March 28, 1952, Clarence Vanderlei volunteered and was inducted at Sioux Falls into the U.S. Army.  Clarence grew to manhood on the family farm west of Springfield.  He attended Perkins and Donnelly rural schools and graduated from Springfield High School in the class of 1949.  As a farm boy, Clarence early on developed great interest in everything mechanical.  He felt compelled to understand how machines worked and developed a significant knowledge of mechanics, which would bode him well in his subsequent and successful military service.

At the Potsdam Conference in 1945, the Allies decided to split Korea into two parts at the 38th parallel. North Korea became a Soviet-supported communist regime under Kim Il-Sung; South Korea became a U.S. supported democratic state under Syngman Rhee.  On June 25, 1950, the North Korean People’s Army (NKPA) crossed the 38th parallel, invading South Korea to unite the peninsula under one communist government.  Within a few days, North Korean tanks had advanced through Seoul, the South Korean capitol, down to Pusan, the southern tip of South Korea and threatened the very existence of the Rhee government.  On June 27, President Harry Truman formally requested United Nations military intervention and committed U.S. naval and air forces to defend South Korea.

By March 1952, as Vanderlei joined the fight, much had changed with the military conflict in Korea. General MacArthur had successfully launched the Inchon Invasion.  America was joined by twenty-one other UN countries in commitment of troops to defend the South, although over 80% of the total force was U.S.  UN forces advanced north across the 38th parallel in pursuit of the retreating NKPA, nearing the North Korea border with the People’s Republic of China (Communist China).  The war greatly expanded when China joined forces with the North Koreans and confronted the UN forces resulting in a courageous but desperate tactical retreat south, eventually consolidating near the 38th parallel.  In April 1951, in a controversial move, Truman replaced MacArthur and named General Mathew Ridgeway as the Theater Commander.  Peace talks had started but were getting nowhere.  The war had stalled with repetitive offensives repelled by both opposing forces.

Clarence received his basic training at Camp Breckinridge, near Morganfield, Kentucky.  Breckinridge was originally a WWII prisoner of war camp. During the Korean War, the camp was headquarters of the 506th Regiment of the 101st Airborne and was also used for basic training of newly inducted U.S. Army recruits. With his mechanical capabilities readily apparent during basic training, Clarence was selected from among the new recruits to partake in specialized training in truck vehicle mechanics.  In October 1952, he was shipped out of San Francisco to a seven week service school at the Ordinance Depot in Tokyo, Japan. There, he learned the expertise necessary to maintain the M-4 high–speed tractor vehicle used to tow the unit’s huge 8-inch howitzer artillery pieces.  Upon his successful completion of this training, Clarence was assigned to Battery C, 424th Field Artillery Battalion.

In December 1952, Corporal Vanderlei was shipped out of Sasepo, Japan to Puson, Korea and joined his unit.  It was Vanderlei’s primary duty to maintain the Battalions’ M-4s in pristine working condition, ready for combat at a moment’s notice.   He was also occasionally called to assist in the mechanical maintenance and repair of the Battalions’ jeeps, 2 ½ ton trucks, and other motor vehicles.

The 424th was positioned within the Kumhwa Valley area, north of the 38th parallel, and provided fire support in many battles in that area during Vanderlei’s stint.  The UN-occupied hill mass known as Boomerang Hills was key terrain and faced Chinese-held hills just several hundred yards away   On June 14-15, 1953, in an attempt to capture the Boomerang Hills, defended primarily by South Korean forces, the Chinese launched a massive offensive involving human wave attacks preceded by never before seen concentrations of artillery fire.  The Chinese offensive required a large forward movement of U.S. Army reinforcement, including the 424th.  During this engagement, Vanderlei’s unit, which included 3 batteries of 4 guns each, was instrumental in repelling the attack by expending over 800 rounds of ordinance upon the Chinese.

Clarence was relieved from combat in January 1954 and honorably discharged from active duty at Camp Carson, Colorado, on March 27, 1954.  During his service, Clarence was awarded the Korean Service Medal with 2 bronze stars, United Nations Service Medal, National Defense Service and Good Conduct Medals.  He returned to the Springfield area following his discharge, married, and entertained a successful career in farming for several decades.  He and his wife Lila, are now both retired and reside in their country home west of Springfield.
Jim Kirk