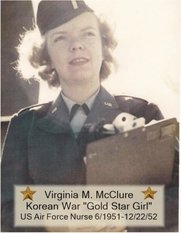 Causalities of war derive from many faces.  We tend to think of combat related fatalities first. In fact, historically, more military deaths and disabilities have occurred in war from disease, illness, and accidents than from the battlefield.    Virginia McClure moved with her family to Springfield, SD, from Tabor, Iowa, when her father, E.R McClure, purchased the Springfield Times and became the newspaper's publisher.  The year was 1938 and Virginia completed her senior year of high school at Springfield graduating in the class of 1939.  She advanced her education at Southern State Teachers College and the Lutheran Hospital for Nurses, in Sioux City, Iowa, graduating as a Registered Nurse in 1943.  She worked at the hospital for two years and then, over the next  six  years,   was employed in an X-ray and radium laboratory in Sioux City, during which time the Korean War broke out.   During her years of nursing in Sioux City, Virginia often attended and provided medical care to WWII veterans. According to her father, she held a special place in her heart for these men and women under her care.  As America again found itself at war in the Korean conflict, Virginia was compelled, in June 1951, to enlist into the United States Air Force Nursing Service.   She was inducted in Sioux City, attained the rank of First Lieutenant, and was assigned to the hospital at Keesler Air Force Base, Biloxi, Mississippi.

During the Korean War, the United States military introduced a new concept of transport to improve efficiency of medical treatment for troops wounded on the battlefield.    It was in Korea that the system of airborne evacuation of the wounded directly off the battlefield to an advanced mobile army surgical hospital (M.A.S.H), was conceived.  The M.A.S.H. units were placed close to the front in temporary locations dependent on the battle lines and situation.  Wounded troops could be evacuated directly off the field (usually by helicopter) and transported to a nearby M.A.S.H where emergency surgery or other critical life-saving treatment could be more quickly performed.  Following the emergency treatment, the wounded were then transported by either helicopter or transport planes to permanent hospitals in the rear areas.   Virginia desired to serve within the mobile evacuation system and applied for overseas service.  She was assigned for duty in the far east 801st Airborne Evacuation Service, which allowed her to fulfill a dream of becoming a flight nurse.  Lieutenant McClure served as flight nurse on a C-47 Skymaster transport plane, first at Kachikawn Air Base in Tokyo, then at Brady Air Base, southern Japan.  On December 20, 1952, she was flown to Korea for a 30-day temporary assignment.

In a letter home, written December 21, the day before her death, she told of her arrival in Korea and described the nurses' quonset huts that had no modern conveniences but which had been adorned by the nurses stationed there with elaborate decorations for the holiday season.  She was eager to get into action directly in the line of combat.   Her assignment was to assist on the planes bringing the wounded from the forward areas back to the base hospitals.

Her dream of service was cut short the following day when thirty-year-old First Lieutenant Flight Nurse McClure, along with the eleven other occupants of their C-47, were killed in a tragic accident about forty miles south of Seoul when their plane collided on the runway with a shot-up Air Force F-80 jet fighter attempting to land.  The F-80 pilot was also killed.  Although she got to Korea to serve her country in the capacity she desired and trained for, by pure chance of fate, she was never given the opportunity there to fulfill her dream of service.  One colleague remembered that Virginia was kind to everyone she met and was generous to all.  A superior officer wrote "…her eagerness, attention to duty, and personality were of the very best, and it was a pleasure to have her under my command".

Lieutenant Virginia May McClure was awarded the Air Medal, Purple Heart, the Korean Service Medal, National Defense Service Medal, Korean War Service Medal and the United Nations Service Medal.   She was buried next to her mother in the Fontanelle Cemetery, Fontanelle, Iowa, with full military honors.