Gene and Larry Lang grew up in Springfield in the late 1950s and 1960s.  Both of them were born in the Philippine Islands after their parents, Evelyn and Le Roy, got caught up in the chaos of the Japanese invasion and found themselves spending three and a half years in a Japanese Internment Camp until they were liberated by the First Cavalry of the 40th Division three and a half years later on February 3, 1945.  The following is a description of their time in the camp as related by Evelyn to her son Gene.                      By Dick Martin
Santo Tomas Internment Camp
My Parent's Experience
By Gene Lang

A few hours after the attack on Pearl Harbor on December 7, 1941, Japanese warplanes began raiding Philippine cities.  In less than a month, the Japanese were in possession of Manila.  On January 8, 1942, allied civilians were rounded up and brought to the Santo Tomas University Compound.  My mother, Evelyn (Anderson) Lang and my father Le Roy Lang, formerly of Gregory and Dallas, South Dakota, were current residents of Mindanao in the Philippines.  They were in Manila for a ten-day business trip that turned into three and half long years of captivity under the Japanese Imperial Government.

The original 5,000 persons of various nationalities were eventually sorted out and thinned to 3,700 men, women and children confined to Santo Tomas.  Of this group, the ones that suffered the most from malnutrition and other afflictions were individuals fifty years old and over, and those that gave up hope of being saved early in the game. Due to the malnutrition, many people lost a considerable amount of weight, which is what happened to my father.  At the time of his capture, he weighed 210 pounds, and at the time of his liberation he weighed only 140.

As my mother stated, "The first two years weren't bad because the camp was operated by civilians, but when the going got difficult, the military took over and eliminated all the privileges we had become accustomed to. Then, as the war progressed in our favor, conditions became worse and worse."

Early on, the internees were permitted to buy necessary food and clothing from the outside, and friends on the outside were able to send food and other essentials.  Eventually, the monetary system dropped out and goods were no longer available.  The third year of their internment was the worst.  Food and medicine were scarce, and internees were allowed only two meager meals a day.  As Mother put it, "People grew weaker and weaker every day and many died."  Towards the end, the prisoners were down to eating roots and whatever few greens they could grow in the unproductive soil, in an effort to supplement the starvation diet of rice and corn allotted them by their captors.

The camp was infused with Japanese propaganda.  If the internees had taken seriously all of the propaganda aimed at them during their confinement, their hope of liberation would have never seen them through.  On numerous occasions, according to the Japanese news agencies in Manila, the entire American fleet was eradicated, air forces were wiped out, and landing operations were destroyed by the Japanese Imperial Forces.  The prisoners had another side of this picture, though.  As my mother explained, they were kept abreast by the "bamboo telegraph" that let them know of the goings-on outside, and they never doubted that their day was coming.

My mother did not elaborate, nor would my father, on this "bamboo telegraph," but by this method, information was transferred from the outside to the inside of the camp.  The camp also had a public-address system that was used for announcements and calling the camp to attention.  This PA system was also used, from time to time, to relay tidbits of information to the internees. The Japanese guards suspected it, but could never prove it. One example: After the American invasion of Leyte, the announcer closed his broadcast by saying, "Better Leyte than never," which  the  guards did  not  pick up on. Mother stated that through all of the hardships and disappointments, it was not a gloomy camp and they kept their spirits high.  She said, "We organized classes of study, Catholic and Protestant services, and enjoyed musical programs and   shows put on by professional entertainers in the group.  And we had our work to do, so we kept busy most of the time."   My dad's services to the compound included maintaining an emergency water reservoir for the camp. He was to wear armbands signifying types of details: one to permit him to go behind closed doors, another for "water boy," and a third for emergency water tender.  The armbands were inscribed in Japanese, so learning which one went with what duty was very important. My mother's duties included acting as the monitor for a woman's dormitory.

My parents spoke of some of the atrocities committed against the internees.  On one occasion, for instance, several who attempted escape were returned to the camp for execution.  After digging their own graves, these internees were executed, along with the monitors who were responsible for the escape that occurred under their watch.  These executions were carried out in the presence of the entire camp.

As the day of liberation approached, Allied air forces flew over and dropped pamphlets, letting the internees know that General MacArthur was on his way to liberate them.  Of course, these leaflets were hurriedly confiscated by the guards and disposed of.  Anyone caught looking at the sky as the fighters flew over - or anyone caught reading the leaflets - were sentenced to death.

As the fight ensued, the internees were caught in the crossfire between the Japanese and Allied forces, and there were injuries and some casualties.  By the fourth day of the liberation, the worst was over, and General MacArthur rode into camp.  The three and half years of confinement had come to an end.  On February 3, 1945,the First Cavalry took Santo Tomas, and the official flag raising of "Ole Glory" was truly an occasion for celebration.  There was periodic shelling and fighting in Manila for a short period of time thereafter, but in March, my mother and father sailed for the States and arrived in Los Angeles on May 3, 1945.  Thirty-five days at sea, but they were free! 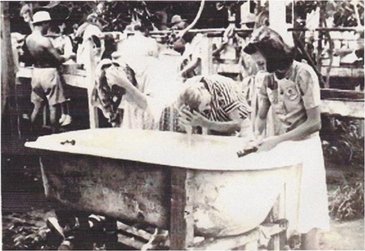 Women internees washing their hair in a communal bath 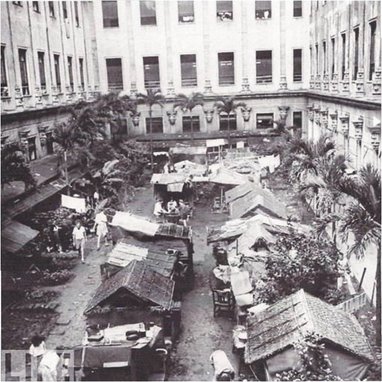 Shanties built by internees to get away from the crowded dormatories. 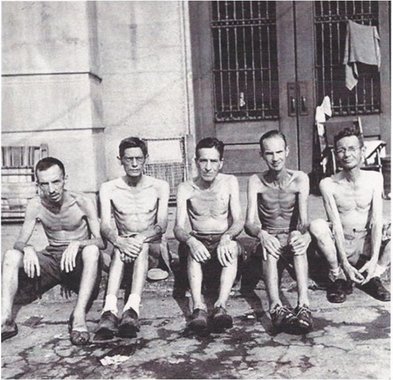 Male internees lost an average of 53 pounds during their 37 months at
Santo Thomas. 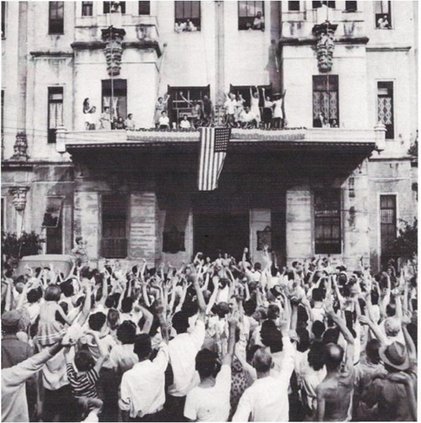