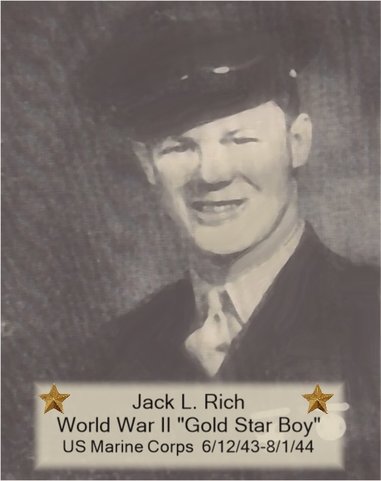 Jack Leroy Rich, son of Mr. and Mrs. Steven Rich, was born in Springfield, SD, August 19, 1924.  Jack attended Lincoln Rural School through the 7th grade.  He completed 8th grade and his high school education at Springfield High School graduating in the Class of 1942.  An outstanding high school athlete, Jack earned letters in both basketball and football all four years he attended Springfield High.   Jack then attended Southern State Normal for one year and was a standout and letterman on the Normal School football team.   In the spring of 1943, with America at war and struggling to build a war machine to defend itself and eventually defeat the Axis Powers, Jack elected to postpone his education plans and enlist in the Marines.  He was inducted into the U.S. Marine Corp at Ft. Crook, Omaha, Nebraska on June 12, 1943.  Jack received his basic training at Camp Elliot and other bases near San Diego, California.  Following his basic training, Rich was assigned to Company K, Third Battalion, Ninth Marine Regiment, Third Marine Division.  The Ninth Marines were sent to the South Pacific Theater of Operations on December 4, 1943.

It is easy to forget that December 7, 1941, “the day that will live in infamy” included the Empire of Japan’s attack, not only at Pearl Harbor, but also on U.S. military bases on Wake, Guam and the Philippine Islands.  The result was Japanese eventual capture and occupation of these and other strategically critical islands.   In 1943 and 1944, it was the primary mission of the U.S. Marines Corp to defeat and reoccupy all the territory seized by the Japanese and eventually push them back to their home islands.   Jack Rich and the Ninth Marines were at the forefront of this effort and in 1943, among the first United States Marines to land at Bougainville in the Solomon Islands.

In January 1944, the Ninth Marines and the rest of the Third Marine Division were sent to Guadalcanal following two months of combat in Bougainville.  The Ninth remained on Guadalcanal until the morning of June 2 when Jack and the other Marines were loaded aboard troop transports and sailed to Kwajalein in preparation for the invasion of Guam.   The convoy arrived on June 10 and was boarded on LSTs to proceed to Guam together with Task Force 53, a giant armada.  The Task Force included major battleships and aircraft carriers that loomed far above the LSTs.  It was reassuring to Jack, that although now silent, these great warships, bristling with firepower and spoiling for a fight, were on his side.

Because of an anticipated naval battle at the time of the Saipan invasion, the Guam campaign was delayed and the Ninth Marines became a floating reserve for Saipan.  Rich and the Ninth Marines aboard the LSTs were then separated from the huge Task Force and sent back to the Marshalls.  It was at this time that the small convoy of LSTs and LCIs was attacked by four Japanese torpedo bombers.   All four planes were quickly shot down into the sea although one of the LCIs was hit during the brief encounter.  The entire bow of the LCI exploded and the forward gun crew, firing at the Japanese planes, disappeared.  Jack and the other Marines stood topside watching the action and cheered like spectators at a football game as the enemy planes were shot down.

The convoy proceeded without further incident and put in at Eniwetok where it impatiently remained afloat for 27 days.  W-Day for the invasion of Guam had been set originally for 3 days following the Saipan assault, presumably June 15.    The actual invasion did not occur until July 21.  Task Force 53 had struck the Japanese airfields and installations with naval gunfire softening the Japanese in advance of the Ninth Marines advance to the beach in landing craft.   Jack and Company K were among the first of 20 waves to land.  Upon hitting the beach, Jack and the other Marines had to scramble over 500 yards of open and flat beach.  The Marines were raked by machine gun and small arms fire.   Casualties were heavy, but Jack made it to the first available cover which consisted of small hills and dunes.   The Marines dug in on a ridge and received heavy mortar fire throughout the night. Casualties continued to mount.  Company K was in continuous combat for the next several days and was a part of a second landing on Cabras Island just offshore from Guam.

Jack and Company K returned to the main island by July 26 with orders to move north incurring continuous engagement with Japanese troops.  Jack had thus far endured the battle unscathed but his luck ran out on August 1 when a Japanese hand grenade exploded between his legs.   Corpsmen carried him away from the frontline and he was transported to a hospital ship anchored offshore.  Although both legs were amputated in attempt to save Jack’s life, he died later that day.  He is buried at the National Cemetery of the Pacific at Honolulu, Hawaii, and was posthumously awarded the Purple Heart.    He was nineteen years old on the date of his death.

In September of 1944, family, together with Dwight Wood American Legion Post, conducted a memorial service in honor of Jack’s memory.  The service was held at the Congregational Church in Springfield at which time the U.S. flag, which shrouded his casket, was presented to Jack’s sister Grace and his mother.  In later years, that flag was donated by the family to Southern State College.  For decades, a tribute to Jack was read to the crowd proceeding each Founders Day football game as  Jack’s flag flew over Southern’s football field.

A substantial portion of this biography was derived from the book “A Sparrow Among the Bluebirds” written by Wayne Barham, a Marine comrade and close friend to Rich.