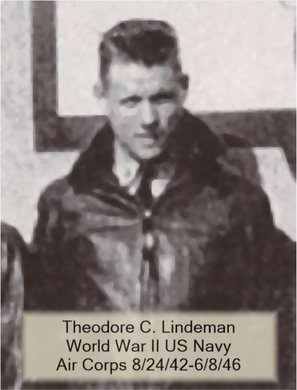 With the war raging in the Pacific in mid-1942, the United States Navy, needing a long-range reconnaissance and anti-submarine warfare capability, settled on developing a version of the Army Air Force's well known and highly respected B-24 Liberator, later to be known as the PBY4Y-2 Privateer.  The Privateer was developed into a 70,000 pound aircraft bristling with twelve .50 caliber machine guns and capable of carrying and delivering ordnance ranging from bombs, depth charges, napalm and guided missiles; a weapon more than adequate in satisfying the Navy's requirements.  To man the new state-of-the-art aircraft, the Navy needed a supply of airmen qualified to be trained in the operation of the advanced warplane.  As usual, the country was able and willing to supply a quality supply of men ready to fill the need.

When the war broke out in late 1941, Ted Lindeman from Yankton, South Dakota was only 17 years old but was determined to answer the call.  He got his parents to sign an exception allowing him to enlist in the Navy on August 24, 1942.  He enlisted as an aviation cadet to pursue his passion to be a Navy pilot.  His qualification made him a natural candidate to fill a crew position on the developing Privateer.  To prepare for the position, Ted began a concentrated series of training assignments; first on the list being to obtain his commission as a Naval officer, which he did at the Naval Air Stations in Memphis, Tennessee and Pensacola, Florida.  Following his commission as an Ensign, Ted took flight training at Lake City, Florida; Buford, South Carolina; Pensacola, Florida; and Alameda, California.  He took his training on the Privateer at Hutchinson, Kansas and Alameda, California. He was assigned to Patrol Bombing Squadron VPB-123, and in May of 1945 Lieutenant (JG) Ted Lindeman and the new sophisticated Privateer were ready to join the war in the pacific.

By May 31, 1945, VPB-123 with Ted Lindeman had deployed to USAAF Yontan Field, Okinawa with a short stop at NAB Tinian in the Marianas.  Although the war in the pacific was coming to an end, Fleet Air Wing One (FAW-1) with Lieutenant (JG) Ted Lindeman and Patrol Squadron VPB-123 had plenty of work to do in helping bring the war to a conclusion.  From their base at Yontan Field in Okinawa, Ted in his Privateer and the rest  of VPB-123 ranged over the coasts of Korea, through Chosen and the Tsushima Straits,  over the coasts of Kyushu, Honshu and Shikoku, Japan, and over the coast of China as far North as the Shantung peninsula.  From May 31, 1945, the beginning of deployment in Okinawa, until the end of hostilities on August 15, 1945, Lieutenant (JG) Ted Lindeman’s squadron, VPB-123, flew 230 combat missions and sank 67 enemy ships (40,370 tons), shot down 9 enemy aircraft, and brought incalculable damage to enemy rail communications and dock installations.

With the dropping of the atomic bombs on Hiroshima and Nagasaki, Japan, the war ended and Lt Lindeman and the rest of the squadron started the long trek back to a life free from flak, enemy aircraft and the other dangers of war.  Before this could happen, Lt Lindeman had his closest call of the war.   Shortly after the war was over, Lt. Lindeman and his crew finishing up a patrol on their way back to Okinawa found their flight path took them near Nagasaki.  They had heard about the destruction of the atomic bomb and decided to swing by and take a look from the air.  Unknown to Lt. Lindeman, the Japanese had positioned barrage balloons over the city.  When Lt Lindeman took his plane in for a closer look, he came very close to losing his plane on one of the cables.

After the war ended, the squadron deployed to NAB Agana, Guam and then back to Okinawa and NAB Yonabaru, to provide security patrols and typhoon tracking for the US Pacific Fleet.  On November 19, 1945 Patrol Bomber Squadron VPB -123 was relieved and assigned to its new home port at Naval Air Station, Barbers Point, Hawaii.  Most of the members of the squadron spent the rest of their time in the Navy filling various maintenance roles.

Lieutenant (JG) Ted Lindeman returned to the United States and on June 8, 1946 was separated from the United States Navy.  After completing dental school at Northwestern University in Chicago, Ted set up a lifelong practice in Springfield, South Dakota, raising a family and providing dental service for the Springfield area as well as introducing flying to many of the locals and being instrumental in the construction of a small rural airport in Springfield.