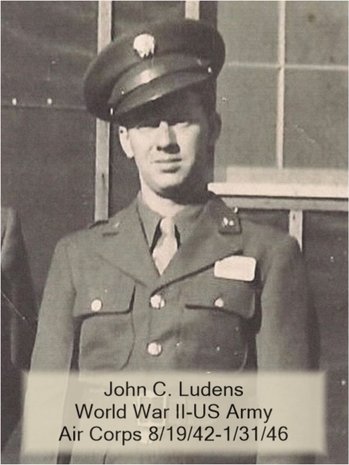 World War II introduced the airplane to the United States as a key component in our war effort. The tremendous increase in air traffic brought on by the war demanded that some order be brought to air traffic in the skies in the United States and in the world. Just as the highway system in the United States provided all the necessary tools to efficiently and safely move motorized traffic about the country, a system was needed to do the same with air traffic. The country’s answer was the Army Airways Communications Service. To accomplish its mission, it would have to be manned by a large number of individuals capable of being trained in numerous different technical specialties. One of those specialties was “control tower operator” and one of those individuals was John C. Ludens from Springfield, South Dakota.

John C. Ludens was inducted into the US Army Air Force in Omaha, Nebraska on August 19, 1942. He took his basic training at Sheppard Field in Wichita Falls, Texas, beginning September 9, 1942 followed by radio school at Truax Field in Madison, Wisconsin from October 7, 1942 through February 4, 1943 and advanced training in Salt Lake City, Utah and Smokey Hill Airbase in Salina, Kansas.  John C was part of a group of 50 men that established the airfield at Great Bend, Kansas and on September 3, 1943 became a part of the emerging Army Airways Communications System effort.

The following March, John was sent to Fort McLellan for combat training. He was injured in training and spent the next 56 days in the hospital with a broken foot. After his schooling was completed, he became a radio teletype operator for two months in Honolulu and eleven months at Christmas Island in the Pacific Theatre.

The Army Airways Communications System (Service) (AACS) was expanding from the United States into the Pacific and Atlantic theatres and ultimately throughout the world. The expansion kept its troops on the move, resulting in John C leaving Christmas Island in August of 1945 on his way to Clark Field, Manila, Philippine Islands for combat preparation for the invasion of Japan.
After the atomic bomb was dropped, Japan surrendered and Sergeant Ludens was sent to Japan with the occupation force. He landed at Sasebo Bay on November 2, 1945 and was stationed at Kanoya on the southern tip of Japan and then was moved to Osaka.  While in Japan, John flew over the destruction of the atomic bombing at Nagasaki. As luck would have it, while working a teletype machine on New Year’s Eve, 1945, Sgt. Ludens saw his own name on the shipping order to return to the states for discharge. He left Osaka, Japan on January 13, 1946 on the USS General Meigs and arrived in San Francisco on January 24, 1946. From that point, he took a train to Fort Leavenworth, Kansas where he was discharged on January 31, 1946. He returned to Springfield South Dakota where he farmed, raised a family, and became a rural mail carrier for many years.

The Army Airways Communications System (AACS) went on to be renamed the Air Force Communication System (AFCS) and is today called the Air Force Network Integration Center. It became worldwide and is a huge part of the airways today.  Without it, the airways would not be able to move the number of aircraft in the skies today and to do it as safely as it does. Sergeant John C. Ludens can say he was there at the beginning and had a small part in a big idea.