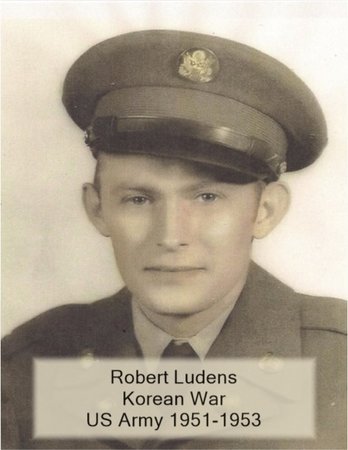 Even before the end of World War II, the United States blundered by allowing the Soviet Union into the war against the defeated Japanese.  Being In the war at the end earned the Soviet Union a spot at the peace table and a chance to cause all kinds of problems contributing to the division of Korea into the North dominated by Communism and the South dominated by Democracy.

During the month of January 1950, Bob Ludens was 21 years old and working at Palsma Holleman Motor Company in Springfield, South Dakota; probably not aware of a speech originating out of the American Secretary of State’s Office erroneously stating that the United States did not consider Taiwan and South Korea as part of the American defensive perimeter.  This historic blunder emboldened North Korea to invade South Korea to unite the country under communist control.  Bob Ludens and thousands of other young Americans were about to spend an important part of their youth in harm’s way in a far-off land in what possibly could have been caused by a misstatement in a speech.

On June 25, 1950, hordes of North Korean soldiers crossed the 38th parallel invading South Korea initiating a United Nations response lead by the United States.  After a year of the two warring sides moving each other all over the peninsula, the war became static along the 38th parallel.  In July of 1951, the two sides began armistice talks.  For the next two years, as the talks dragged on, the movements of the war remained static along the 38th parallel but no less deadly as the fighting continued.
During this period, Bob Ludens was inducted into the army on      January 3, 1951 at Sioux Falls, South Dakota.  He completed his basic training at Fort Riley, Kansas on February 26, 1951 and went to Fort Bliss for advanced training and completed the Radar course, the Guided Missile course and the Radar Maintenance Course.  He finished at Fort Bliss on March 21,1952, took some leave and reported to Ft. Lawton, Washington on April 10 to prepare to ship to Korea by way of Japan to join the war effort.  Bob arrived in Japan on May 4, 1952 and in Korea on May 13, 1952 to join Headquarters Battery of the 57th Field Artillery Battalion of the 7th infantry division.  The war had remained static along the 38th parallel for the past year, but the fighting raged on.  Bob’s battalion was engaged in supporting the 7th infantry division whose responsibilities involved maintaining the allied position along the center section of the allied line along the 38th parallel.

The experience for Bob was overpowering at times as he witnessed the ravages of war and some of the cruelties of the indigenous populations as they dealt with the war.  On one occasion, a fit of absent mindedness may have saved Bob from injury.  He had delivered an officer to the mess hall with instructions to return to pick the officer up at a certain time.  Bob was involved in another activity and forgot about picking up the officer.  During the time that he should have been returning to pick up the officer, his route was heavily shelled with an enemy artillery attack.  When he remembered his instructions, he returned to pick up the officer who was overjoyed to see him, thinking Bob had been caught in the enemy artillery.  During his time in Korea, Bob performed his duties in a professional manner as evidenced by his being awarded the Commendation Ribbon with Metal Pendant.  The citation, in part, reads:

Bob’s tour expired on November 29, 1952 and he returned to the United States a wiser and more mature man.  He received the Korean Service Medal with Bronze Service Star and the United Nation Service Medal.  He was discharged from the army on January 6, 1953 at Camp Carson, Colorado as a Private First Class.  Bob returned to Springfield where he would eventually enter the postal service and spend the rest of his life raising a family and serving in the postal service.