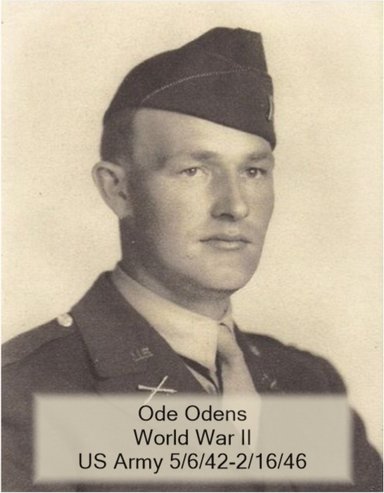 After the allied invasion of France at Normandy on June 6, 1944, the job of the Supreme Allied Commander General Dwight Eisenhower was to move Hitler’s army back across and out of Western Europe.  To do the job for him was the flamboyant British General Bernard Montgomery leading the northern push and the much more sedate American General Omar Bradley leading the southern push.  Eisenhower was frustrated by what he thought was an overly cautious approach by both generals in getting the job done, the big difference being that one of Bradley’s generals was General George Patton whose nature was completely incompatible with caution.  One of the tankers that General Patton relied on in his race across Europe chasing the German army back to Germany was Ode Odens, a tank commander with the 440th Armored Field Artillery Battalion, 7th Armored Division, 3rd Army.  Ode was twenty nine years old, older than most of the young men entering the military from his home in Southeastern South Dakota.    He was familiar with driving a tractor across the tank country of South Dakota.  He would have had to tell you how much that differed from driving a tank across the tank country of Western Europe with Germans shooting at him.  Ode Odens was a rural school teacher and co-owned a trucking service in Southeastern South Dakota in the early 1940s while Adolph Hitler was spreading the Aryan Nation throughout Europe.  Along the way, Hitler made the mistake of declaring war on the United States and ultimately causing hundreds of thousands of young men like Ode Odens to stream across the Atlantic to send Hitler back within the German borders.  Ode was inducted into the army on May 7, 1942 at Ft. Crook, Nebraska.  He then entered the Graduate Officer Candidate Course #40, at Fort Sill, Oklahoma, the Home of the Artillery, and came out a Second Lieutenant in the artillery.

Lieutenant Odens and the rest of the 440th entered France at Normandy at D+40 (40 days after the Normandy D-Day Invasion), and the shooting began.  From that point on Lt. Odens seemed to be in the middle of all the significant battles and happenings in the European theater as the Americans and British pushed the German army out of Western Europe.   If one wanted to witness the rest of the significant events in the European theater during WWII, the best seat, if you didn’t mind doing a lot of ducking, would have been on the back of Lt. Odens’ tank.  Along the way, filling the dangerous position as a forward observer locating the enemy for the battalion and calling in artillery, he would have two tanks shot out from under him with none of his crew being injured; one on October 1st near Oploo, Holland and a second one the next year on April 8 near Oberkirchen, Germany.  He would be a part in the rescue of the 101st airborne at Arnheim in Operation Market Garden; he would be awarded the Bronze Star for valor and the Purple Heart for wounds for his actions near Melun, France on August 24, 1944; he would be awarded the Silver Star for valor for his actions on November 28, 29, and 30, 1944 as his unit entered Germany for the first time;  he would be trapped behind enemy lines for several days during the Battle of the Bulge when he had to hide his tanks in haystacks;  he would provide artillery support at the battle for the bridge at Remagen;  he was among the first allied troops to liberate  a concentration camp, Mittelbau-Dora,  a subcamp of Buchenwald Camp where he had the gruesome task of using his tanks to move train car loads of bodies stacked like wood; he helped re-establish civil government in Germany;  and finally he was  part of the security force for the Nuremburg trials.  After the war, Lieutenant Ode Odens would have been qualified to be an expert consultant in helping Hollywood put together most of the war films that would appear in the nation’s theaters.

After all the excitement, adventure, and danger of the war, instead of going to Hollywood, Ode was discharged in late 1946, happy to return home to live a quiet life on a farm in Southeastern   South Dakota, raise a family, serve on school boards and church boards, etc.; his “made for a movie” experiences in the European theater with General Patton unknown to most of the locals.  Much to Ode’s delight, he was visited by many of his troops after the war, most from a very different part of the country, many that Ode had helped write letters home.  Captain Ode Odens would remain in the inactive reserves until 1953.