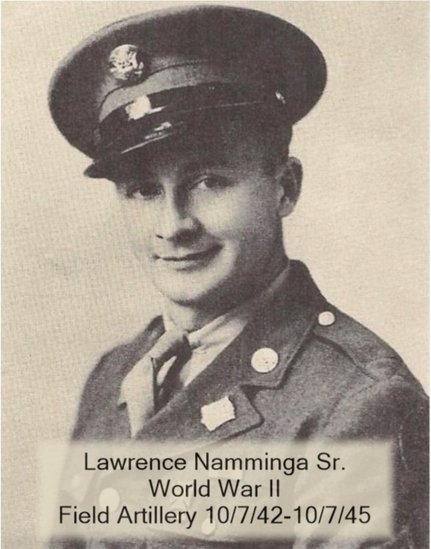 On the morning of December 16, 1944, thanks to the efforts of the German Army’s Field Marshall Karl Gerd von Rundstedt, the life of Tech 4 Lawrence Namminga, Sr (Headquarters Battery of the 118th Field Artillery attached to the 30th Infantry Division (Old Hickory Division)) was about to get much more exciting and dangerous.  In a last gasp, the Germans initiated a counter-offensive through the Ardennes forest that would famously become known as the “Battle of the Bulge,” and the 30th Infantry Division was one of the many obstacles standing in the way.  Tech 4 Namminga, a rural farm kid from Southeastern South Dakota, had answered the call of his country and traded the benign fields of rural South Dakota for the forbidding fields of Central Europe.

Lawrence and 23 other young men from Bon Homme County, travelled by train on October 7, 1942, to Ft. Leavenworth, Kansas to be inducted into military service.  From there, Lawrence completed his military training before joining the 118th Field Artillery, which was attached to the 30th Infantry Division.  The division, after landing at Normandy several days after the D-Day Invasion, along with Lawrence and the 118th began their chase of the retreating Germans across Europe.

Lawrence’s MOS, “Fire Control Instrument Operator” with Headquarters Battery, 118th FA, meant that his primary responsibility was to do the mathematical calculations and adjustments received from the forward observers, that would move the artillery rounds to the target.  When the forward observer indicated they had the target, the order would be given to “Fire for Effect” and rain down protective cover for the infantry forces that were attacking the enemy positions.  The fighting and the exemplary performance of the 118th FA/30th Division in its chase of the Germans is well documented in the history of WWII.

For the months of January and February of 1945, the German efforts to “break out” (known as the Battle of the Bulge) and regain the Port at Antwerp, Belgium failed; and as the German army retreated, it was closely followed by the 30th Division and the 118th Field Artillery.    On March 23, 1945, the 118th FA was the first artillery unit to cross the Rhine River and take up positions in the area.  It was during the crossing of the Rhine River that Lawrence received the Bronze Star.  The Citation states:

"Technician Grade 4 Lawrence Namminga, is awarded the Bronze Star for meritorious achievement and service from 19 March 1945, in Germany.  Technician Namminga distinguished himself during the preparations for the crossing of the Rhine River, by working tirelessly and skillfully in compiling the vast and detailed firing data which his battalion used in giving maximum artillery support to 30th Infantry Division’s assault crossing."

Lawrence and his fellow 118th Field Artillery continued on toward Berlin until May 7, 1945 which was VE Day (Victory in Europe).  “On August 2, the majority of the 30th Division boarded the HMS Queen Mary which had returned to its old berth in Southampton, England for the first time in four years, and on the next day steamed out of the harbor on its way to a tumultuous welcome in New York City.”

The intense fighting and hardships endured by all of the armed forces was finally brought to a close on October 7, 1945 when Lawrence was discharged.  The farm kid from Springfield, like all the other soldiers who fought in that Great War, was able to return to his life in South Dakota.