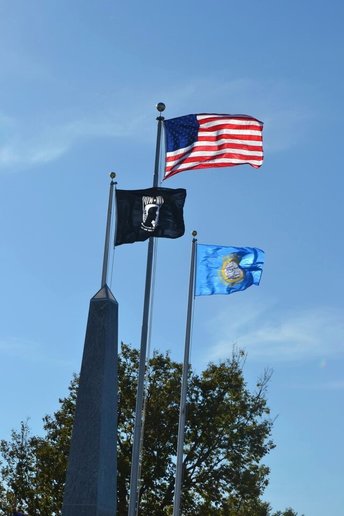 To start with, the memorial site had a picture of the veteran and his dates of service. The average visitor to the memorial website, however, wanted to know more about the service of each veteran.  Consequently, the process of discovering the story of the service of each veteran and writing a short military biography began.  With all of the danger, excitement and courage, the stories were incredible.  Writing the biographies became an exercise in “Can you top this?” The biographies were a great read for the Springfield citizens, but something was missing.  The stories being discovered were, by themselves, amazing but were not presented in any kind of context of the entire war effort.  Consequently, I have put together a narrative of Springfield’s veterans’ contributions to the war in the Atlantic Theater and the Pacific Theatre of World    War II.

Here now is our beginning effort to place the service of Springfield’s WWII veterans in the context of the entire war effort:

The first half of the 1940’s decade had to be the most exciting period in Springfield’s history culminating in Springfield’s most exciting twelve months from the summer of 1944 to the summer of 1945.  The excitement took on all forms from worry to devastation to relief to joy to celebration.  From 1942 until June of 1944, Springfield had its young men scattered everywhere throughout the United States training for what they sensed was going to be big and would occur sooner rather than later.  They were training in such places as Fort Benning, Georgia; Pensacola, Florida; Hutchison, Kansas; Camp Edwards, Massachusetts; Fort Sill, Oklahoma; Truax Field, Wisconsin; Fort Ord, California; Jefferson Barrack’s, Missouri; Fort Russell, Texas; Camp Pickett, Virginia; and San Diego, California; just to name a few.

Starting in the Atlantic Theater, by the spring of 1944, Springfield’s finest began wrapping up their training and migrating to England.  Springfield’s soldiers would show up everywhere as the allies chased the German Army back to Germany.  When the showdown finally happened, it seemed like a big powerful general in the sky sprinkled the Springfield soldiers throughout the entire war effort.

Before the fireworks began in Northern Europe, General Eisenhower created another front in North Africa that eventually worked its way up Italy into Southern Europe.  The front was established to take pressure off the Eastern front where the Russian people were paying a horrible price; to deny the Germans control of the Suez Canal; and to give the American Army a test before the “big dance” at Normandy in Northern Europe.  Springfield was represented in this exercise by John Palsma who was a medic with the Army Air Force and found himself moving from North Africa to Corsica to Sicily and then up the Italian ”boot” to support the allied effort.

On June 6, 1944, Leonard Lange of the 81st Chemical Mortar Battalion would begin Springfield’s story by joining the greatest invasion of all time and landing with the first wave at Normandy.  An incredible 175,000 troops were put ashore that day.  The initial invasion established a beachhead, but two million allied forces would eventually enter the fray, so the beachhead had to be expanded, which meant more troops.  Two days after the initial wave landed at Normandy, Jake Den Ouden with the 357th Regiment and Nanno Hiemstra with the 359th Regiment landed at Utah Beach and joined the fierce battle to expand the beachhead.  A week after the invasion, Walter Babcock joined the Big Red One as a replacement, and two weeks after the invasion, Lawrence Namminga Sr. came ashore with the 118th Field Artillery.  June 6 (D-Day) gets all the publicity but the fighting after that day to expand the beachhead was deadly.   Tragically, Jake DenOuden was KIA four days after landing at Normandy and Walter Babcock was wounded on August 9th, but on September 3rd, he rejoined his unit in chasing the German Army back to Germany.   After a bloody battle, the beaches were secured and turned into a very important entry point for supplies to support the inland effort.  To protect the new port from air attack, Bernard Kastein Sr. and his 133rd Antiaircraft Battalion were sent in.  On July 25th, when the allies were finally ready, General Patton with Ode Odens and the 440th Armored Battalion were turned loose to chase the German Army back across Northern Europe into Germany.  Jim Kirk of the 693rd Field Artillery joined the effort on July 14, 1944.  To counter the well-known German tank threat, Bob DeRoos landed at Utah Beach with the 814th Tank Destroyer Battalion on August 8th.

As the chase progressed along northern Europe, the Springfield contingent increased with Robert Bartholomew, Lawrence Owens, Norm Kibble and Lawrence McCollum joining the chase.  Robert Bartholomew was KIA on September 12th, Jim Kirk was seriously wounded on September 21st, Lawrence Owens was KIA on December 7th, and at Aachen on the German border, Walter Babcock was KIA on October 19th.  Chuck Dawes, barely nineteen years old, was taken prisoner in late November and spent the rest of the war as a POW.  While all of this ground activity was going on, Floyd Mitchell was back in England as part of the Army Air Force 446th Bombardment Group ground contingent directing relentless and ferocious air attacks against Germany with hundreds of B-24s.

When the allies got to the edge of Germany, Hitler and his army decided one last effort in the Ardennes Forest in the Battle of the Bulge.  Springfield’s contingent on the scene was most of those mentioned so far, plus Fred Hornstra, of the 11th Cavalry who joined the defensive line on December 11.  They all played a part in stopping the German’s effort to break out and change the momentum of the war.  With all of the Springfield soldiers involved in the effort at the Battle of the Bulge, they could have conducted a very well attended ecumenical Sunday service in the Ardennes Forest right under the nose of Field Marshall Karl Gerd Von Rundstedt.  After the Battle of the Bulge, the outcome of the European War was obvious, but far from over.  Springfield’s battle tested soldiers were joined in the efforts by Tom Rupppelt on March 1, 1945.  They all stayed until the end and then played roles in the occupation force such as providing security at Nuremburg for the war trials.  Finally, Springfield’s soldiers began returning to the much calmer and less dangerous plains of Southeastern South Dakota.

While the fireworks were going on in the Atlantic Theatre, the Pacific Theatre was seeing just as much action.  The seventh fleet was put on its heels at Pearl Harbor, and despite knowing about Pearl Harbor, General MacArthur got caught flat footed in the Philippines and lost all of America’s holdings.  It was time to work our way back, regain the offensive, retake what we had lost and push the Japs back to Japan.  Just like the Atlantic Theatre, Springfield had its men sprinkled throughout the country training for a big push that would drive the Japanese back to Japan.  While, in hindsight, it was clear that after the naval battle at Midway and the battle for the island of Guadalcanal, Japan was going to eventually be plowed under by America’s might, the Japanese were not about to give up and a lot of dying had to take place before it was over. The American strategy was twofold in regaining its lost territory and defeating Japan.  One course had Admiral Nimitz and the Navy and Marines on an island hoping campaign working their way to Japan. The other had General MacArthur, headquartered in Australia, beginning  his push through New Guinea on his way back to the Philippine Islands and the fulfillment of his pledge to return to the Philippines.

Where was Springfield in all of this?  Everywhere!  In his island hopping campaign, Admiral Nimitz had marine Harold Settje in Guadalcanal, the Solomon Islands, Bougainville and New Georgia;  Merle Toyne in support activities in the Navy; Virgil Rauch in support of the 5th Marine Amphibious Unit at Iwo Jima; Ted Lindeman developing, testing, and flying the Navy’s adaptation of the Army’s B-24 Liberator; Sailor Allen Palsma KIA near Okinawa; Third Marine Division’s Wayne Barham in Guam and Jack Rich KIA in Guam.

Springfield was also there to support MacArthur’s pledge to return to the Philippine Islands.  In maybe the key Naval Battle of the war, the submarine Darter with Joe Uken aboard found the Jap Navy in the Leyte Gulf and sank two of its ships.  More importantly, finding the Jap fleet allowed the US Navy to engage and finally end any more serious threat from the Japanese Navy.  The Japs at Leyte Gulf looked at the battle as a means of changing the momentum and the US Navy looked at the battle as a way to end the Japanese Navy as a serious threat.  Thanks in a large part to the Darter Submarine with Joe Uken aboard, the Americans had their way, and in October of 1944, General MacArthur was able to make his first of two well-publicized returns to the Philippines by wading ashore at Leyte Gulf.  His second entry into the Philippines by another much publicized wading ashore occurred in early January at the Lingayen Gulf.  It occurred at the beginning of the Americans' final push to remove the Japanese from the Philippine Islands.   Jack Martin with the 160th Infantry Regiment was part of this force that went ashore with MacArthur and then turned South and spent the next six months in brutal combat removing the Japs from the South part of Luzon and all of Panay. Two days after Martin hit the shore and at the same point, Bob Slade with the 161st Infantry Regiment, entered the Philippines and turned north to remove the Japs from the North part of Luzon.

By mid-summer, it was over in the Philippines and Okinawa.  However, things did not look good because the next stop was Japan and Jack Martin’s regiment and Bob Slade’s regiment were scheduled to spearhead the invasion of Japan.  In addition, John C. Ludens, Clarence Ludens, Jake Namminga, Don Fennema, Duane Hubregtse, and Don Fryda were working their way across the Pacific to join in the invasion in some capacity.  At this point, a failed businessman with minimal education stepped in and made the courageous, but correct, decision to end the war by dropping two atomic bombs on Japan.