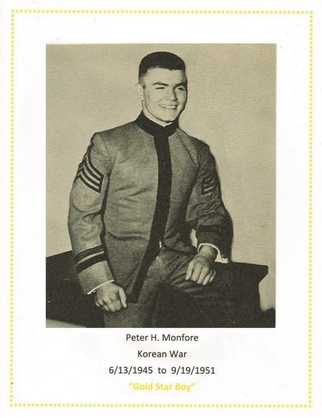 All plebes at West Point must take boxing as a physical education class.  In the old historic Arvin gymnasium, there was a large room that housed all the plebe boxers as they took their instructions.   The large boxing room was nondescript with punching bags hanging from the ceiling and the entire floor and walls covered with padding except for one small spot on one of the walls where there was a small 8 inch by 12-inch unassuming full length picture of a cadet.    There was not one other picture or any other decoration in the room.  The picture wasn’t of Douglas MacArthur, or Dwight Eisenhower, or Omar Bradley or George Patton.  The picture was of a cadet who was the product of a very small town in southeastern South Dakota (Springfield) and his name was Pete Monfore.   It wasn’t an accident that Pete’s picture was there.  He was an Eastern Intercollegiate champion boxer, a leader in the Corps of Cadets, a humanitarian, a war hero, an example of what West Point strives to produce and one of the most highly regarded cadets in the academy’s history.

Peter Howland Monfore graduated from the United States Military Academy in June of 1950 and by August found himself in Korea as a platoon leader helping the United Nation forces fight their way out of the Pusan perimeter where they had been pushed by the hordes of North Korean Army invading from the North.   In the process of breaking out of the Southern tip of Korea and regaining territory lost to the North Koreans, Lt Monfore was seriously wounded and evacuated to Japan.

After recovering from his wounds, he rejoined his division in October of 1950 in pushing the North Koreans back through Korea to the Yalu River on the northern edge of the country.  For the next year, Lt Monfore fought with the 2nd Infantry Division as a company commander.  The Chinese entered the war and pushed the UN forces back to the 38th parallel, where a stalemate developed between the two armies.  Although neither side had much success in gaining ground, the action was fierce as each side jockeyed to improve its position.  On the morning of September 12, 1951, more than a year since Pete had entered the fight, his “L” company was ordered to move to Heartbreak Ridge and take Hill 851.  “L” Company took Hill 851 but was met by two battalions of the Chinese Army and ultimately surrounded.  In the ensuing close-in fierce fight, 1Lt Pete Monfore was mortally wounded; thus, ended the short but full and glorious life of Lieutenant Peter Howland Monfore from Springfield, South Dakota.

The accolades were overwhelming as those who knew Pete became aware of his death:

“(Lt Monfore) was certainly as fine a soldier as West Point has produced.  He lived up to every part of Duty, Honor, and Country”, said Colonel J. Adams, Commanding Officer of the 23rd Infantry.  “We marveled at how many had been affected by his personality, unselfishness, kindness, helpfulness, sportsmanship, leadership, honest, integrity, thoughtfulness, love of God, and love for his fellow men.  As fine a man as ever walked the face of the earth.”  Read letters from those who knew him when finding out about his death.