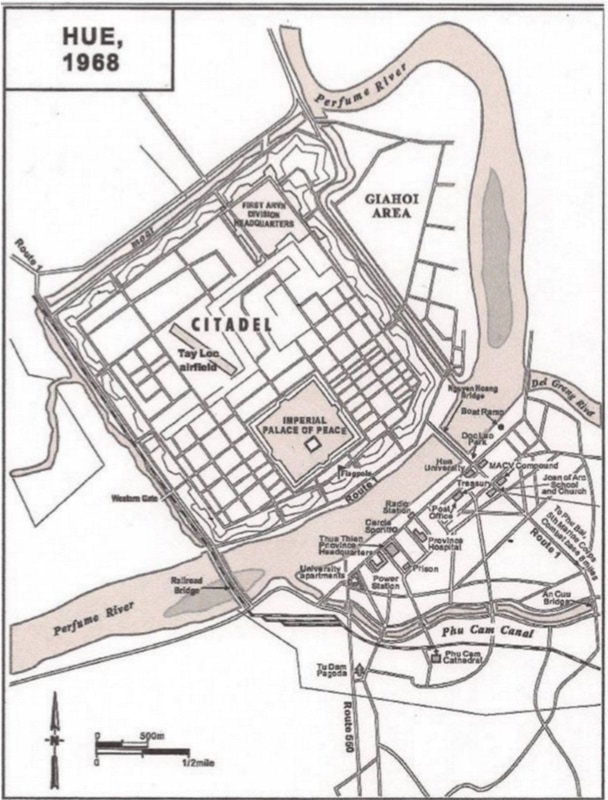 Hue was the capital of Thua Thien Province and South Vietnam’s third largest city.  It was the old imperial capital and served as the cultural and intellectual center of Vietnam.  Hue City was really two cities divided by the Perfume River.  The Old City (Citadel) was North of the Perfume River, and the New City was South of the Perfume River.  The Citadel on the North side of the Perfume River (See Map) covered three square miles, was protected by an outer wall thirty (30) feet high and ninety (90) feet thick and was in the form of a square tilted on a vertex when viewed from a North-South perspective.  It had northeastern, southeastern, southwestern and northwestern walls. (See map) The sides of the square were 3000 yards (approximately 1 3/4ths miles) on each side, and surrounded by a moat ninety (90) feet wide and twelve (12) feet deep.  The Citadel consisted of block after block off houses, parks, villas and the Imperial Palace.  Hue had been remained remarkably free of the war until the TET holiday which began on January 31, 1968.  The TET Offense was countrywide and was put down in a week except at Hue City where the North Vietnam Army (NVA) decided to make a stand.

Dan Mejstrik, a veteran from Springfield, was a hospital corpsman (medic) with third platoon of D Company of the First Battalion, Fifth Marine Regiment and was caught in the middle of the battle for Hue City during the Tet Offensive.  The battle was one of the fiercest of the Vietnam War with half the Marines entering the fray being killed or wounded.  The following is a summary of the actions of Dan’s battalion until Dan was wounded and taken out of the battle.  I have put Dan’s name in parenthesis (Dan) so he could be followed through the battle.

Feb 11 – Helicopters take two platoons of Co B, 1st Battalion, 5th Marines, from Phu Bai, the Marine headquarters eight miles south of Hue City on Route One, direct to Mang Ca compound which was in the Northeast part of the Citadel.  The rest of the battalion trucks to the MACV compound on the south side of the Perfume River in Hue City.
Feb 11 – Enemy totals 8,000 soldiers and holds half of Northeast wall and all of Southeast wall of the Citadel.
Feb 11 – Weather turns nasty in afternoon.

Feb 12 – Company A and Company B’s third platoon leave from MACV Compound on the South side of the Perfume River across the river along the moat and into the Citadel through a breach (gate) in the Northeastern wall.

Feb 13 – Company A,B, and C leave Mac V Compound on the South side of the Perfume River and in Navy landing craft arrive at Mang Ca Compound  (1st ARVN Division HQ) in the Northeast part of the Citadel.
Feb 13 – A Company leads the way against the enemy and immediately takes 35 casualties and is rendered ineffective.
Feb 13 – A Co falls back and B and C Company move forward 300 meters but are stopped by intense enemy fire coming from the Dong Ba Tower at the Dong Ba Gate.

Feb 14 –First Battalion Commander requests rules of engagement changed to allow bombing and artillery.  Request granted.  Artillery, Naval and Air called in to soften up the enemy by hitting the Tower.
Feb 14 – Late in the day, Company D (Dan) boards Navy landing craft at MACV HQ and crosses the Perfume River to get to the Citadel.

Dan Mejstrik: “I have been asked that knowing what hell I was heading into, was there any reluctance to board the landing craft and my answer was that I was scared but everyone else was going so I went too.”

Feb 15 – In the morning, Company D (Dan) is sent against the Dong Ba Tower.
Feb 15 - Artillery, Naval and Air bombardment collapse and reduce the tower to rubble, making it more difficult to eliminate the enemy from the key terrain (tower) that was so important for them to hold.
Feb 15 – Dan’s third platoon gains a toehold at Dong Ba Tower.
Feb 15 - Rest of Company D is committed and overruns the Tower.

Dan Mejstrik: “What may surprise some is that after being under fire for so long, one of the many emotions you feel is anger.  You get angry and want to kill the Enemy that is putting you through such hell.”

Feb 17 – All of 1st Battalion (Dan) continues its lethal assault on the Southeastern wall of the Citadel.  At this point, the First Battalion, under constant fire, had already suffered 47 killed and 240 wounded in just five days inside the Citadel.

Feb 18 – First Battalion (Dan) takes a break in preparation for renewing the assault on the Southeastern wall the next morning.

Dan Mejstrik: “Part of the exhaustion is the adrenalin high you are on for such a long time.”

Feb 19 – After intense bitter fighting, the First Battalion (Dan) gets near the wall.

Dan Mejstrik: “Could have fooled me!  My senses were focused totally on the danger all around me.  I had no sense of what the weather was.”

Feb 20 – First Battalion (Dan), exhausted, takes a break.
Feb 20 – In the afternoon, the officers of the battalion gather to decide the next move.
Feb 20 – Despite the reluctance of the company commanders, a night attack is planned with A company taking the lead.

Feb 21 – At 0300 hours, second platoon of A company moves out.  They initially meet no resistance, but come across a number of unsuspecting NVA soldiers that they eliminate.  The rest of the battalion (Dan) follows and in intense fighting comes within a hundred yards of the Southeastern wall.
Feb 21 – The battalion experiences random sniper and mortar fire as they approach the Southeastern wall.   One of the random mortar rounds lands right in the middle of hospital corpsman (medic) Dan Mejstrik and six or seven other Marines.  Dan immediately begins to attend to the wounded Marines when he notices that blood was appearing, out of nowhere, on the Marine he is working on.   He finally realizes he has been hit by shrapnel from the mortar round and he is seriously wounded.  He instructs some of the Marines in patching him up and is medevac’d out.  He loses an eye and has other shrapnel injuries.  The war was over for Dan Mejstrik. He spends a number of months in rehabilitation and returns home.

Dan Mejstrik: “Evacuating the wounded was a real problem. In some cases, their liters were put on tanks for a bumpy ride out of the combat zone.  One bit of luck for me was that I was evacuated on a helicopter full of colonels that just happened to be leaving at that time.”

The battle for Hue City rages on for a few more days.  The Imperial Palace is taken and the rest of the city is cleared out of enemy soldiers.  The city has been destroyed.