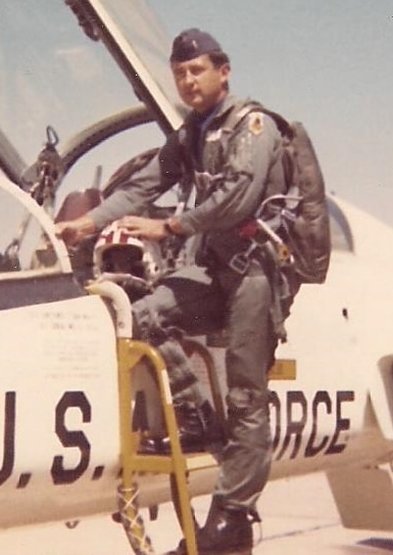 To conduct its clandestine operations against the North’s flow of supplies along the Ho Chi Minh Trail, the 602nd Special Operations Squadron and its prop A-1s were deployed at Nakhon Phanom Royal Thai Air Force Base (NKP).  One of the pilots in the 602nd was Daryl Heusinkveld of Springfield, South Dakota.

In his youth, Daryl had the good fortune of living next to Dr. Ted Lindeman, a WWII Navy pilot, and having a father who also had flying in his blood.  The passion for flying came from these two and at an early age, Dr. Lindeman taught both how to fly, enabling them to get their private pilot’s license.  At the same time, Daryl finished college and joined the Air Force on November 17, 1967.

Daryl received his officer’s commission at Lackland AFB before heading to Webb AFB in Big Spring, Texas for a year of pilot training.  Next, Daryl was sent to Hurlburt Field in Fort Walton Beach, Florida where he spent three months learning to fly the A1 Skyraider, a single radial engined, single seat, propeller driven airplane, capable of carrying more munitions than the World War II B-17 four engine bomber, and far different from the supersonic jet trainer he had just been trained on.  At the conclusion of this training, Daryl and four others headed for Southeast Asia with A1 assignments.  Along the way, they stopped at Clark AFB in the Philippines for jungle survival training where Daryl amazingly crossed paths with Don Irish a friend and pilot from Springfield.

The first half of Daryl’s year at “Naked Fanny” was spent supporting ground troops over the northern part of Laos.  Working with, and as forward air controllers, each mission consisted of four to five hours of daytime flying providing close air support.  Upon arrival at the target area, Daryl’s A-1s, flying in twos, would pick from the primary or secondary targets and drop their ordnance followed by marking other targets with white phosphorus rockets for the F105s and F-4s that were part of the attack force.  The targets were usually truck parks or ordinance storage areas and roads that would be destroyed and functioning again the next day.  The A-1s flew in coordination with F105s and F-4s which demanded vigilance to allow for the vast difference in aircraft capabilities.  .

The second half of Daryl’s tour was flying into Southern Laos and consisted of the night time “lights out“ interdiction of the illegal flow of enemy supplies over the Ho Chi Minh Trail, the lifeline of support from North Vietnam to the North Vietnam and Viet Cong armies fighting in the South. Using infrared vision, C123s and C130s from higher altitudes spotted and directed Daryl and the A-1s against enemy targets.  On all of these missions, the North Vietnamese used 23 and 37 MM antiaircraft guns that shot seven round clips of high explosive (HE) ammunition at the A1’s.  They also used “tracer” ammunition which made it possible to see the rounds as they were coming up at the A1. It was on one of these missions that Daryl came closest to being hit.  One seven round clip came so close  to Daryl that from his canopy he heard four of the rounds travel below his A-1 and three above.

Flying A-1s in Southeast Asia during the Vietnam War was a dangerous job.  In addition to the obvious threat from the enemy firing antiaircraft weapons at the planes, the possibility of errors and aircraft failures were a continual threat.  Half of the losses of aircraft were from shoot downs and half from errors or aircraft failures.  Evidence of this was very real for Daryl as of the five that trained in the A1 together and made their way to Southeast Asia a year earlier, Daryl would be the only one to survive and return home.

On May 13, 1970 Daryl returned home having officially not existed the past year but actually having flown 213 missions and experienced more excitement, adventure and danger than he would experience for the rest of his life.  Back in the United States, Daryl was assigned to and would spend the last 2 1/2 years of his commitment as a T37 instructor pilot at Moody AFB in Valdosta, Georgia.

Daryl separated from the Air Force on November 17, 1972.  He was hired as a Delta Airlines pilot and spent the rest of his life raising a family and indulging his passion for flying by building his own plane, other flying activities and flying with Delta until FAA mandated retirement.