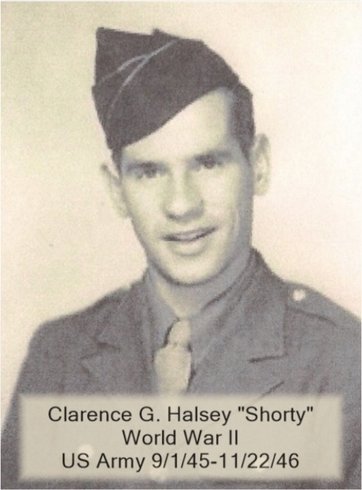 As the wars in the Atlantic and Pacific Theaters continued in the early 1940’s, young men and women drawing closer to the age of induction were wondering what the future held for them.  Glen Halsey, known to all locally as “Shorty”, watched and waited as most of his friends around Springfield either volunteered or were drafted for service.  Shorty knew that, when he turned 18 years old, he was going to volunteer.  He had a deep desire to serve and defend his country as soon as he was old enough.  Shorty grew up on the family farm east of Springfield and acquired his elementary education at Independent and Highland rural schools.  He was working as a farm hand and had a trucking business when war broke out with Japan’s attack at Pearl Harbor.  Shorty registered for the draft but volunteered for the army shortly after his 18th birthday.  Because of a defective optic nerve in his eye, he was rejected.  Disappointed, but not deterred, Shorty volunteered for the Navy, Coast Guard and Sea Bees; but received the same results.  He felt dejected and defeated.  It bothered him a great deal to see even more of his friends going off to war while he was prevented by the “red tape”.  He acquiesced and returned to the farm, diligently following newspaper accounts of all the military campaigns and wished he was there.

By early spring of 1945, it was evident to all, except the Nazi high command, that the defeat of the Axis forces in Europe would occur in a matter of months.  In spite of Hitler’s wonder weapons, such as the V-2 rocket and jet fighter, allied forces were overwhelming the German army.  The U.S. and English advance from the west, the U.S. and French advance from the south, and the Soviets’ advance from the east, surrounded the beleaguered remaining German army.  There could be no possible escape.  The Pacific Theatre was a different matter.   As the Allies advanced closer to the Japanese home islands, the ferocity of the defenders grew ever more fanatical.  Allied casualties were atrocious.  In the battle for Iwo Jima, the U.S. sustained 26,000 casualties, which exceeded those of the Japanese defenders.  At Okinawa, Allied casualties exceeded 50,000.  With Japanese use of Kamikaze attacks and their Emperor’s vow  to defend the Japanese homeland to the last person, General Douglas MacArthur and U.S. military strategists were planning what was anticipated to be the biggest battle of all. The invasion of Japan, code named Operation Downfall, was scheduled for November 1, 1945.   It was estimated that over one million allied troops would be required.   The U.S. military was in need of new recruits, and in late spring 1945, Halsey received his draft notice.  Shorty again went to Ft. Snelling for his entrance physical and this time passed with flying colors.  He was inducted into the U.S. Army on July 25, 1945.  He went by train to Camp Crowder near Neosho, Missouri to receive his “condensed” six week basic training.  Ironically, Shorty acquired the Expert Marksman destination on the rifle range in spite of his eye impairment.    Halsey hesitantly anticipated that he, together with the other new recruits, would soon be part of the invasion force of Japan.  But, to his great relief, the war with Japan came to a sudden and unexpected end.  The U.S. election to use the atomic bomb on Hiroshima, August 6, 1945, and on Nagasaki, August 9, 1945, lead to the Emperor’s surrender announcement on August 15.  The formal signing of unconditional surrender by the Empire of Japan to the United States occurred on September 2, 1945.

Halsey completed basic training and was then selected from among the new recruits to be a boot camp instructor.  He was promoted to Corporal and reassigned to Camp Sam Houston near San Antonio, Texas, where Corporal Halsey was responsible for and oversaw the basic training of new recruits.   The U.S. now had to reconfigure its military from combat to an army of occupation.  The camp would receive inductees in groups of 160 men and a new group would arrive about every three days.  His duties as a boot camp instructor covered all skills and aspects of the basic training program.   He successfully completed this duty over the next year and was separated from active duty and honorably discharged on November 22, 1946.

Corporal Clarence Glen “Shorty” Halsey was awarded the World War II Victory Medal and the American Theater Ribbon.  Shorty returned to Springfield following his service and resumed his career in the farming and trucking businesses.    When asked if there was any particular event that stands out during his military service, Shorty responded:   “ I was glad I was allowed to finally get in.  I was proud to serve!”
Jim Kirk with assistance from Glen “Shorty” Halsey