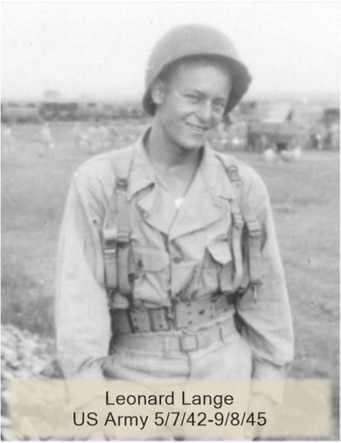 As WWII dragged on in the Atlantic Theater through 1943 into 1944, everyone knew that an invasion was coming with the Allies beginning the process of throwing the Axis out of its gains back behind their borders.  That is where the agreement ended.  President Roosevelt and the United States would have to sign off on the final decision of when and where to invade, but there was tremendous pressure coming from Stalin and Russia to immediately open a second front in the Allies’ East to take some of the pressure off the Eastern front where the Russians were paying an awful price fighting the German war machine. Winston Churchill and England wanted an initial front in Southern Europe to direct the threat away from England and to soften up the Germans before the main invasion began across the English Channel from England into France.

Whatever decision was made didn’t immediately affect Leonard Lange of Springfield, South Dakota.  He, along with millions of other Americans, were preparing for a role in a mammoth unknown effort.  Leonard was inducted into the United States Army on May 7, 1942 and received training throughout most of 1943 at Fort D.A. Russell, Texas (mortars), Camp Pickett, Virginia (small arms), and Camp Gordon Johnson, Florida, the Alcatraz of the Army (demolitions and close order combat).  On August 13, 1943, PFC Leonard Lange and the rest of the 81st Chemical Mortar Battalion sailed for England and eight more grueling months of training.

As 1944 moved through the year to June, PFC Leonard Lange still did not know that he was about to join an exclusive club of Normandy H+50 minutes survivors.  The H+ designation would come to be known by most Americans in the future as a way to express the harrowing experience of many veterans.  Anybody who had H+ in their experience had been subjected to great danger.  Those, like PFC Lange, who were H+ were in the first wave and probably had one of the most dangerous roles in American military history.  In landing in the first wave at Easy Green on Omaha Beach, PFC Lange would lead a long list of Springfield soldiers in a disproportionate contribution in moving Hitler and his war machine back across Europe to the German borders.  It has been said that there were so many Springfieldites taking part in moving Hitler out of Germany that a well-attended ecumenical Sunday service for just Springfield soldiers could have been held in the Ardennes Forest during the Battle of the Bulge.

At 0720 on June 6, 1944, the craft containing PFC Leonard Lange and D Company of the 81st Chemical Mortar Battalion, under an incessant hail of machine gun, mortar and artillery fire, beached on Easy Green of Omaha Beach at Normandy.  Before getting off the beach, D Company would sustain many KIA and perform many acts of heroism that would earn many medals.  After one week of being subjected to intense shelling and machine gun firing, PFC Lange’s outfit had taken out a series of enemy strong points to clear the way for infantry units.

The beachhead was finally secured on June 14th and until June 26th, Leonard and his outfit fought their way through the Battle of the Hedgerow facing heavy and fierce counterattacks, maybe the most bitter fighting of the entire European campaign.  On June 17th, First Army listed the 81st Chemical Battalion as one of the units eligible for unit citation for extraordinary heroism and outstanding performance of duty.

On August 20, General Patton’s Third Army finally broke through the German defense line of southern Normandy and the rout was on.  In chasing the Germans across Europe, PFC Leonard Lange and the 81st Chemical Mortar Battalion saw significant action at the Great Falaise Trap and the Battle of the Roads. On September 13, PFC Lange’s D Company was the first company of the 81st to reach and fire a mission in Germany.  From that point in time until February 18 of the next year when PFC Lange’s company D was disbanded, the 81st saw continuous action at Gorze, Bouxieres, Metz, and the Saar Valley.

After the bridge at Remagen was secured on March 10, 1945, PFC Leonard Lange’s new company B of the 81st was an important part of the drive to the Rhine.   The drive picked up speed and began covering as much as forty miles a day.  Mainz fell on March 23 and the Rhine was crossed on March 27.  During this period, PFC Lange barely missed being seriously injured when a fellow soldier was killed right beside him.

On April 7, 1945, the combat part of the war was over for PFC Leonard Lange.  Somehow, he had survived.  PFC Lange received the Bronze Service Arrowhead, Good Conduct Medal, Distinguished Unit Citation Badge (equivalent to the individual Distinguished Service Cross, one step below the Medal of Honor), European Theater Serve Medal, four overseas service bars, a No Time Lost Under AW 107 lapel button, and four discharge emblems.  After doing some Military Government work in Austria and Germany, PFC Leonard Lange was discharged on September 8, 1945 and returned home to Springfield, South Dakota where he eventually went to work for twenty-one years for the Bon Homme County Highway Department.  Leonard spent the rest of his life quietly providing for and raising a family and reminiscing about the most spectacular experience anyone could imagine.

II - BATTLE HONORS - 3. As authorized by Executive Order No. 9396 (sec. I, Bull. 22, ED, 1943), superseding Executive Order No. 9075 (sec. III, Bull. II, WD, 1942), citation of the following unit in General Orders No. 40, Headquarters 1st Infantry Division, 17 July 1944, as approved by the Commanding General, United States Army forces in the European Theater of Operations, is confirmed under the provisions of Section IV, Circular No. 333, War Department, 1943, in the name of the President of the United States as public evidence of deserved honor and distinction. The citation reads as follows:

“The 81st Chemical Battalion, Motorized, is cited for outstanding performance of duty in action. In the invasion of France, the mission of the 81st Chemical Battalion was to furnish close mortar support for the two leading assault regiments. In the accomplishment of this mission, the 81st Chemical Battalion landed at H 60 minutes on D-Day, at which time the beach and harbors were under incessant machine gun, artillery, rocket and mortar fire from the enemy. Underwater and beach obstacles were encountered as the landing craft approached the shore and in the advance from the landing craft to the beach. When two LCVPs in which part of the battalion was landing sank from enemy shell hits, the men of the 81st Chemical Battalion transferred their mortars, ammunition, and equipment from their own landing craft to an LCM, and under constant shelling managed to land the equipment. In another instance, when their landing craft sank, the men, by their fierce persistence in the face of great odds, swam ashore, towing with them two mortars and two mortar carts which previously had been made buoyant by life preservers. Though numerous casualties were suffered, men of the 81st Chemical Battalion were not deterred from the accomplishment of their mission, and upon reaching shore with the loss of only one mortar, continued in support of the infantry for twelve days without relief. Such heroism and gallantry, in the face of tremendous odds and unusual and hazardous conditions, are in keeping with the traditions of the service and deserving of the highest praise.”