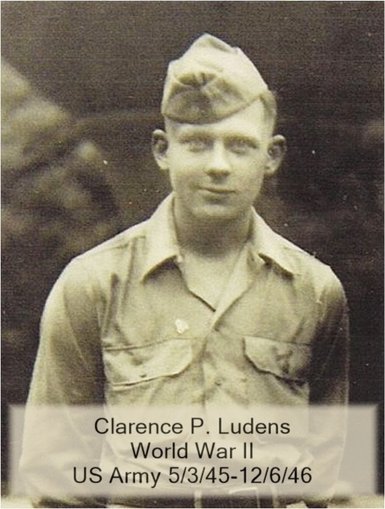 The track record for nation building the past 100 years, especially the past quarter century, has not been good.  An exception to that trend has been the miracle worked in Japan right after World War II by General Douglas MacArthur, a man whose brilliance throughout his life was matched by his large ego and occasionally by a spectacular blunder.  Probably the least recognized, but maybe his greatest accomplishment, is the reconstruction of Japan.  Out of General MacArthur’s direction, Japan miraculously rose from the depths of despair from defeat in WWII to a democratic industrial free market giant.  In order to do his work, MacArthur needed a stable Japan immediately after the end of the war.  As usual, MacArthur relied on a supply of reliable competent young men from America.  One of those thousands of young men there to do his part in providing stability for the reconstruction of Japan was Tec 4 Clarence Ludens from Southeastern South Dakota.

Clarence began his military life on May 3, 1945 by taking a troop train to Jefferson Barracks, Missouri to be issued his military equipment and to Camp Fannin, Texas for thirteen weeks of Infantry training. The war in the Pacific was nearing its end; but looming in the future was the inevitable invasion of Japan to end the war for good.  The Japanese soldiers had a reputation for not surrendering, so Clarence and the rest of the trainees anticipated fierce battles ejecting the Japanese from caves and hideouts on the home islands.  Thanks to President Truman’s use of the atomic bomb, the anticipated carnage on the Japanese home islands was averted and thousands of American lives were saved.

After a ten day furlough, Clarence found himself headed for Seattle to catch a boat for Japan as an occupation force instead of the much more deadly invasion force that he initially anticipated.  After enduring storms and mine fields, the “Admiral Coontz” finally reached Japan and Clarence was assigned to the 33rd Division Signal Corps of the 8th Army.

Of his time in Japan, Clarence observed, “The trip to Japan could have been a nightmare of more death and destruction; instead it was a memorable and not unpleasant experience.  Horrible as it was, I feel the atomic bomb was an economical way to end the war both in terms of lives lost and damage done.  Complementing this was an excellent and almost flawlessly executed occupation plan.  I was one of those who benefited a great deal from the actions of two men. ‘Thank you, Harry Truman and General Douglas MacArthur.’  I never had to fight for my country, for which I am thankful, and I will never be able to fully express my gratitude for all those who did fight and especially those who gave their lives to preserve the liberty and freedom that we all enjoy.”

General MacArthur’s orders to the occupying forces were to treat the Japanese people with dignity and respect, the way Clarence had always treated his fellow man.  Clarence was assigned to the 8th Army Radio Transmitter site about half way between Tokyo and Yokahama until it was time for him to return to the United States.  During that time, Clarence developed a friendship with a Japanese citizen that made it clear to him that in the end we all share a common humanity.  Clarence worked with diesel generators for the signal corps which required operation and maintenance of the machines.  To make up for the shortage of parts, Clarence made use of a local Japanese machine shop and the talents of the experienced machinist.  Without speaking the same language, the two would work together to produce the required part or make the repair.  Working together to solve a problem and developing a final product to solve the problem resulted in the two developing a bond of friendship.  When it was time for Clarence to return to the United States, the machinist came to Clarence’s barracks and delivered a note to him and the two said their goodbyes.  Clarence found an interpreter and had the note translated.  It read that the machinist wanted Clarence to know how much he appreciated Clarence’s friendship and the way Clarence had treated him in their relationship and dealings.  Instead of fighting Japanese to the death on the home islands, Clarence had an experience of friendship with a Japanese citizen that would live with him forever.

Finally, on October 18, 1946, Clarence boarded the US Falcon, a Merchant Marine ship, for the trip home on what seemed like a pleasure cruise.  He was discharged from the service on December 6, 1946 and returned to Springfield to a career of farming and raising a family.