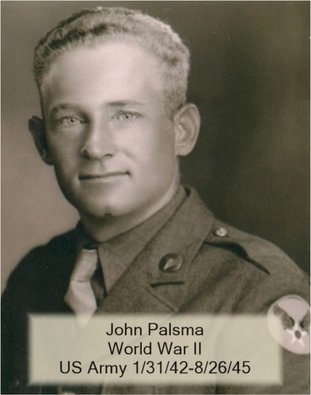 Germany’s plans for conquest in World War II were dependent upon mobility.  England’s ability to stop Germany was also dependent upon mobility.  For both sides, mobility depended on fuel from the Middle Eastern oil fields to fuel their war machines and access to the Suez Canal to freely move troops and equipment.  By 1943, Great Britain was just barely keeping Germany away from the oil fields and the Suez Canal, Stalin (Russia) had sustained much of the 20 million in lost soldiers and civilians it would lose on the Eastern Front and Eisenhower was looking for a place to test his “new to the war” untested American army preparing for the ultimate prize, the invasion of Northern Europe.

While all of this was going on in North Africa, John Palsma was working a farm and picking corn in Iowa.  He enlisted in the United States Army on January 31, 1942.  After boot camp at Camp Robinson, Arkansas, he took his advanced training in medical support at Meridian Air Base in Mississippi where he became a member of the Army Air Corp.  He was assigned to the medical support staff of the 381st Bombardment Squadron of the 310th Bombardment Group of the Twelfth Air Force and spent a few months at South Carolina Air bases before shipping to North Africa in January in 1943.

In November of 1942, Eisenhower opened a second front in North Africa (Operation Torch) in the Mediterranean Theatre of Operations (MTO); what Winston Churchill called the “soft underbelly” of Europe.  The action relieved some of the pressure the Russians were experiencing on the Eastern Front, helped England stop Germany from seizing the Suez Canal and Eastern oil fields, and gave the American Army some valuable experience for the ultimate invasion of northern Europe.

In the last half of 1942 and the beginning of 1943 the 381st Bombardment Squadron began converging on Berteaux Airfield, Algeria, in North Africa.  From there and subsequent bases in North Africa, they would provide vital air support for the second front by conducting air raids on Rommel’s retreating Afrika Korps. During this time period, the squadron was involved in the reduction of the islands of Pantaleria and Lampedusain, the invasion of Sicily, and the landing at Salerno.
As the Allies pushed the German Army from North Africa, the Germans retreated to Sicily and then to the Italian peninsula. To stay close to the action, on December 10, 1943, the 381st moved to Ghisonaccia Airfield on the island of Corsica in the Mediterranean Ocean within 100 miles of enemy held territory.

On May 23, 1944, all of John’s training and courage were tested when he was faced with an emergency described in the “secret” (now unclassified) history of the 381st Bombardment Squadron (abridged).

“At 19:20 hours on May 23, 1944, there was a tremendous explosion. Concussions from it could be felt more than a mile away.  Armament men were unloading fragment bombs from an aircraft preparatory to reloading it with four 1,000 pound bombs.  One of the frag clusters accidentally went off and the plane caught fire.  Corporal Parker and Private John Palsma (medics) drove their ambulance to the plane as the frag bombs were going off.  They jumped out of their ambulance and extricated an injured man, put him on a stretcher, and made off on foot.  They barely reached a point of safety when they were thrown to the ground by the explosion of the 1000 pound bombs.  In all, 6 men lost their lives and the plane and ambulance were reduced to scrap metal.”

John, his partner and the injured man survived.

John returned to the United States on August 16, 1945 having attained the rank of corporal.  He had earned the Soldiers Medal, the American Theater Medal with seven battle Stars and the Good Conduct Medal.  He was discharged at Camp McCoy, Wisconsin on August 26, 1945.  John returned to Springfield where he quietly spent the rest of his life farming and raising a family.  John Palsma passed away on November 24, 1998 while a resident of the Good Samaritan Home in Tripp, South Dakota.