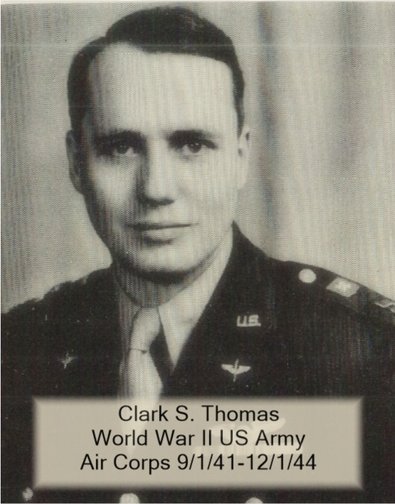 World War II was fought in four basic theaters of operations: Atlantic (Northern Europe); Mediterranean (Southern Europe and North Africa); Pacific (Asia and Pacific Islands); and Eastern (Eastern Europe and Russia).  The United States fought in all but the Eastern Theater and the heavy bomber airplane was a major weapon in the Atlantic and Pacific theaters.   At the beginning of the United States entry into the war, the US’s priority was the Atlantic Theater.  The bomber was a very important weapon in this theatre and the B-17 Flying Fortress and B-24 Liberator were the bombers primarily used in this theater.  With ranges of 2000 miles, the bombers were adequate for the Atlantic Theater.

In recruiting the crews to man the B-29s, the Army Air Force found a farm boy in Southeastern South Dakota.  Clark Thomas had spent his entire life with his feet on the ground but would spend a great deal of his next four years over 30,000 feet above the earth.  In October of 1941, Clark was inducted into the Army Air Force cadet training program in Omaha, Nebraska, having graduated from South Dakota State University where he had been in the Reserve Officer Training Corps.  From that point, he had training stints at Parks Air College in East St. Louis, Missouri and in January of 1942 at Kelly Field in San Antonio, Texas where he took navigator training for heavy bombers.  He graduated on July 25, 1942 as a Second Lieutenant and was assigned to the 45th Bomber Squadron in Guatemala City, Guatemala where he flew patrol duty to protect, from Japanese attack, the only link between the West and East coasts of the United States, the Panama Canal.

In July of 1943, Clark returned to Pratt Army Air Base in Pratt, Kansas, USA where he began a close relationship with the first B-29s.  After extensive training and testing, the B-29 was introduced to combat in the Pacific.  The 40th Bomber Command was transferred to India where from advanced bases in Western China, Clark flew bombing raids over Japan, Formosa, Singapore, Rangoon, and Eastern China.  Because of the distances involved, the raids were very complicated and involved coordination and stops for fuel and bomb loads.  Clark was on the second B-29 bombing raid into Japan.

In the spring of 1945, Clark returned to Murock Air Base in California where he spent the rest of his years in the military service, training new B-29 bomber crews.  Clark was discharged from the Army in the fall of 1945 with the rank of major.  During his service, he was awarded the Air Medal with Oak Leaf Cluster, Distinguished Flying Cross, and Presidential Unit Citation.  With his feet firmly back on the ground, Clark used his military pay for the down payment on a farm near Springfield, and spent the next 35 years farming and raising a family.  Having helped make history in WWII, Clark retired in 1980 and became the curator of Springfield Historical Museum.  When asked to describe Clark, a friend close to Clark described him as a prototype of Tom Brokaw’s greatest generation.